Is Knowshon Moreno prone to fumbling?

This is a question I've been asked many times in the last several weeks.  Given that the Broncos invested the 12th overall pick in this year's draft on Moreno, it's an important question.  Moreno--barring injury--is going to be this franchise's primary running back for several years to come. You want this guy dropping jockstraps and jaws, not footballs.

We can answer all of these questions with a handy little contraption called the Tiki Barber Slip 'N Slide Index.

Tiki Barber, for those that may not remember, was known as a fine running back for the New York Giants until his early retirement after the 2006 season.  But he was also known for a few other things.  First, he liked to criticize his former teammates and coaches--Eli Manning, specifically.    Second, the Giants won the Super Bowl the year after he left. Third, and most important for our purposes, Barber was well-known for having trouble holding onto the football.  In fact, his problems were so severe that during one 4-year stretch between 2000-2003, Barber put the ball on the ground 35 times. He was truly the Slip 'N Slide of NFL running backs.  So this Index is named in honor of him.

The Tiki Barber Slip 'N Slide Index is simply the number of fumbles as a percentage of total carries.  It's quite easy to follow. However, there are two things you´ll want to know about this index.  First, we use Fumbles as opposed to Fumbles Lost, because it's a better predictor of a tendency towards fumbling, since recovering fumbles is almost completely random.  And second, we are presenting the stat as a ratio instead of a number so that we can compare running backs with more carries to running backs with less.  Just as it's silly to say one quarterback has more touchdowns than another because they have more attempts, it's both incorrect and insidious to suggest another running back fumbles more often if they have more carries.   Thus, the stat has to be a ratio.

Let's walk through a simple example using the man himself, Tiki Barber:

So Barber fumbled the ball in his career 2.39% of the time, or on average, every 42 times he carried the ball.  This may not seem like a lot, but it really is, as we will soon see.  Lucky for Barber, he fixed his fumbling problem late in his career.  During the bad four-year stretch mentioned earlier, this ratio was a whopping 3.64%.  This was every 27 carries.

Now we can perform the same calculation with Knowshon Moreno.  Keep in mind that this is a relatively small sample size, but it's not so small that we can't compare it to other running backs.  Again, this is the reason for the ratio.  Here is the up-to-date statistics for Moreno through Week 12.

One way to judge Moreno is to compare him to the rest of the league.  Here are the league averages over the last two seasons, along with 2009 (through Week 11).  I restricted my analysis to those players with a minimum of 100 carries.

The League Index varies between 1.16%  and 1.39%.  Given Moreno´s Index of 2.48%, we can reasonably conclude he´s turning the ball over more often than he should be--when judged against the league.

But don't all rookies struggle with the learning curve of the NFL?  The kinds of carries that they get in space during their college careers simply don't exist in the NFL.  Therefore, wouldn't it make sense that running backs fumble more often during their rookie season?

We can answer that question as well.  Here are the Indexes for the rookie seasons of running backs with at least 100 carries from 2004 until 2009 (excluding Moreno,of course) : 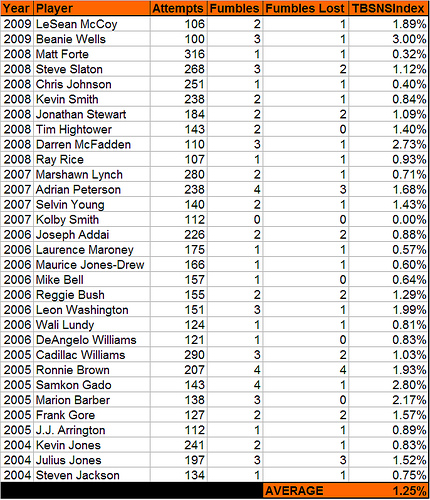 It appears that, on average, rookie running backs tend to fumble at the same rate as the rest of the running backs in the league.  Certainly, there are some interesting rookie exceptions like Darren McFadden, Adrian Peterson, and Beanie Wells, but most rookies seem to do a decent job.   From this list, we can maintain with confidence that Moreno has been fumbling at a rate higher than the average rookie.  However, there certainly have been rookies who have fumbled more in the past several years.

Lessons from Davis, Portis, and The Marine

Despite Moreno's numbers, one shouldn't be overly concerned.   That's because we are probably judging him a little too early. His current number of carries (161) averages out to approximately 14.6 carries per game.  If he keeps up this pace, he'll have 234 total carries for the season.  If he doesn't fumble during this time, his Index will drop from 2.48% to 1.71%. Even if Moreno fumbles once during this stretch, the Index will drop to 2.14%.  Neither is perfect, but manageable.

But more important than this is what we can learn from former successful Broncos running backs of the recent past.  Here are the TBSNS Indexes of the rookie seasons of Terrell Davis, Clinton Portis, and Mike Anderson when compared to their entire careers.

For all three, their fumble stats tended to drop as they continued through their careers.  In fact, these Broncos greats aren't uncommon.  I found the same trend with others like Marshall Faulk, Edgerrin James, Brian Westbrook, Jamal Lewis, and Fred Taylor.  After their rookie seasons, they tended to fumble less often, eventually fumbling at rates closer to the league averages we've seen.

So if we looked at Terrell Davis during his rookie year, we might say he had a tendency to fumble more often than he should. But by the end of his career, there was no such worry.  The same was true of Clinton Portis.  Mike Anderson didn't fumble as often as Davis and Portis, but the trend was still there.

In other words, Moreno has time to regress to the mean.  Or better.

And, like Barber, he's got coaching.   In Barber's case, Tom Coughlin taught him to hold the ball with his arm higher and tighter in a curl position.  This made his arm stronger and his fumbles disappeared almost overnight.  For Moreno, things aren't nearly as dramatic (he had no fumbling history in college), but if a problem does develop, it can be fixed by Bobby Turner and Josh McDaniels.

We all saw the other night against New York how special a runner Moreno can be (for a fine analysis of Moreno's yards/carry and comparisons to other backs, check out legendarywalton's excellent post here).  A runner like this doesn't come around every year.   And Russ Hochstein's knee won't be waiting for him after every goal-line run.