Getting the Berger Picture: Why Josh McDaniels is Smarter Than You

Share All sharing options for: Getting the Berger Picture: Why Josh McDaniels is Smarter Than You

If you were inside the head of Josh McDaniels, you might be tempted to tell everyone how smart you really are.

Then again, if you were Josh McDaniels, you'd be smart enough to shut up and keep your knowledge to yourself.  Al Davis has spies everywhere (look behind your bushes right now if you think I'm lying), so there's really no need to give up trade secrets.

During the bye week, McDaniels waived Punter Brett Kern and replaced him with (let's just say it) journeyman punter Mitch "Where's the Beef?" Berger.  In a seemingly puzzling move, Denver's starting punter was on the street.  We can all sleep well, however, knowing Kern was picked up by Tennessee in a few days.  The bad news for Kern is that he's not going to the playoffs this year.  The good news?  He'll get plenty of practice kicking with Vince Young under center.

Things looked even stranger after the Baltimore game last week.  Berger didn't exactly shred it up like Keanu Reeves on a tasty wave.  He was criticized for his slow delivery, and his lack of leg strength, averaging a paltry 38.4 yards/punt.  And it's not as if this average was skewed.   Berger had 8 punts.  He punted so many times they are considering waving his entrance fee to the next Ray Guy kicking camp.

So why did McDaniels do it?  Why, Josh?  Give us an explanation.

McDaniels isn't talking, you say.  Well, I guess you'll have to settle for the next best thing:  stats.

Right now, as you are ironing your Eddie Royal jersey, hundreds of thousands of soon-to-be-unemployed MBA students are learning a little statistical technique called regression.  They use it to try and determine the relationship between stock prices and the S&P 500 or individual stocks (good luck!).  You don't have to know the math (certainly Raiders' fans don't), nor do you have to be an MBA student to apply this same technique to determine relationships between different football stats.  If you read The Football Outsiders or Advanced NFL Stats, you will see a lot of this kind of thing.

The part of this regression analysis that shows us the relationship between two variables is called the correlation coefficient. Don't worry about terminology.  Essentially what we are asking ourselves is, what stats, if any, from the punting game, correlate to winning?  It's as simple as that.  The correlation coefficient (and now let's release you from this stupid terminology and call it correlation) can give us a simple, but useful guide.

Let's walk through an easy example.  Let's say we wanted to determine if there was a relationship between IQ and the number of years someone was a Raiders' fan.  If you did a regression analysis on the data, and the correlation coefficient came back at -.934, we would say that there was a very strong negative relationship between the level of IQ and the number of years as a Raider fan (within that population). In short, one might be inclined to argue that the longer one was a Raider Fan, the dumber they got.  In fact, I just did.

And you thought stats were boring.

Correlation Between Winning and Punting

For the purposes of this analysis, I used 3 NFL seasons (2006-2008).  I simply correlated a variety of punting statistics to team wins.  Before we look a the results, remember one things all stats geeks like to yell from the mountaintop (usually, after getting out of a college stats course): correlation is not causation.  True enough, stats geek, but it can help guide us to relationships that we might not be aware of.

Here were the results of the analysis.  All of these stats are correlated to team wins from 2006-2008:

Percentage of Punts Not Returned: .323

So what do these numbers really tell us?

Someone might be tempted to say, "I'd rather have a punter who kicked the ball on average 50 yards every punt than a punter who kicked it 10 yards with no return."  Although correct, this is not what we are talking about.  We are talking about the NFL, in which the difference between the league leader in punting and the league average is about 4 yards.   This isn't pee-wee football.  This is the NFL.  These guys can all punt.

Which brings us back to Kern and Berger.

Now that we've established that a large punting average is less important than limiting the opportunities your opponent has for a return, we can safely judge our two contestants.  And here is where the true genius of McDaniels comes in.  First, let's look at the 2008 numbers of Kern and Berger side by side using the same statistics from above.  I've taken the liberty of highlighting those stats that are the most relevant. 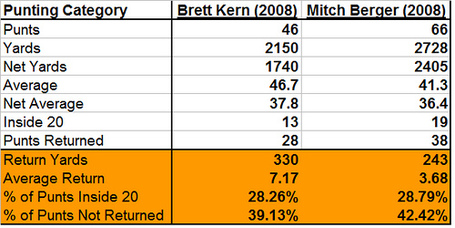 Berger clearly puts the ball inside the 20 more often, has better hang-time (hence the higher percentage of punts not returned), and finally, his punts result in less return yards per play, all of which are more important to team wins than Average or Net Average.

Kern's big leg would be more important in a hypothetical NFL, in which all punt returners fair caught every play or let the ball bounce and roll.  But unfortunately, they don't do this.  Many are deadly, catching the ball on the run, and if you outkick your coverage unit too often, you're just giving your opponent an opportunity for a big play.

So let’s review. During the bye week, Josh McDaniels released a punter with a big leg.  He replaced him with a punter who drops the ball inside the twenty more often, limits the number of chances the opponent has for a big return, has a higher hang-time, and when the opponent does return the ball, the yards the opponent gets are less.  And all of these things have a greater correlation to winning than does the simple act of booming a kick as far as possible.  It appears as if McDaniels is interested again  in just one thing: winning.