Share All sharing options for: The Dude Abides...The Stats That Don't Lie, Week 12

The Stats don't mean what they say on Thanksgiving, Mom. You know that. That's what the day's supposed to be all about, right? Torture.--Holly Hunter

Thanksgiving and football.  It didn't get much better in Week 12.  Like you and your family, some teams greedily feasted on the mashed potatoes (Dallas on Oakland), some teams kicked up their feet and loosened their belts (Green Bay feeling fat and bloated as they coasted over Detroit), and some teams simply went straight for the pumpkin pie (New Orleans tasting a sweet victory over New England).

Your Denver Broncos stuffed the New York Giants like turkeys.

Welcome to the Week 12 edition of The Stats that Don't Lie.  These stats are your extra gravy.  They are the statistical whipped cream that you squirt into your mouth right from the can.  They are the stats that you think about as you ignore your in-laws and fall asleep on the couch.  As always, they are Turnovers (giveaways to be truthful), Field Position, Time Of Possession, and 3rd-Down Efficiency.

Before we jump in, you might have noticed that you are getting this edition on Tuesday rather than the normal Wednesday. That's because Ted Bartlett was feeling a little under the weather, so we decided to switch days.  Ted should be well enough to bring you his Shallow Thoughts and Nearsighted Observations tomorrow.

Until then, you're getting stats.  And you're going to like it.  Don't make me send you to eat at the kids' table.

The View From the Airplane

The Turnover-Margin-Bar Graph rarely lies.  I enjoy putting this up each week because if you take nothing else away from these columns (and that's quite likely), simply take this picture and burn it into your brain: 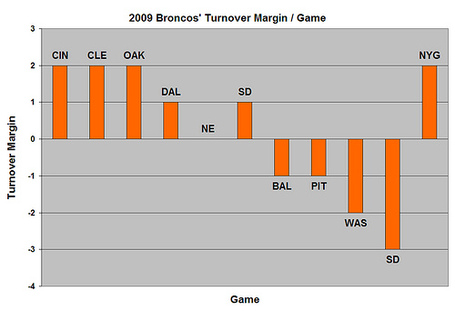 As always, I point out that I "normalized" the New England game to take away the Hail Mary interception.

Quick, go grab the dork in your office or dorm or cell (for fans of the Raiders) that knows nothing about football and show them this graph.  Tell them that a positive margin is a good thing.  Then ask them how many of these games they think the Broncos might have won.  They will certainly guess six, at a minimum.  And they'll wonder if New England was a tie. If there's one thing we've learned about this year's Denver Broncos, it's that they are going to live and die by turnover margin.  While this is true of most teams,  Denver seems to be particularly suited to the influence of turnovers (more on this later).  In the case of the Giants game, if a team has a plus-2 turnover margin, they win 78% of the time.  It's little wonder Denver took Eli and Company to the woodshed.

Here is where the Broncos stack up against the rest of the league with respect to turnovers (giveways, but I hate this word more than the word "Cutler"), field position, time of possession, and 3rd-down efficiency: 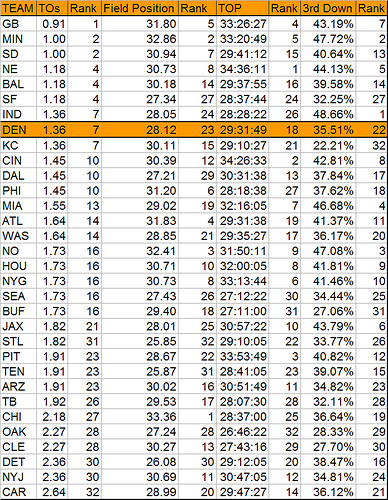 Denver has improved in most areas from last week, in which they were 10th in turnovers (giveaways), 27th in field position, 22nd in time of possession, and 21st in 3rd-down efficiency.

As the greatest poet of his generation (or at least his after party) Bret Michaels, once said, "Every rose has its thorn." 3rd-down efficiency is the thorn for Denver.  This is precisely one of the reasons the Broncos are a team that, unlike Indianapolis, can't overcome turnovers.  Notice that Indianapolis leads the league in 3rd-down efficiency.  It's this high percentage that allows them to overcome turnovers in the first half like they did against both New England and last week against Houston.  If the Broncos can't improve this percentage on 3rd downs, a minus-1 turnover margin could doom them (and I don't mean Dumervil).

This brings me to the New Orleans Saints.  Look at their rankings.  They are 16th in turnovers, 3rd in field position, 9th in time of possession, and third in 3rd-down efficiency.  How are they 11-0 with such a high turnover (giveaway) number/game?

It's because that are a clone of the Indianapolis Colts, only with better field position.  In the case of both Indianapolis and New Orleans, time of possession really is incidental to their yards/play average.  They are both quick-strike offenses (look for my Quick-Strike Index coming soon in another piece).   Their drives are generally quicker, take less plays, and are deadlier to the other team. So the fact that they commit a turnover (or two) early in the game is not as big a deal as it would be for another team (hello, Denver!).

Turnovers, as we have noted, are not all created equal.  A turnover committed early in the game is less valuable to the opponent than a turnover late (less time in the game means less options, obviously).  So as long as Peyton Manning and Drew Brees aren't throwing picks in the 3rd and 4th quarters (which they are not), their teams' ability to get down the field quickly can easily overcome these early turnovers.

Some of you might be quick to note that last week I said I believed Minnesota was a better team than New Orleans. I still feel this way.  Minnesota won't be at all intimidated by playing in a dome, and I really am inspired by Jared Allen's mullet. As far as the AFC goes, it's time that I accept the fate that is the Indianapolis Colts.

This weekly piece wouldn't be complete without again pointing out the Bears' ranking of field position. This week they rank 1st.  Imagine what damage they could be doing if Jay Cutler's arm wasn't such a wishbone. 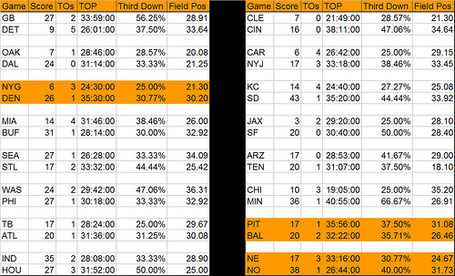 There were several games worth mentioning, but let's start with Denver's.  We've already noted the turnover margin, but it's also important to talk about field position.  Remember, field position is fluid, so as the ball is advanced up the field, the expected points value changes.  Denver essentially kept the Giants on their side of the field for most of the game.  The Giants only entered Denver territory three times in the entire game and one was on the last drive when the game was essentially over.  Mitch Berger and Matt Prater both had their best games of the season.  All of this kept the Giants on their side of the field where the expected point values were much much lower (for those that are looking for an in-depth analysis of the fluidity and point expectation of field position, it's coming).  This certainly contributed to Denver's victory.

Another game was Pittsburgh vs. Baltimore, but only because the stats lied again.  Pittsburgh won all four categories, but Baltimore escaped with the victory in overtime.  This is again a lesson in the context of turnovers. The later a turnover happens in a game, the more valuable (or damaging) it is.  Again, a turnover in the first quarter can be overcome, especially with a quick-strike offense.  However, in this case, the interception that Pittsburgh threw as they were entering Baltimore territory was in overtime (as late as you can get), and thus, the key to this game.   Just how much was that turnover worth?  Stats guys will tell you a turnover, no matter where it's committed, is worth 4 points.  Given Pittsburgh's season at this point, one could argue from the heart that it was worth a lot more.

The final game of note was the Monday night affair between New Orleans and New England.  First, New Orleans coach Sean Payton thinks so much of the 3rd-down efficiency stat that he decided to shove the stat for this in Suzy Kolber's face at halftime.   As a stats guy, I think it's cute.  Beats Joe Namath.  Second, on the Patroit's second drive, they were seizing momentum until Brady threw the interception.  From that point forward, things seemed to snowball on New England.  The impact of turnovers on momentum can't be overstated.  Third, on New Orleans' touchdowns, they had drives of 59, 75, 76, 74, and 75 yards.  They averaged only 5 plays/per drive on these drives, and finally, their average yards/play was 14.36.  In other words, the Saints can get the ball down the field in a BIG hurry.  Talk about a quick-strike offense.

Looking ahead to Kansas City, here is how the two teams stack up in the four statistical categories (keeping in mind these are averages/game):

I'm downright giddy to watch Denver's defense destroy Kansas City on 3rd downs.  Despite the fact that Kansas City generally doesn't turn the ball over, they also can't sustain drives.  And unlike the Colts or Saints, they don't have the quick-strike ability to avoid 3rd downs.  If Denver's 3rd-down defense holds true, they should be in excellent shape. As always, Denver must avoid turnovers.

What about playing in December in Kansas City?  Is it the early gamet ime?  The humidity?  The crazy fans?   I don't know.  But Brian Dawkins is immune to it.   And Josh McDaniels hasn't heard about it.  And most important, the fans are probably still napping off their Thanksgiving, wishing Marty Schottenheimer had never left.  Lucky for Bronco fans, he did.  Playing against his teams was always tough.