Pour Some Sugar on Me--What Happens When the Colts Lose

Share All sharing options for: Pour Some Sugar on Me--What Happens When the Colts Lose

The Broncos are like a bomb, baby, come and get it on.

What happens if the Broncos actually pull a miracle and beat the Colts tomorrow?  How will they have done it?  Is it actually possible?

Not only is it possible, I can already tell you what the game will look like.  As the lead singer for the band Def Depard (one of the finest poets of his generation) would say,"Red light, yellow light, green-a-light go."

Since 2005, the Indianapolis Colts have finished 55-16, including the playoffs and Super Bowl season of 2006. That means the Colts have won 77% of their games.   That's an insane number of wins in a 4-year stretch.   If it helps you bend your mind around just how good this is, just imagine the Raiders losing percentage over the last 4 years and think about the exact opposite.  The Colts have been as good as the Raiders have been useless.

Perhaps you'd like a Christmas analogy instead.  It is the season, after all.  The Colts are the guy at the company Christmas party who took the time to get everyone a give.  He's classy and he's a winner.  The Raiders are the guy who downed too much eggnog, got completely slobber-knocked, complains about not getting a raise, and hit-on everyone's girlfriend.

But we're not here to celebrate the ineptitude that is the Oakland Raiders (for that, every day is X-Mas).  We are here to tell you what it looks like when the Colts are themselves inept.  Of the Colts' 16 losses over this timespan, two occurred when they were resting their starters.  So in reality, we have 14 legitimate losses during this time. This is enough to help us get an understanding of how to beat them.

I looked at all 14 of these losses from a statistical point of view, and, after averaging all of these games, generated what I believe is a solid statistical profile for what happens when the Colts fall.  Quite frankly, I didn't need 14 games to do it.  After about 5 games, the pattern became quite clear.  However, I wanted to go all the way back to 2005 in order to at least get a reasonable sample size.  I didn't want to waste time focusing on sample size.  I simply wanted you to see just how teams, on those rare occasions when it happens, beat the Indianapolis Colts.  Also, I have always wanted to say the phrase BC (Before Cutler).

First, you may be interested in knowing the dates and scores of the 14 games for reference purposes:

Before we get into the statistical profile, you might notice a few interesting things from the list alone.  First, as a non-divisional opponent, the Chargers have done rather well against the Colts over the last 4 years.  Others have pointed out that the ability of the 3-4 defense to disguise zone blitzes has given Manning fits against the Chargers. While teams have beaten Manning with the 4-3 as well, it can't be denied that the Chargers have had very good success with him using the 3-4 (and to a certain extent earlier in Manning's career, the Patriots).

Remember, this profile is an average of the 14 games since 2005 that the Colts have lost.  However, I'm confident that it yields some trends that are undeniable if you want to beat Peyton Manning.  Here is what an average Colts' loss looks like: 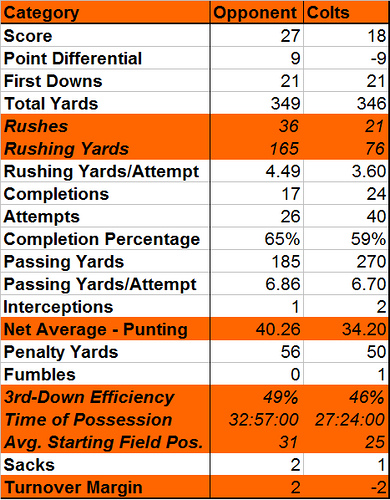 Now, we don't need to get carried away and automatically assume that the Denver Broncos must hit all of these numbers in order to win.  We are talking, again, about an average profile of their 14 losses.  And, it should be noted, that some of these numbers are rounded up or down.  For instance, the sack numbers are actually 1.60 and 1.00. But getting 1.60 sacks in a game isn't possible, so one rounds up or down accordingly.

Now that the fine print is out of the way, what does this profile tell us about what the Broncos must do tomorrow to beat Peyton Manning?  I've highlighted some key stats in predominately orange.  Much will be what you would have expected, but now you'll have the numbers to back it up.

How to Beat Manning

What is important?  Here now are the 5 keys to beating Manning, Def Leppard style:

1) From My Head, My Head, To My Feet.  Denver must run.  Then they must run.  And when they are done running, they should run some more.  For those of you that would like to see Kyle Orton shoot it out with Manning, you are going to be disappointed.  For the Broncos to win tomorrow, they need to obliterate the Colts in the running game. In the 14 losses that I profiled, the Colts' opponents have averaged 36 rushing attempts and 165 yards on the ground/game.  This contrasts to the Colts' numbers of 21 rushing attempts and 76 yards.  This is a rushing differential of 89 yards.

Normally, the time of possession statistic is skewed to the team that is winning in the 2nd half and is trying to kill the clock at the end of the game.  It goes against the traditional wisdom of establishing the run, dominating time of possession, and winning the game.  Many others, including the Football Insiders, have busted this myth, and in fact, have maintained the opposite, that in today's NFL, teams use the pass to set up the run.  However, in these 14 losses, the conventional wisdom is actually true for once.  Most of these 14 games were in question up to the final quarter.  Teams were not running the ball with big leads in the 2nd half in order to kill the clock.   They were running the ball to keep Manning's butt off the field and establish the run.  This is clear from the time of possession statistic, which is 1.2 to 1 in favor of the Colts' opponents.

2) Livin' Like a Lover with a Radar Phone.  The Broncos need Kyle Orton to have a radar arm on Sunday.  They absolutely must--and I mean must--get over 45%--on 3rd-down conversions.  Currently, they are around 35%. When the Colts lose, they lose the 3rd-down battle, and generally, their opponents are above 45%.  If Denver can't do this, they obviously won't sustain drives and they will be opening the door to Manning's quick-strike offense.

3) You Got the Peaches, I Got the Cream.  Mitch Berger--yes, that guy--and Eddie Royal are key in this this game. Why? Field Position.  Notice the differences in Average Net Punting Average and Average Starting Field Position for the Colts in these 14 losses.   The punting statistic was most surprising to me of all the statistics that I studied in these games.  The punting differential is a full 6 yards!   This may not seem like a lot, but it really is.

Manning can score from anywhere on the field.  There's no reason to hasten this through bad punting, bad coverage, and a field in which the Broncos are starting drives from inside their own 20-yard line.  Currently, the Broncos start drives (on average) from their own 28-yard line.  From the data above, everyone would agree this number needs to rise faster than Tom Cable's temper in a coaches-only meeting.

4) I'm Hot, Sticky Sweet.  The average turnover margin (rounded) in the Colts' 14 losses has been -2.  This means Denver needs to pick up fumbles when they hit the ground, and when Manning throws an errant pass, Denver needs to have hands like Lester Hayes (and people say I don't love the Raiders).   As with any NFL game, turnovers have a massive influence in who wins games.  For those of you that are missing some correlation coefficients, the correlation between team wins and turnover margin over the last ten years is .62.  That's not a one-hit wonder with make-up and hair spray.

5) Lookin' Like a Tramp, Like a Video Vamp.  Elvis Dumervil (and Co.)  needs to be completely filthy in this game. He needs to make Lita Ford look like a church girl.  In the Colts' 14 losses, their opponents have doubled them in the sack total (rounded).  While getting 2 sacks would be nice, Denver also needs to pressure, hurry, and disrupt Manning all day.  The Colts don't give up many sacks (less than 1 per game on average), but if there is ever a time for Elvis to show us he is "The King," it' s now.

The five keys to winning this game are not novel.  In fact, many pundits and fans have been screaming for a pound-the-rock, control-the-clock, turnover-laden frenzy tomorrow.   The statistics back all of this up.  Mitch Berger (and let's not forget Prater) was a pleasant surprise, however.  It reinforces why Josh McDaniels brought him in.

And I know how much Peyton Manning likes idiot kickers influencing the outcomes of football games.