Share All sharing options for: The Dude Abides...The Stats That Don't Lie, Week 14

"What did you say, Stats Champion? I'll beat you like a dog, a dog, you fool!" --Clubber Lang

I pity the fool that believes in league parity.

Let's be honest.  Outside of a few games, Week 14 was a complete bore.   The winning teams won by an average of 15 points.  While the storyline of the two undefeated teams continued to be compelling, most of the games were as forgettable as a JaMarcus Russell seam pass or a Jay Cutler trip to the red zone.  Roger Goodell should have donated some of his TV revenues back to charity.  At least fans would have felt better about the six hours of their lives they won't be getting back.

However, we did learn something about the Denver Broncos.  They stand more than a puncher's chance in the playoffs.

Welcome to another round of The Stats That Don't Lie, your statistical Mister T.  These are the stats that hit below the belt. They are the stats that never have to go to the judges.   In short, they beat you like a dog, fool.  As always they are Turnovers, Field Position, Time of Possession, and 3rd-Down Efficiency.

We first begin with my favorite visual of the Broncos season - turnover margin.  This time, I restricted the visual to the games since the bye week.  Honestly, cramming 13 weeks of data was getting tough. 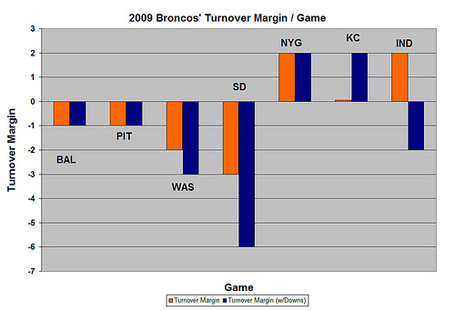 It's worth repeating what I wrote last week in looking at the two stats side by side:

...stats geeks have argued for decades that turnovers on downs should be included in the turnover statistics.  The thinking is that no matter the method of turning the ball over (fumble, interception, or downs), it still has the same basic result:  the drive is dead. Clearly, there is a higher value in an interception or fumble because of the inherent possibility of a score, but a turnover on downs stops your drive just the same.

Applying this to the Indianapolis-Denver game, one immediately notices that the recorded turnover margin is, well, a missed uppercut.  The box score shows that Denver won the turnover margin battle by two.  But in reality, Denver turned the ball over on downs on three drives during the game and also missed a field goal.  So that swings Denver's positive turnover margin to the negative.  Many have commented about the concern over the play-calling on 4th down.  These "real" turnover numbers lend credence to this view.  Not converting these 4th downs (and the 3rd downs that preceded them) on short yardage killed Denver in this game, so much so that it was the equivalent of losing the turnover battle.   And, unlike Indianapolis or New Orleans, Denver is a team that needs to win the turnover battle.

To this game (and in particular, 3rd downs) we shall return again, but let's get to our team rankings.

Here's where the Broncos stack up against the rest of the league after Week 14.  As always, remember these are averages/game (in my mind a better measure than aggregate numbers): 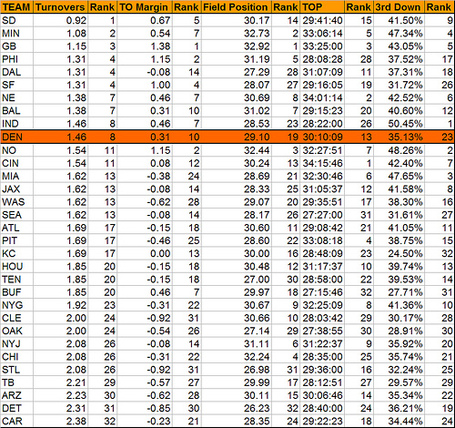 I'm not letting the Broncos off the hook on 3rd downs, where they rank 23rd in the league.  This is just an atrocious stat given that teams like the Detroit Lions are more effective.  If for some reason the Broncos don't make the playoffs, we can all point to 3rd downs as the reason why.  While I'll leave others to speculate on the tactical reasons for this (bad play calling, a weak offensive line,  Moreno's cuts and reads), it's outrageous that an 8-5 team is hovering at around 35% on 3rd downs--the Kool-Aid has gone just a tad bitter.

If you doubt the power of 3rd downs (or my power of cherry picking stats to make my case), then simply take a quick peek at which two teams are #1 and #2 in this statistic.  My oh my, it happens to be the two teams who are 13-0.

Speaking of the Saints and Colts, everyone in the mainstream media continues their enchantment with these teams going undefeated. They very well may do so, but historically, they are not as good as teams from the past have been. As it currently stands, New Orleans has a points/points against ratio of 1.70.  Indy's is 1.65.  Historically, over the last 25 years, this would put these teams between 13-14 wins.  The 1985 Bears hold the record for the largest points/points against ratio at 2.03. And they still lost a game.   Count me with the dwindling crowd of naysayers.

In case you were wondering, the Broncos' ratio is currently 1.11, which projects them at 10 wins.  And strangely enough, 10 wins coincides with Kyle Orton's historical winning percentage.  Given Denver's schedule this year (its opponents currently hold an overall record of 91-78), 10 wins would be a good accomplishment.

Other positives for the Broncos?  Their field position is getting better, they (generally) continue to be smart with the football, and one of their receivers is doing his best impersonation of Ivan Drago.  He will break you.

I once again included average-turnover-margin per game in these stats.  This is because I can't resist piling on Tony Romo and the Cowboys.  While they are tied for 4th in giveaways, they are 14th in turnover margin, and actually have a net-negative-turnover margin/game.   Romo can volunteer for holding duties all he wants, but he might want to tell his defense to force some turnovers, first.

Turnover margin also begs me to ask the question, "If the season ended today, who would you rather play, New England or Cincinnati?"  The Broncos have beaten both, and it looks like they will be on the road against one of these teams.   From the rankings above, give me the Bengals.  They are slightly worse on 3rd downs and give up the ball slightly more than the Patriots.  But their average turnover margin/game is barely positive.  This tells me they can be beaten.  And if the Broncos are like the rest of us, I am sure they want to prove that Week 1 was no fluke.

Did I mention that Brady and Belichick scare the hell out of me in the playoffs?

The I-can't-believe-you-creeped-up-on-me award should certainly go to the Packers.  Their rankings in each of the categories is top ten. Their average-turnover-margin per game is a whopping 1.38, which is much higher than that of New Orleans.   Although they have a tougher schedule in the next three weeks than the Vikings, they are peaking at the right time.  If the season were only a few games longer, the Vikings could have had real problems. Expect those problems, however, to begin in the playoffs with whoever the Packers match up against.

For those that are already looking past the Raiders (like me), and are wondering how Philly is stacking up, it's clear that game will be incredibly difficult for the Broncos.  The Eagles can score points (as witnessed this week against the Giants), but more importantly, their average turnover margin/game is a stellar 1.15.  DeSean Jackson has also allowed them to rank 5th in field position, beginning on average at the 31.19-yard line.

Last week, I stated that I didn't think Jacksonville was playoff material because their average turnover margin/game was negative and their points differential was -48.  After this week, that number climbed to -52.  Look for them to be overtaken by either Baltimore or even Miami (if they get past Tennessee this week).

Lastly, I've never been accused of being self-actualized, so I continue to get my jollies off of blasting Jay Cutler.  This week is no different.   Although the Bears have slipped slightly in their field-position rankings, I continue to ask myself how good they could be if Jay Cutler's name was Kyle Orton.  Oh, and if Jay's right arm wasn't a drinking fountain for interceptions. 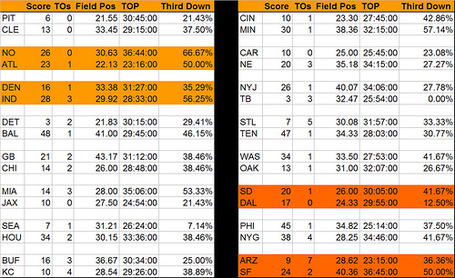 There isn't a lot more to be said about the Broncos game in addition to the turnovers, so I'll just point out a few things.  First, Indy was again over 50% on 3rd downs for the game, while Denver hovered around its season average of 35%.  We all knew that they needed to beat the Colts in this category to stand a chance.  Second, time of possession had little value in the game.  As the Broncos witnessed during the 1st quarter, it didn't take Manning long to score.  In fact, on the three quick touchdowns that put Denver in the hole 21-0, the Colts' average drive lasted about 4:27 and their average yards per play was 6.7.  For the Colts, a drive that lasts over 4 minutes is an eternity.  For the rest of the league, it seems rather hasty.   Lastly, even though Denver did a good job with overall field position during the game, their average starting field position on kickoffs was the 18-yard line.  I am begging Josh McDaniels to let Eddie Royal become a slot receiver, not a kick returner.

A few other games of note:  First, New Orleans-Atlanta.  Yes, Sean Payton's fake-field-goal call was a bit strange.  But if the Saints don't go 8-of-12 on 3rd downs, they don't win this game.   Both teams only had 8 total drives for the entire game (compare this to 13 in the Denver-Indy game).  Drives were at a premium - which meant, so were 3rd downs.  Going 66% on 3rd downs was absolutely critical - even more important given that Atlanta was 50%.  If only this kind of efficiency could rub off on Denver.

I wanted to highlight San Diego-Dallas also.  I hate Philip Rivers.  I absolutely hate the guy.   But Kyle Orton would do well to study how he shuffles in the pocket.  While Peyton Manning is the king of shuffling in the pocket, Rivers isn't far behind. Also, statistically, Dallas, you can't go 13% on 3rd downs (Kansas City territory) while your opponent goes 42% and expect to win an NFL game.

As an amusement, I highlight the Arizona-San Francisco game. I was really hoping that Arizona would come back in this game after committing 5 turnovers in the first half.  In the last two years, I've been wanting to analyze an NFL game in which the turnover margin was -5, and yet a team managed to win.  But the pesky turnovers kept giving the 49ers a short field, and even an Alex Smith-led team can win this type of game.  So I'll continue my sorrowful wait.

Looking ahead to Oakland, here is how the two teams stack up in the four statistical categories (keeping in mind these are averages/game):

Do I even need to say any more?  If Denver loses this game - especially at home - they really have about as much business being in the playoffs as John Clayton has being at a Sturgis bike rally.  Oakland is dead meat.

Denver should dominate this team and TKO them by the 2nd quarter.  The last game was 23-3, and I would consider this close.  There is absolutely no reason why Denver shouldn't send Al's boys home to contemplate Tom Cable's imminent firing and another top-5 draft pick.   This week's prediction for Oakland:  pain!  I pity the fool that thinks otherwise.