The Denver Broncos on Wednesday signed fourth-year tackle D’Anthony Batiste to their practice squad, it was announced.

Batiste (6-foot-4, 314 pounds) is a tackle who has played in 12 games (4 starts), including eight outings (0 starts) this season with Washington. Batiste started the 2009 season with the Redskins and was inactive for the first four games before replacing Chris Samuels in the team’s game at Carolina during Week 5. He saw action in the next seven contests before being waived on Dec. 15.

Batiste, who entered the NFL in 2006 as a college free agent with Dallas, joined Carolina’s active roster as a rookie after starting the season on the Cowboys’ practice squad. He was waived at the start of the 2007 season by the Panthers but was claimed by Atlanta and declared inactive for the Falcons’ first 10 games before making his professional debut against Indianapolis on Nov. 22 as a starter. He remained in the starting lineup for the next three games before being declared inactive for the final two games that season.

Batiste was waived at the end of Atlanta’s 2008 training camp before joining Washington’s active roster on Dec. 10, 2008.

A four-year letterman at Louisiana-Lafayette, Batiste was selected as a second-team All-Sun Belt Conference performer as a senior. He started his collegiate career as a tight end before switching to guard during his freshman season.

Batiste attended Marksville High School in Marksville, La., where he helped lead the team to three consecutive playoff appearances from 1996–98. He was named all-state, all-district, all-parish and all-region during high school career. D’Anthony Batiste was born on March 29, 1982. 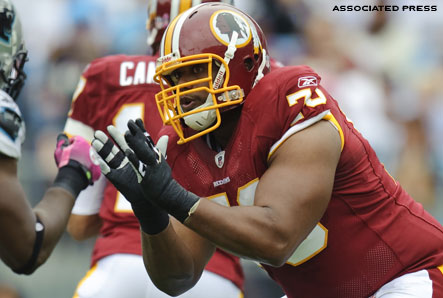 From a lengthy feature about Batisteon the Washington Post:

Around the academy office in Lafayette, they still talk often about Batiste, whom they call "D" or "Big D." They'd never produced an officer quite like him. For starters, none of the others was as big; few as menacing, fewer as promising. And certainly none left the Lafayette Parish Sheriff's Office for the NFL.