A Christmas Story--Beating the Philadelphia Eagles

Share All sharing options for: A Christmas Story--Beating the Philadelphia Eagles

I triple-dog dare ya to beat the Philadelphia Eagles!

Like putting your tongue to a flagpole in winter, beating the Philadelphia Eagles could get real sticky indeed.

But it's feasible.   And if it happens--barring a meltdown against the Chiefs--Denver will be staring its first playoff berth in the face since 2005, when another quarterback with a penchant for neck beards (and handball) took the Broncos all the way to the AFC Championship Game.

How can the Broncos beat the Eagles?  Others have speculated about specific strategies, and I leave them to their work. However, the numbers speak for themselves.  As I did two weeks ago with the Colts, I constructed a "typical" profile of what the stat sheet looks like when the Eagles lose.  For reference purposes, I used the four losses from the current 2009 season:

When I built the Colts' profile, I used a sample size of 14 games over a 4-year period.  This was primarily due to the fact that the Colts hadn't changed much in that time period.   One can't say the same about this year's Eagles and their group of young receivers.  So what one would gain with a larger sample size could easily be dismissed as extraneous to the current Eagles team.  Thus, I decided to include only the four losses from this year in order to build a profile.  Although it's a smaller sample size, it's still very instructive.

The truth is that one only needs to look at a four-game sample to understand how to beat the Eagles.   In much the same way one beats the Colts, the trick is to run the football.  But let's not get too far ahead of ourselves.  Let's take a look at what the stat sheet would look like tomorrow: 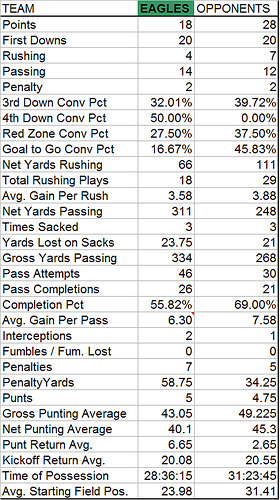 What lessons can we learn from this stat sheet?  There are many, but five is a manageable number for you to get through after a few days with your in-laws:

1) Stick to the ground or you'll shoot your eye out, kid.

Just like the Colts, the team that beats the Eagles beats them with the running game.  In the fours losses by the Eagles, their opponent easily averaged 100 yards a game.  And not because they got out to a big led and killed the clock in the 2nd half.  The Eagles were in each of their games through the 4th quarter.  Their opponents were simply running the ball effectively.   If the Broncos want to win, look for them to get into the 25-35-carry range. And hit the 110-yard mark.  This game will not be won or lost by Kyle Orton (although he can help), even if the Broncos somehow manage to pass first and run second.   It will be determined by the offensive line and Daniel Graham's blocking.

2)  This is your trough, Denver.  Show me how all of the little piggies eat.

This won't come as a surprise.  When the Eagles lose, they lose the turnover battle--specifically, the interception battle by a 2 to 1 margin.  Denver needs to get greedier than a bunch of rabid...pigs.  There has been a lot of talk about Brian Westbrook's return this week and how Philadelphia will suddenly want to run the ball.  Don't believe it. Philadelphia is a passing team. They are 11th in the league with 482 passing attempts, and in their four losses, they have put the ball up on average 46 times.  That's not going to suddenly change.

Speaking of screaming, last week I was screaming for more blitzes by the Broncos against the Raiders.   This week, Mike Nolan won't disappoint.  If he saw the Oakland tape (which he most assuredly has), he saw a team that blitzed McNabb on virtually every passing down.  In their four losses, the Eagles were sacked 3 times per game. Elvis needs to get his butt in the building--then tear it down to the ground.

DeSean Jackson is getting more publicity this week than Brett Favre (well, perhaps it just seems so).  But when the Eagles lose, they lose the battle of field position--by a full 7 yards.  Moreover, the net average by their opponent's punter is over 5 yards greater.  Lastly, their average kick-off return is even.  Translation: Denver needs to get the most out of their special teams and serve up some meatloaf to DeSean Jackson in the return game. By halftime, we should have a decent idea as to how well the field position battle is shaping up, and furthermore, how it bodes for the Broncos.  Hopefully, McKinley will electrify the Broncos with his own return antics.

4) Jealous of WHAT? That is... the ugliest lamp I have ever seen in my entire LIFE!

The Eagles are not lighting it up on 3rd downs in general this year at 37.90%.  This bodes very well for Denver's pass defense.  In their four losses, the Eagles have looked even worse, at 32.01%, while their opponents have converted (on average per game) 39.72% of the time.   This is also doable for Denver's offense, which has been averaging almost 35% over 15 week.  Given Philadelphia's propensity for blitzing, look for a lot of quick slants by Denver.

The Broncos need to be the bully in this game and send the Eagles whining away from the red zone.  In perhaps the most telling stat from the four Eagles' losses, they are 27.50% in the red zone and only 16.67% in goal-to-go-conversion percentage.  This was particularly pronounced in their defeats to the Cowboys and Raiders, and it becomes even more magnified given Denver's failures in the red zone on both sides of the ball a week ago.  Make the Eagles kick field goals and Denver wins this game.

It sounds easy, doesn't it?   Create a few turnovers, run the ball about 30 times in the game, hold tough in the red zone,  convert just 2-3 more 3rd downs than normal, and beat the Eagles in field position.

So easy in fact, a Raider could do it (and did).  And the Raiders always put their own eyes out.  Just look at their logo.

See anything in the stat sheet that stands out for you?