Share All sharing options for: The Greatest Broncos of All Time....By The Numbers -- #5

Well, so much for any discussion.  A bit of a quandary, thought Prater's prolonged slump to end 2008 helped make my decision for me.  No one really deserves this, but the fact that Daluiso enjoyed a prolonged career and got to play in a couple Super Bowls gives him the edge.  Of course, I have to have the required pic of Big Brad -- 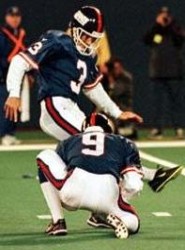 Daluiso had already been on no fewer than 4 NFL rosters(Packers, Falcons, Bills and Cowboys) before Dan Reeves brought him to Denver to be the kick-off specialist.  That experiment lasted only one season as Reeves was sent packing after the 1992 season.  Daluiso went East with Reeves, joining the coach in New York with the Giants.  Fortunately for Brad, his career in NY lasted longer than the coach.

After heading to New York, Daluiso wore #3, and ended up having a decent career by NFL standards, playing 8 seasons for the Giants.

Brad Daluiso retired in 2000 as the Giants all-time most accurate kicker, and is the 2nd all-time leading scorer in the team’s history.  In addition, he was a four time NFC Player of the Week, 1994 Special Teams Player of the Year and three year Team Captain (1997-1999).  Brad played in Super Bowl XXVI with the Buffalo Bills and Super Bowl XXXV with the New York Giants.  In 2003, Brad was recognized as one of the ten most revolutionary special team’s players in the history of professional football (The Star Ledger. September 10, 2003).

Up next, the thrills continue with #6!