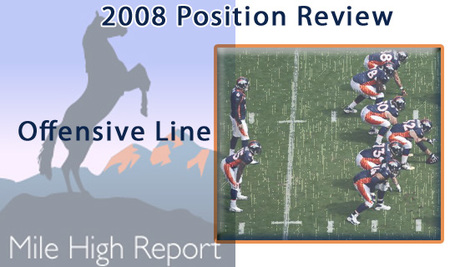 Entering the 2008 re-loading season, I was pretty down on our offensive line, as you can see here and here.  The 2007 season saw the worst performance by the group since Mike Shanahan had become Head Coach in 1995.  Particularly in pass protection, the performance was just atrocious, especially over the last 4 games of the season.  It is fair to say that i considered the deficiency to be no less profound than the deficiency we see on defense heading into this re-loading season.  The starting five at the end of 2007 was a pretty motley bunch:  Matt Lepsis, Chris Kuper, Chris Myers, Montrae Holland, and Erik Pears.

Well, what a difference a year makes.  First of all, the Broncos got it absolutely right with the selection of Ryan Clady.  (So did I, incidentally, and my second-favorite guy, Jeff Otah was terrific for the Panthers, also.)  Clady was so good, that it's difficult to do it justice.  For such a young guy, he played as well as any Tackle I have seen since Tony Boselli, in his healthy prime in Jacksonville.    I've covered him separately, but he was absolutely suberb.  He replaced Lepsis, who had some good years for the Broncos, but was awful in 2007, before retiring.

The other revelation was Ryan Harris on the right side.  I had it totally wrong with him, because I listened to what I heard, instead of watching what I saw.  Of course, he didn't play on offense as a rookie, so there was nothing to watch.  In any case, he was outstanding as a first-year starter at RT, and was absolutely the best pass-protector in the NFL at that position.  He doesn't blow people off the ball like Otah and some other huge RTs, but he's more than solid in the run game also.  Peter King even named Harris to the SI.com All-Pro Team (admittedly, because Mike Shanahan told him that Ryan was really good.)  He was an enormous upgrade over Pears, who is not an NFL starting player.

At Left Guard, the cautiously optimistic plan was to bring back Ben Hamilton, after he had missed a whole season with concussion symptoms.  That plan worked very well, as Ben got back to his old form and played well.  In my opinion, he had the weakest performance of the five Broncos linemen, but that doesn't make him weak.  He was the most expensive cap-wise, but he got paid appropriately for his performance.  The other 4 guys, who were all really cheap, just outshone him.

The Center, Casey Wiegmann, was almost flawless.  Replacing a Hall of Fame-caliber player (who almost certainly won't be enshrined) like Tom Nalen is a difficult thing to do, but Casey did it with aplomb.  The highlight of his season was the Jets game, in which he wore out a great player in Kris Jenkins; but he was good in every game.  He deserves a raise for this upcoming season after making his first Pro Bowl appearance.

The Right Guard, Chris Kuper, was fantastic also, in his second season as a starter and his first on the right side.  He's not too noteworthy in any way to look at, but he just gets his man blocked on every play.  He is one of the best guys in the League for absolutely maximizing his physical ability.

As for the subs, they almost never saw the field, which is a testament to the durability of this group.  I agree with Mike Lombardi when he says that the ability to stay healthy is a skill for an offensive lineman, and these guys have that skill.  Kory Lichtensteiger got a few snaps at RG toward the end of the year, when Kuper came off the field for a minor injury (but quickly returned).  Kory did contribute as a motion-TE in the short-yardage running game.  Tyler Polumbus played on special teams and acquitted himself very well.

After being terrible in 2007 (especially in pass-protection), this line was arguably the overall best in the NFL in 2008, and inarguably the best in pass protection.  We can only hope that this reloading season's trouble spot can be addressed so thoroughly, and lead to positive results so quickly.