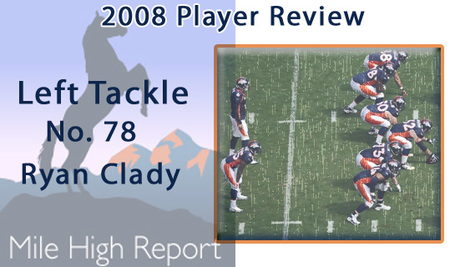 It would be difficult to overstate just how good Ryan Clady was in his rookie season.  I was trying to think of just how a person would go about doing so, and decided to float a bunch of test statements, and evaluate them for overstatement.

*  Ryan Clady was the best player in 2008 NFL Draft, and should have been Rookie of the Year, if people who knew anything about football voted for the award.

*  While we're at it, he was the best player in the AFC West, with apologies to Nnamdi Asomugha.

*  He was the best rookie offensive lineman I have ever seen.

I don't believe that any of those are overstatements.  Let's just take the first one.  Matt Ryan won ROY, and played very well for a rookie QB.  In several singular games, he made more mistakes than Ryan Clady made over the course of the entire season.  Most people would say that playing QB is more mentally challenging than playing LT, but the reality is that it's not as big a difference as most would think.  Playing on the offensive line is very mentally challenging, and Ryan never once looked confused.

I don't think you can name a player in the NFL who made less mistakes (mental or physical) than Ryan Clady in 2008.  That is a shocking statement to make about a rookie, but it's one which I hold to be true, nonetheless.  When a LT messes up, everybody can see it.  He's like a CB in that way, always alone, with the team always depending upon him.

In the mistakes scorecard, Ryan gave up half a sack (to Richard Seymour,) and got called for 3 penalties.  He was charged with one false start, one illegal formation (which is actually the fault of the player who had left him uncovered) and one highly-questionable down-field holding call, which cost the Broncos 2 yards in field position from the start of the previous play.

Ryan Clady has the agility of a man who is 100 pounds lighter than his listed weight of 325, which was understood when he was coming out of Boise State.  He's also stronger than the draftniks thought, and he plays with a commendable mean streak in the running game.  He's obviously smart, because he always takes care of his assignment.  Everything which was held against him as a perceived negative turned out to be a red herring.  Really, is there anything to complain about with the guy?

I think my favorite Broncos running play this season was anything around left tackle, where Brandon Marshall motioned in tight to the formation and hit the DE, while Ryan Clady got outside and led the running play.  It is a devastating play.  Ryan was second-team All-Pro, but that was a travesty.  It will be corrected this season, guaranteed.  His name is getting out there now, and it really started at the end of the season.

Ryan was a huge (and lonely) bright spot in the game against the Panthers, as he dominated Julius Peppers.  Randy Cross (typically a Broncos hater, but a former O-Lineman) was moved to suggest that the Panthers ought to give up on trying to beat Clady, and just move Peppers to the (defense's) left side.  Peppers is only one of the best DEs in the NFL.

In the final regular-season debacle against the Chargers, John Madden was moved to introduce a video highlight package by saying, "You want to see a really good player, take a look at this guy here, #78, Ryan Clady."  He had an almost Favre-like reverence to his voice as he said it, which is saying a lot.

It's pretty rare that the Broncos have gotten hold of a truly elite, once in a decade-talent.  I would put the number of them found in the last 25 years at four.  That would be John Elway, Jay Cutler, Champ Bailey, and Ryan Clady.*  Ryan has a tremendously bright future ahead of him, and we should all be very excited.  If you have a QB and  Left Tackle, you're cooking with gas on offense.  We now have the most talented guys in the League at both positions.  Our season ended in disappointing fashion, but the play of young Mr. Clady is something we can all be happy about.

* Please don't interject about other guys who were elite talents, as I'd like to keep this about Ryan Clady.  I acknowledge that Shannon Sharpe, Brandon Marshall, Tom Nalen, Jason Elam, Randy Gradishar, Terrell Davis, and some others were very talented, and all were Hall of Fame-caliber players.  It is my belief that the four guys I mentioned are one or more levels up from all of them in terms of pure talent.  Thanks for keeping this thread Clady-dedicated, and if you need to vent, maybe write a separate Fanpost about how I have this all wrong.