Well, since the Hall of SHAME has once again spat in the faces of all Broncoland, I have decided to resume my efforts to make the Ring of Fame the only honor of consequence that matters in the minds of all Broncomaniacs. I started this series near the end of the reloading seasons in 2008 and will continue profiling each Ring of Fame Class along with profiles for each Bronco great enshrined.

The Ring of Fame is the Bronco Hall of Fame. When Pat Bowlen took control of the organization, he set about to change the culture of disrespect in the NFL and his first big idea to change that culture was to institute a Ring of Fame to honor the great Broncos from years' past. I covered the inaugural Class of 1984 in my first post on the Ring of Fame and I will now pick up where I left off.

The Class of 1985 was one man and that man helped build this organization from a laughingstock to a championship contender. That man was Gerald H. Phipps and he would purchase the Denver Broncos in 1961 and would run the organization for the next twenty years. 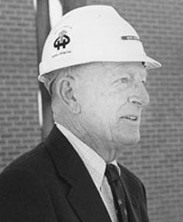 Gerald H. Phipps was born during World War I. He built the GH Phipps Construction Company into a successful business and set out to bring professional sports to his hometown of Denver, Colorado. His first step was to purchase the minor league baseball team, the Denver Bears, in 1947. He would own and operate that organization until 1984.

When professional football finally came to Denver in 1960, he and his brother Allen would set their sights on the hapless doormats of the American Football League. Phipps and his brother owned the Rocky Mountain Empire Sports, Inc which controlled the Denver Bears franchise and in 1961 the syndicate would buy out the controlling interest from Bob and Lee Howsam in 1961.

Under the Phipps' brothers ticket sales would increase from about 8000 in 1964 to almost 23,000 a year later, which effectively stopped a minority interest in the Broncos from selling the team to Atlanta that year. Broncomania was a product of the creative genius of Gerald Phipps and he would nurture and direct his organization from the bottom of the food chain to one of the most fear and respected football organizations in the National Football League. Every hiring and firing he ever made was done with the best interests of his team in mind. By 1981, the Denver Broncos were a valuable investment and after a couple of profit taking playboys attempted to buy and sell the team, Pat Bowlen came to town and returned stability to the Broncos organization. A stability we still enjoy to this day.

Gerry Phipps also served as chairman of the NFL Finance Committee for a dozen years from 1970-1981. He would get out of the sporting business in the early 80's and retired. He passed away on August 6, 1993 at the age of 78. He is the only non-player ever inducted into the Denver Bronco Ring of Fame.