Share All sharing options for: The Greatest Broncos of All Time....By The Numbers -- #6

Enough with the kickers and punters already! Even if one of the three listed above had spent more than a season each with the Broncos I would have excluded them on principle alone. With Baker, Nedney and Ralphie out of the way I was left with a tougher than expected decision. Of course, I am never one to sit on the fence and after thinking about it over a Coke Zero I came to a decision. 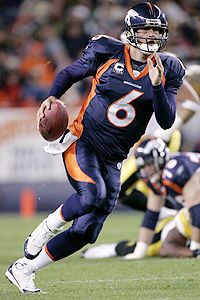 It really wasn't that tough, I mean, come on, Cutler is the future of the franchise and has already shown just how talented he can and will be. While the wins have come as fast and furious as we would like, Cutler hasn't been to blame, and his handling of the Jake Plummer situation, the Brandon Marshall incident and his medical situation shows why the QB was voted a Team Captain before the 2007 season.

While there is room for growth, both on and off the field for Cutler, you can see he has all the pieces of the puzzle to be great. Now it's just a matter of putting the pieces together to create a perennial All-Pro.

A quick note about the other #6, Bubby Brister. A journeyman QB at best, he did provide the Broncos a solid backup at a time when John Elway struggled to get on the field each and every week. During the 1998 season, Brister was forced into action in 5 games, starting 4. The Broncos won them all on their way to their 2nd straight Super Bowl title. In hindsight, I wonder if Shanny ever second-guesses his decision to skip Brister in favor of Brian Griese heading into the 1999 season.

A MHR Hattip to Brister for a couple years of solid service as the backup to a legend on a World Championship team. For me, Cutler has proven to be much more valuable, both now and in the future. He has only scratched the surface of what he can do and be. For that reason, what he has done and will ultimately do, Jay Cutler gets the nod as the Greatest #6 in Broncos history.