Share All sharing options for: Denver's Unique Running Back System

Many Broncos fans may be asking -

It’s a fair question. We can’t expect to know Josh McDaniels’ mind with certainty. He has promised us an offense different ‘from anything you’ve seen before’. I’d enjoy that. But we can look at several facts and actions, and have a fairly good idea of both what he has used and what certain coaches with the Broncos have done historically.

The new Broncos kept two of the top offensive weapons of the old Broncos – Bobby Turner and Rick Dennison. With Dennison keeping watch over the nasty and skilled blocking of Ryan Clady, Ben Hamilton, Casey Wiegmann, Chris Kuper and Ryan Harris, the Broncos' zone-blocking scheme is alive and well. With Turner teaching the running backs the one-cut system that created more 1,000 yard runners than any other team in the NFL over the past 14 years, the Broncos have some powerful options to offer Josh McDaniels’ ‘new thing’ offense.

Continued on the inside…

Let's address something: Over the past few months, nycbroncosfan has produced a couple of great articles on running backs (here and here). He looked at an overall analysis of the production of individual running backs by round drafted in one and looked at the romanticizing of the history of the Denver rushing attack in the other. They were great. Still, some points were just outside their scope.

For example, There is less of a team 'committee' approach as we go further back in time. a modern running back can be an essential part of the team's RB scheme by blocking, running good routes, adding to the return game or special teams and receiving, in addition to running the ball. That will change how skills, and the outcome of picks, are perceived over time. The Broncos are one such team, as is New England.

Steve O wrote an impassioned piece on RBs, and I respect his opinion. One thing that he and I agree on is that there are a lot of ways to build a team. However, there are specific reasons why the Broncos' needs, and the background of McDaniels regarding RBs, will change the way RBs are chosen and how they are used, despite the continuity implied by the retention of Turner and Dennison.

There is also no doubting the emotional surge that the fan-base will experience in cheering for a solid first-round primary back, and some of our members will understandably be hoping for one, but our free-agent moves show that is not for this year. There is hope in the future, though. 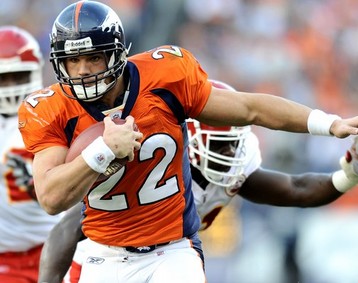 In my perspective, as well as nycbroncosfan's, Mike Shanahan overdid his approach to a very useful O line/RB system. He repeatedly ran 1,000-yard rushers, a valuable commodity, out of Denver. The Broncos had more 1,000-yard rushers over Shanahan's tenure than any other team in football, which is both good and bad. The good was that we had them - the bad was that we let them or made them leave.

Why did the Broncos have so many RBs do so well? Because the specific needs and benefits of the system are very effective and very different from the average team. The talents of Rick Dennison and Bobby Turner are scheme-specific - they use the skills of the Broncos' unique  ZB system on the O-Line and marry that to Turner's variation of the one-cut system. Used together, they maximize the potential of the RBs so that you can effectively use a runner from a later pick (but preferably not a very late pick) to gain excellent yardage. 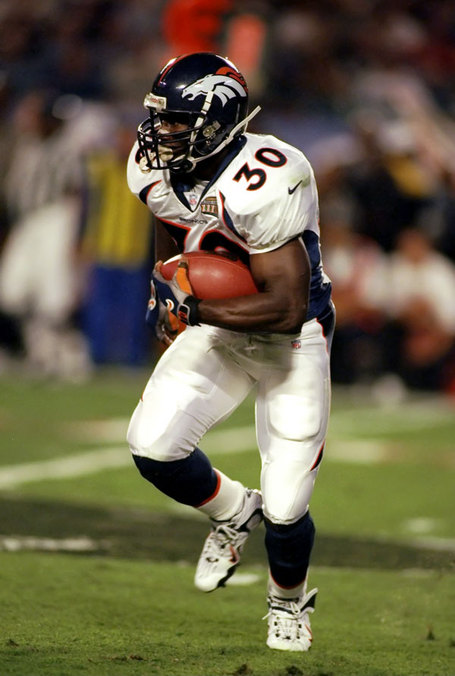 That is a great benefit from the standpoint of team-building, because you can, within reason, use certain higher picks on other needs. If you go to a committee system, which Denver did and which McD's history comes from (NE's was superior to Denver's in many respects over the past 4 years) you can improve your team stats even more by this system, although at the expense of individual stats.

I thought that Shanahan (who I admire greatly as a coach and OC, and I don't mean this to pile on him) made several errors, and we've talked about them on MHR. He liked players that no one else wanted, eventually making great use of very low picks and UFAs such as Young and Hall. That's probably fine, in degree, if he found healthy backs that met the system perfectly (which is rare), but Mike took it to extremes. I think that he was too liberal with his ideas regarding injury history. Several times, he ran very productive backs out of town on thin reasoning or on a few mistakes, refusing to work with backs if they developed ‘issues'. They seemed almost disposable. 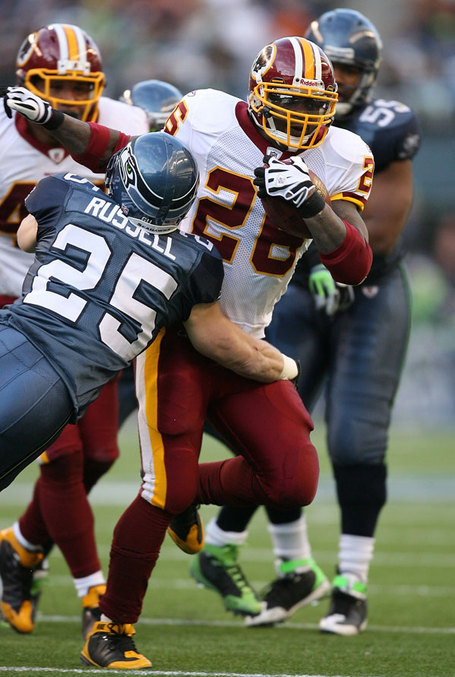 Historically, we know those things about Mike S. However, those things don't change the fact that given our retention of Turner and Dennison, we continue to see that finding a runner for a one-cut, zone-blocking  committee system is a completely different creature from drafting for other teams. The player needs to have all of these abilities:

What is important to Denver is not what round these players are found in, although it's fair to say that letting the picks fall too low decreases the chances of success in degree. It's all about whether or not their skillsets and mentality match the Broncos' very unique system's needs. If you accept that keeping Turner and Dennison suggests that the above will still matter, at least in great degree, then to add to our understanding let's add the next issue: What's McDaniels' background as far as the running game?

To summarize it, in the slightly different system that was run under McD for the past 4 years in NE, many key points are the same. Kevin Faulk got a lot of  attention last season,  but he only got 83 carries for 507 yards and 3 rushing TDs -  yet he was a 2nd-round pick of New England's in 1999. Their primary back was Sammie Morris (5th round, Buffalo, 2000) with 156 carries for 727 yards and 7 TDs.

In the movement to a modern committee approach, backs can be essential without compiling large numbers running the ball. They may be better at some combination of blocking, route running, returning and/or receiving. The real key for the Broncos in future drafting is recognizing exactly what kind of back Denver needs to fit its system and specific requirements. My money will always on be Bobby Turner to do that for us. I hope that his voice will be listened to. McDaniels will want many of those same qualities.

How high a draft pick we use on a RB needs to be matched against exactly what other needs we have. These factors together don't suggest the use of a 1st-round back at all at this time. While not a gambler myself, I'm comfortable betting that McD and Co. won't be shelling out a 1st on a RB until the team is much stronger, both on defense and depth-wise, such as on the O-Line. 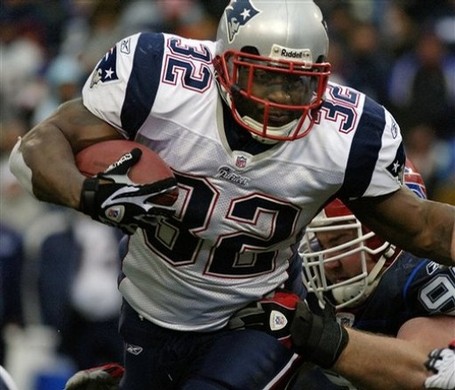 It says that McD's offense depended on no one specifically, and stayed with no single category of runner in terms of rounds  in the draft. The main back (Morris) was a 5th-rounder and Green-Ellis was undrafted. The other three backs on the ‘committee' were two  second rounders (Faulk and  Jordan) and a first. That first-rounder (Maroney) was only chosen after a long period of top team-production (and some nice rings), and he is still mostly warming the bench, although partly due to injuries.

NE was happy to use good, higher picks on RBs and I suspect that McD eventually will be - he probably, and rightfully, sees that he needs to build a defense and get ahead of the curve on depth and preparation for the future on offense before moving towards higher RB draft picks. But, eventually he will. Why?

Bobby Turner needs a very specific back.  They may be in the 1st round, or the 2nd, 5th or 7th. McD is about winning - he will go after whatever pick he needs. He will start by rebuilding the aspects of the team that he needs to change the offensive and defensive scheme, and clearly the defense needs a lot more help. But once they have the central pieces in place, they will get the RBs at whatever slot Turner finds them.

One thing the Patriots emphasized, McD echoed this year in free agency and it will mesh well with the current Broncos:  Catching the ball out of the backfield.  The five backs that the Broncos will probably go into camp with - Hillis, Torain, Jordan, Arrington and Buckhalter, in no order - are all talented at receiving. Arrington has more yards receiving (255 in 2008, in '07 it's 241) than he does rushing ('08 - 187, in '07 - 78) His return skills (923 last year) will be an added bonus. 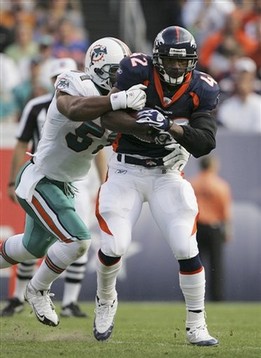 It would be jumping the gun to say that we can know with certainty how the new offense will use running backs. However, we do know a lot.

Combining the attributes of the Denver and New England systems describes for us a specific type of back in terms of skills and temperament ,who will most likely fit the needs of the new or ‘modern' Denver RB approach. Regardless of which round we find them in, fulfilling Bobby Turner's requirements as well as those of Josh McDaniels should soon give us a stable of productive backs that will be able to fulfill whatever game-plans that Josh can design, and OC Mike McCoy will oversee.