Tales from the SunnySide: Bear Pascoe

Share All sharing options for: Tales from the SunnySide: Bear Pascoe

Among the many things that conventional wisdom says that you can't coach, high on that list is toughness. It's an innate quality that some players have and some don't. Broncos fans love it, and point to such young players as Ryan Clady, Peyton Hillis and Wesley Woodyard as well as older ones such as instant favorite Casey Wiegmann.

You could make an argument that the toughest player in this year's draft is Fresno State TE Bear Pascoe. His given name is McKenna Sean Pascoe (son of Sean Pascoe, the former Colorado State linebacker), but his relatives insist that the nickname came as an infant when they noted his size and said that he "came out growling". He's now 6'5" and 260 pounds. As a ball player, Pascoe is said to lack subtlety. He lacks top-end speed. He doesn't care, either. He isn't interested in running away from linebackers and defensive backs. He prefers just running them over. Gifted with excellent hands, a nasty football demeanor and top skills as a blocker, McKenna Bear Pascoe is the total package for those who are looking for a tight end who's both ravenous and skilled. 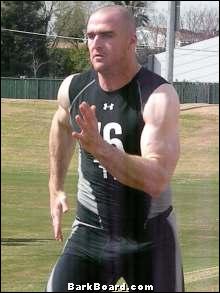 Need proof? Hillis earned a name for himself, in part, by dragging his pickup while in high school, needing a challenge and a better workout. Pascoe spends his offseasons as a rodeo cowboy, roping and wrestling calves. He arrives at those events in a diesel-powered pickup truck that he won in a roping competition at just 15 years of age. Too young to drive it home, he had to ask his sister to help him out. No one laughed.

In his honor, Walterfootball.com has proposed a new rule:

"New rule: If you have a guy named "Bear" on your team, you automatically win 10 games. No questions asked. The Bear was fourth on the Bulldogs with 22 catches and second with 307 receiving yards."

Bear lost some ground on the draft during the 2008 season when he was plagued by an ankle injury that wouldn't heal.  That didn't stop him from achieving All-American status and becoming a John Mackey Award Candidate in his senior year. He was also a returning first-team All-WAS player, the 1st in Fresno State history. He had a total of 85 catches for 953 yards and eight touchdowns over the past two seasons, and earned first-team All-WAC in 2007 and second-team honors in 2008.

If his expertise at roping (which he learned from his competitive-roper father at the tender age of 5) doesn't convince you of his athleticism, the fact that he came to the Bulldogs as a quarterback might. He has a tight physique, powerful and well-built even at 260 lbs (he recently weighted in at 250 and 253, so there is some variance). His upper arms and shoulders are long and massive. He is one of the strongest tight ends in the draft, a dominating blocker and would be an instant performer on special teams, where he blocked four kicks over his collegiate career (nfl.com lists six), two of them last season.

Michael Pierce did a scouting report on him:

Pascoe's aggressive attitude and overall strength are his big assets. He plays with a killer instinct when blocking, going after passes in traffic, or with the ball trying to run you over to pick more yards. Pascoe's hands are outstanding; he catches the ball strong away from the body which allows him to make tough catches in traffic and with bodies draped on him.

He understands the importance of running good routes and applies himself to studying getting even better. He brings his intellect and knowledge from his QB days to reading and overpowering the defense, and quickly reaching the second level to in the fervent hope that he will get to level some ‘backers. He does take about three steps to reach top speed. After that, he's very hard to stop. 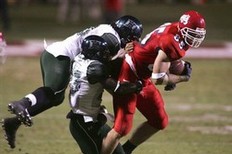 "Good frame for the position. Good bulk and overall strength as a blocker. Uses his hands and leverage well as a blocker and provides as much effort as a blocker as he does as a receiver. Puts smaller defenders on their back and plays through the whistle. Able to reach linebackers at the second level. Former quarterback who understands where the holes are on the defense. Solid route-running in the short to intermediate zones. Uses his body to shield defenders. Natural hands catcher who can who fight for the ball and can track over his shoulder. Bullish runner who fights for extra yardage."

As a talented receiver who can catch the ball in traffic, Pascoe has soft hands and a hard attitude. NFLdraftguys.com added,

"Once he secures the pass he immediately looks for a defender to punish, and he knows how to lower his shoulders and deliver a forearm blow.  Bear is a big target that can be a devastating blocker once his hands are in place."

"But," they added, "He's not incredibly athletic, and his aggressive play style can work against him when he's asked to block downfield."

It's an odd statement, because it's hard to say that a prize winning rodeo champion who was a star QB and is an All-American TE isn't athletic. It's understandable, though, because his natural athleticism didn't translate to good Combine numbers and Bear's draft stock took a hit. Pascoe said his goal was to run the 40-yard dash in the 4.7-second range, but that fell to 4.95 and 4.97. He improved his numbers on his recent Pro Day, though, and ran the 40 in 4.89 and 4.90, shaving off a tenth of a second. He also posted a 30.5-inch vertical, 9-foot, 4-inch broad jump, 4.52 short shuttle, 7.19 three-cone drill, and 14 bench-press reps. His long arms work well for shoving aside linebackers, but they doesn't translate well to the bench. If you doubt his power, though, just look at the film.

There are two sides to every coin, and Bear's natural aggresiveness can play against him. He can get out of position whie blocking in space, but that can be remedied by good coaching and the use of his natural football intelligence, which is considerable. He also played linebacker during HS, so he brings the awareness of three positions to the party. The film on him playing special teams brings immediate interest. He'll start there right away.

Speaking of film, he has two YouTubes that can be seen. In the first, he teaches you how to twirl a lariat. The second is of the infamous Mud Bowl highlights, which can be seen here. Bear just isn't your ordinary kind of guy.

Most have Pascoe dropping to the second day of the draft. He's been listed as high as 3rd among TEs, but usually lists out at about 9th. The more I watched and read, the more I thought that this is a triumph of the Combine over the skill level. While I understand, and generally agree that the Combine is a job interview and the tests are among the basic skills that a player should have in addition to his film, sometimes you see a man who is a football player.  You know that he's going to love NFL special teams and you know that he's going to start. It's far more a question of when and where than whether.

Bear Pascoe is one of those players. He will need to get stronger in the weight room and he should try to work on his speed. His routes are good for college, but will have to be great at the next level. Still, he plays faster than he times and you just can't teach the kind of toughness that he has: Bear Pascoe has toughness like an irritable grizzly with fleas and a bad rash in the springtime before he eats. He's hungry, he's seriously determined and you really don't want to be in his way. Walterfootball.com jibed,

If it takes until Day 2 of the draft, as most predict, some team is going to get a steal.  If Bear Pascoe goes to Chicago, they are going to give him the keys to the city.

This story was written by MHR request - thanks, styg! If you have a player, coach or topic that you feel would make a good Tales, please email Doc at mhrtales@gmail.com