Tales from the SunnySide: Andra Davis

Share All sharing options for: Tales from the SunnySide: Andra Davis

He attended Suwannee High School in Live Oak, FL He was an outstanding linebacker and fullback who garnered Super Prep All-America recognition as a linebacker. Andra was ranked among the nation's top 15 linebackers by that publication. He ranked among the top 12 players overall in the state of Florida. and among the Top 10 linebackers in the SEC region by Prep Star as a three-year starter: Second team all-state (4A) in 1995 and first team in 1996. He played in just seven games in 1996 due to injury, but still made 105 total tackles with 7 sacks, as well as rushing for 751 yards as a fullback. (4 TDs). A young natural leader, he was team captain for both his football and basketball team.

He became a Florida Gator, attending the University of Florida as a recreation program delivery major. He didn't see action his freshman year and was redshirted, but returned as a sophomore in 1998. Davis saw action in each of Florida's 11 regular season games. Over 301 plays, he made 11 tackles, 8 solo, with 2 TFL on defense. Andra also made 9 tackles for the special teams unit.

As a junior, the honors began to roll in. Andra was a starter at MLB, playing in all 12 games, with 11 starts (799 plays). He also played on special teams. He was named Florida's Outstanding Linebacker that year, recording 109 tackles, (74 solo) with 3 sacks for 25 yards, 12 TFL, 4 QB pressures, and 2 forced fumbles.

But he injured his knee the following year in the season opener and missed the rest of the year. Undaunted, Davis returned as a redshirt senior to win the honor of Most Inspirational Player and was named Associated Press and Football News' All-Southeastern Conference first-team selection as well as being a semifinalist for the Butkus Award, given yearly to the nation's top linebacker. He added second-team All-America honors from The Sporting News. Andra started every game at MLB, and led his team with 107 tackles (68 solo), 2 sacks for 14 yards, 10 TFL, 2 recovered fumbles, 1 forced fumble and 1 interception.

Andra Davis was selected by the Cleveland Browns in the fifth round of the 2002 draft (141st overall). After a quiet first year, it was in his second season that he began to really thrive. Andra started at the middle linebacker position during training camp and went on to lead the Browns with 136 tackles, including 90 solo. During the Kansas City game on 11/9 Davis started at MLB and led the club with 14 tackles, including 10 solo, 4 sacks for 20 yards, 1 FF. Those four sacks marked the first of his NFL career. Apparently, his speed could be adequate, when coupled with a ferocity belied by his natural calm demeanor. 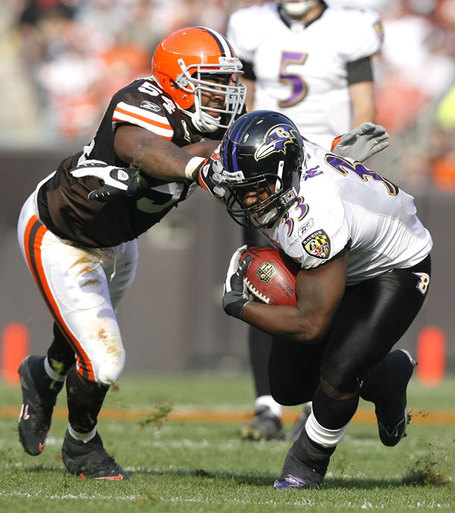 He finished his third NFL season (2004) with 71 tackles (53 solo, 18 asst. which ranked 3rd on the team), 0.5 sacks for 3.5 yards, 6 passes defensed and three interceptions for 35 yards despite missing the last 5 games of the year with another knee injury. 2005 brought him a 5-year contract extension. Far from letting up with his new contract, Andra started all 16 games at middle linebacker and recorded 149 tackles, including 89 solo, 4 pases defensed, 2 sacks for 22 yards, and 11 QB pressures, leading his team. He attained a career-high 20 tackles at Green Bay on Sept. 18 of that year and led or tied for the team lead in tackles in 13 games. Davis was the AFC Defensive Player of the Week with 14 tackles in a 22-0 shutout vs. Miami on Nov. 20.

In 2006 Andra started 14 games at middle linebacker and led the club with 104 tackles (79 solo), 4 TFL, 1 sack for 7 yards, and 2 interceptions for 19 yards. He added eight games with ten or more tackles before suffering a concussion on Dec. 17, forcing him to miss the final two regular season games. 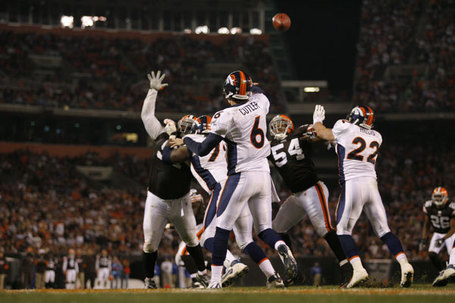 But his production declined in 2007. Hampered by an ankle injury, he started just 10 games and garnered only 67 tackles (51 solo) and 3 passes defensed. Davis did maintain his nose for the ball on passing downs. He improved to starting 16 games in 2008, making 90 tackles (62 solo) with another 3 passes defensed and added an interception. Whether scheme, pass rush or personal decline, the past two years haven't been the level of production that Davis was recently capable of, although he improved in 2008. ESPN said,

"Davis, who led the Browns in tackles in three of his last six seasons, recorded 90 in 2008. He's capable of racking up 100-plus tackles with the Broncos and still merits a look as an IDP."

There is an added point - Romeo Crennel said in September of 2008 that they were playing Davis in a rotation during because,

"...the club was "trying to keep Andra Davis fresh because he is playing on special teams more than he has in the past." That will explain some of the decline, but it's safe to say that Cleveland in the past two year hasn't had a killer LB corps.

If you want a brief glimpse into the character of the man, consider this:

In a surprising move, Andra Davis has accepted a substantial pay cut for this season and has learned that this will be his last in Cleveland.

Davis told reporters that he harbors no ill will about the decision, having grown up in poverty and realizing his good fortune regardless of these decisions. Davis has agreed to drop his base salary from 3 million to 1.67 million for 2008, also dropping two season off the five year deal originally signed in 2005. Last season was a rare slip for Davis, working as a perennial pro Bowl candidate before an ankle injury limited his productivity in 2007. H admits the decision to stay is out of loyalty (that) he hopes will be repaid if he performs this season.

I know personally it was my worst," said Davis, "But it's over, I learned from it and it could've been a blessing in disguise. This year, I have a chance to go back and erase last season, so I'm happy and I'm up for the challenge."

"Me and my wife, money is the last thing on our minds," he said of Monique, his childhood sweetheart from Live Oak, Fla. "We grew up dirt poor. I’m doing way better than 99 percent of the people.

"We’re not the type of people who just blow money. We’ve barely touched our signing bonus from two years ago. I’m not going to be one of those guys when they leave this league they’re broke."

When the NFL Competition Commitee then allowed the defensive leader to wear an earpiece, the team immediately put the defensive headphone on Davis. Playing in all 16 games, he wound up in a three-man rotation at ILB yet still put up 90 tackles for the Cleveland squad.

Denver will probably use Davis as a rotational LILB. He will have a chance to compete for the starting position, and I believe that this will reduce the odds that Denver will take Rey Maualuga, another ILB, with the #12 pick in the draft. With Spencer Larsen, DJ Williams, Mario Haggan (perhaps) and now Davis, the Broncos have a decent if not stellar group of potential ILBs. What they really lack is a stud on the edge, a player who is equally good stonewalling the run or pinning his ears back and chasing down the quarterback like a lion taking a gazelle. Brian Cushing, despite his issues, is a better fit for their needs and there are several good players at both DE and OLB for them to choose from. Believing that Jarvis Moss and/or Elvis Dumervil can make the transition is putting the cart in front of the Bronco. Wesley Woodyard may be an excellent ROLB, but the left side is a cipher that Boss Bailey's occasional (and brief) visits don't fully address.

Andra Davis' previous connection to Denver will always be the answer to a Broncos trivia question. Ryan Torain leaped over Davis for his first (and only) NFL touchdown during the Denver/Cleveland game on 11/06/08. It was immortalized in this photo.

It's a nice shot. Let's hope that Davis, and our new defensive front 7, permit as few pictures like it as possible. Here's to a great man of character whom we are lucky to have. I hope that he and the Broncos can help each other out over the next two years - or longer.