Share All sharing options for: MHR University - Smash-Mouth Systems at the NFL Level

In the earliest days of football, football was not a passing game.  The passes that were made were closer to rugby passes (two handed, lateral, underhanded throws with some spiral).  The game was also brutal, and dictated much more by toughness and strength than finesse or speed.

Flash forward to the present, where the NFL is a wealth of different approaches.  Is there room for the "old ways"? 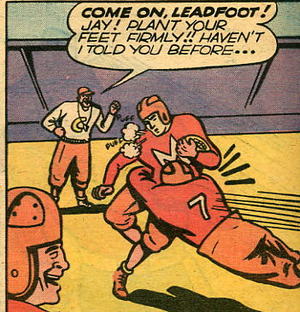 Smash-mouth football is an offensive style of play categorized by several elements.

There are two ways to look at such an offense as a fan.  On the one hand, there is very little flash involved.  To the casual fan, it can be a boring spectacle.  But to the purist, the approach is something to behold.  As a defensive coordinator, I could make adjustments to just about any kind of offense.  But when a team just rams the ball down your throat and out-muscles you, there is very little to be done.

Keep in mind that it can be hard to label a team, and labels are approximations.  Coach Shanahan denied that he ran a West Coast Offense, though several observers (myself included) would disagree.  The difference between the smash-mouth offenses can be difficult to distinguish.  I would call the Bears a 3 Yards and a Cloud of Dust team, the Steelers (just a few years back) a Run to Daylight team (many would call it an Erhardt-Perkins with very good reasoning), and the Panthers an Erhardt-Perkins team.  Some would disagree, and have good points for doing so.

Note also that a few systems have modern variants.  What constituted "low passing rates" a few decades ago would not be seen in the modern smash-mouth systems.  For example, the 3CD system under Coach Hayes might run about 8 pass plays a game.  Against modern defensive systems, the pass rate would be much higher, yet still much lower when compared to non-smash-mouth systems.

Let's take a look at the four systems that are to found at the NFL level.

This is the most simple form of smash-mouth football.  Simply put, the offense holds their passes to about two or three per quarter (on average), and runs the ball up the middle with either the RB or FB.  Many people will mistakenly credit Woody Hayes for the offense.  At Ohio State in the 1950's he was known for a heavy dependency on running the ball, and the quote that many folks remember him for is, "Only three things happen when you throw the ball, and two of 'em are bad".

But Woody Hayes didn't invent the concept.  Instead, he kept the practice alive when many other collegiate programs were fully embracing the pass game.  Hayes' big contribution is he demonstrated  that a team can still win without a passing threat, even moving into the modern age.

In its most modern variant, "3 Yards" features more passing than it did in the 50's, but is still a general, catch all term for teams that stay away from the pass and hit the inside on runs.

Along came Vince Lombardi and the first real pro-level application of smash-mouth football.  The Run to Daylight plays are predecessors to the modern "zone block" plays, in so far as they allowed the RB or FB to choose the best lane to hit instead of a predetermined gap.  (However, in RtD the OLmen don't block zones).  There is no reason that a zone block program can't be part of the RtD though.

The RtD featured sweeps (runs to the edge) and off-tackles (runs to the gap inside the TE), with the idea that the RB is not commited, but can "run to daylight.

Here again, passing is at a minimum.  But an RtD team will run to the outside more than a 3CD team, and can feature RBs that are faster or cn catch screen passes.  Short, high-percentage passes are in the playbook, but not used much.

In the modern incarnation, teams often stretch the field side-to-side to set up the vertical pass lanes.

It is debatable if this is even a smash-mouth system anymore.  In its inception, the system did not use much passing, and the RBs were either pass blocking or running (rarely, if ever receiving).  Today, the system has evolved to use more pass plays than before.  The year that the pass-happy Patriots lost to the NY Giants (after being undefeated up until that SB game), the team ran the EP in nomenclature only, eschewing the running game.  They had become more of a spread offense.

But there is more to the EP than the above mentioned traits.  Like the Coryell, the system features its own naming system (nomenclature).  It is heavy on play-action passing (faking the run, then passing).  It also features a lot of flexibility in formations, where players' types and shifts in the formations lead to an incredible number of variations that can easily confuse defenses.  (This fits well with the Patriots and their Amoeba philosophy - adapting to the opponent).

Some would call Pittsburgh an EP team.  The strongest argument would be their continued usage of the EP nomenclature for play calling.   The only team that ran EP in 2008 for certain (I don't think there would be any argument on this point) was Carolina.  Denver is likely to move in this direction, but it remains to be seen if it will be the original smash-mouth version.

From time to time, pro-level teams will run a series of plays related to a smash-mouth system, while not fully adopting the system itself.  The most dramatic example in recent years was the Wildcat, adopted with early success by the Miami Dolphins in 2008.  The plays and formations were very close to the unorthodox "single wing" (featuring, among other things, direct snaps to a RB).  It was a lot of fun to watch, until defenses caught on.

KC Offensive coordinator Chan Gailey has a history with smash-mouth systems.  At the college level, he ran the triple-option out of the Flexbone formations.  At the Air Force Academy (where he was a DC), he was exposed to the multiple-option approach that the AFA was running.  WIth Pittsburgh, he ran a system that was a cross between the EP and the RtD.  For Broncos fans, it is worth noting that he came to KC in '08, and now has a potential QB in Cassel to try out some new wrinkles.

I love smash-mouth football, and many purists do too.  Fancy-pants football doesn't work if your guys are being carried off the field on stretchers!

But like all systems, the smash-mouth systems are only as good as the players and the coaches who run them.  Speed kills, and slow but tough players pay a major price if they aren't in the right place at the right time.

Like many other pursuits, football operates on a pendulum.  In some seasons, teams with finesse win out (how 'bout them 49ers and Rams), while in other years, teams like the Ravens, Giants, or Steelers get their turns.  As I always say, there aren't "better systems", just teams who run their own systems better.

Some may be bored by watching a team trudge slowly down the field, foregoing the passing game and not getting many long runs.  Me?  I like to win, and if that's what it takes....