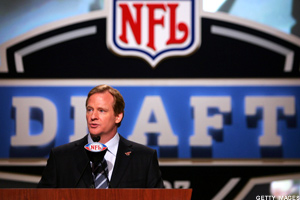 Big news here at MHR and SBNation as a whole. 2009 has the makings of the most historic draft in Broncos history and MHR will be there!  The NFL has officially credentialed myself and BleedingGreenNation to cover the NFL Draft April 25-26 at Radio City Music Hall in New York.

We will be live in person covering the draft delivering real-time updates and hopefully getting lots of chances to talk with players, league insiders, & analysts. This is big for MHR and the company as a whole and will take our draft coverage to another level.

Whether it is via live posts here, Tweets via Twitter (Follow Me HERE) or video uploads later in the day, MHR and BGN will have your 2009 NFL Draft covered from #1 to Mr. Irrelevant.

If you guys have any suggestions or things you'd like to see or hear from the event, let me know.