I get a lot of e-mails, and here's one that really caught my attention:

I'm trying to understand the connection and the differences between "press coverage" and "B&R".

Much of the material I have read doesn't necessarily distinguish between the two.  In fact, much says that B&R starts out as press coverage, so clearly they're different concepts.

Also, if you're up to it, what does the DB do after he jams the receiver?  What does the "run" part of B&R consist of?  I read an article by Bob Stoops and he talked about using a trail technique which transitions to what he called a cut-off technique.   Tom Bass at NFL.com, however, says that you never trail a receiver.  Rather, you run even with him, staying on his inside shoulder.  Apparently there's two ways to play B&R.  Is this the case?  Is it what the coach prefers?

The other thing that confuses me is what dictates where a DB aligns pre-snap?  Inside shoulder?  Outside? Or head-up?  For this question I went to Coach Huey's X's and O's website and discovered that there's two situations that determine where the DB aligns: one, the type of coverage being played behind him or, two, the WR's distance from the formation.  Apparently this too is a coach's preference in how he schemes his coverage.

I guess what I'm asking is what is press coverage and what is B&R?  If you have the time and the inclination, I'd appreciate your insight.

Thanks to John Garner for the excellent questions!  Let's take a look at 'em.

First, let me suggest that those readers interested in the CB position read these two MHR University articles to gain some background:

The Cornerback position, and

How Safeties Interact with Corners

Terms like "Bump and Run", "Tight Coverage", "Jam" and "Press Coverage" mean different things.  Unfortunately, a lot of commentators and coaches throw around the terms and rely on the listener to know what they mean because of the context the term is used in.  If I'm with another coach, I might understand that he's using a term to convey several different ideas.  I might even get lazy and use a term that isn't correct, but understood in the right context between two coaches.

But this creates a problem when commentators (during games) or writers assume the listener or reader is aware of the intricacies of football's own language (which can vary by region and playing level).  Football has its own language, and context can play a role in the meaning of the words.

Take the term "running back".  A full back (FB) and a running back (RB) are both running backs.  But understood in context, the RB is the player generally assigned the runs (and generally lines up behind the FB) while the FB is more often a run blocker.  Now throw in the term tailback (TB), which in some regions of the country means only the specific RB player, not the general type (RB & FB together).  Tailback is regional, and not as widely used as RB.

Let's keep this in mind, and look at each of John's questions.

Bump and Run - This means the CB will "jack" or hit the WR when the WR starts to move, then cover him closely when he recovers.  There is no context involved; the definition is absolute.

Tight Coverage - The CB lines up as close to the WR as the line of scrimmage allows.  This is an alignment, but yet another context means that the CB will play close to the WR during the route.  It may or may not be used for "bump and run".  The confusion in context is almost always because a player lining up in "tight" coverage is going to play "tight" to the receiver after the play starts anyway.

Jamming - The CB will make contact (as in bump and run), but instead of an initial "pop" or "jack", will prolong the contact.  More risky (higher chance of penalty, higher chance of lost contact if the WR evades and breaks down the field), but high reward if successful.  A lazy commentator might use this term to mean bump and run, but that would be incorrect.

Press coverage - Close to the line (as in in tight).  However, this term is often used to convey that the alignment started off as "on", then the CBs moved forward.  Unlike tight (which can go bump or not), "press" is often used in the context that the player is expected to bump.  (See the article on corners for defining "on" coverage).

What does the CB do after the B&R?  Is Stoops or Bass right? -

Right after the "jack", the CB attempts to position himself inside (between the WR and the QB), keep his shoulders squared towards an imaginary point in front of the receiver, then "read the WR's hips" for an indication of which way the WR will break.

Both writers are correct, but perhaps not clear in what they communicated.  First, Bass is correct that you don't "follow" a WR.  If you fall behind the WR, you can't really break up the pass.  The best you can hope for is that the receiver slows to make the catch and then you make the hit.  But if that was your intent, you should be playing "over" the WR, or playing a zone.

But Bass isn't 100% clear either.  He says you run "even" with the inside shoulder.  Well, that's correct, but a little idealistic.  Anyone who has played at DB knows that you can't stay "even" for long.  That's why the longer the QB gets protection, the better his chances of a completion.  Also, Bass uses the word "trail" instead of "follow".  Trailing is a technique, as Stoops points out.  It is not the same as "following" (even though both words would seem to mean the same thing).

The cutoff technique is a real technique.  When a player comes from "over" coverage (whether in man or zone) and cuts off the pass, we call that "jumping the lane".  When a DB cuts in front of a pass from underneath, we call that a "cutoff".  The "trail" is not following the WR.  "Trailing" means that an underneath CB is behind the WR in terms of a straight line, but can change the direction of the race (for the ball) by making a turn.  (For those rare individuals who share my passion for yacht racing, you understand the concept of a pivoting finish-line in sailing; same thing). 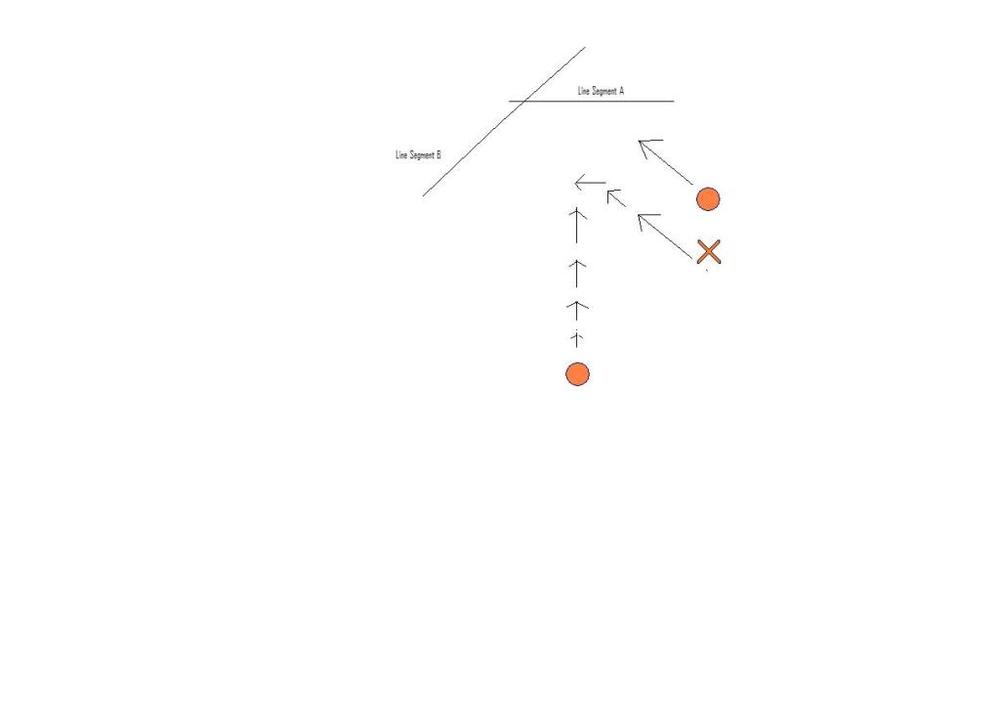 Imagine that the bottom circle represents the QB, the "X" is a CB, and the upper circle is the WR.  In a foot race to the horizontal line at the top (the end zone) the WR is in front.  Thus the CB is in "under" coverage.

In a foot race to the diagonal line (the direction in which the two players are traveling), the WR is still (very slightly) in front.

The QB can see that the WR is in front, and should lead the pass in front of the receiver.

However, where are these guys REALLY racing to?  The BALL!  And if the QB leads the ball, the "trailing" CB simply turns so that he is running perpendicular to the line of travel with the ball.  The CB will reach the ball first.  (The line segments we've used would now become diagonal (top left to lower right), and the line would rotate as the CB gets closer to the ball.

Was the CB behind the WR?  Yes and no.  In a straight line of travel, or in a race to the end zone, yes.  But the race is towards "where the ball will be", and if the trailing CB pivots his direction correctly, he's never really "behind" the WR at all because the real direction of travel becomes "to the ball".

Only in non-Euclidean math and football does the quickest path not require a straight line!

Does a CB line up inside, outside, or head up?

Never on the outside.  Heads up or slightly inside is almost always at the preference of the individual CB (depending on his skills at pivoting, firing off the snap, and ability to back peddle).  There are exceptions...

Otherwise, a good coach lets the CB adjust for what makes the player the most comfortable.

Thanks to John for his terrific questions.

And don't forget; while you're watching the draft coverage this weekend, keep your computer focused on MHR for some great coverage (including MHR's own Guru - on site with a press pass and a big pitcher of energy drink).

You'll get on-site coverage from Guru, as well as instant analysis from the staff and membership of the best football blog on the planet.