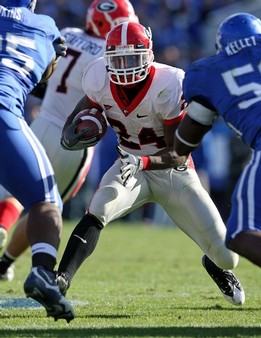 And with the 12th pick in the NFL Draft, the Denver Broncos blow people away and take Knowshon Moreno!

Every season, there are certain running backs who capture the excitement of football fans all over the country. The ability to juke, the power to overrun, the soft hands receiving and the hard hits of blocking all have their proponents.

A very few players seem to have all four of those talents. Those players will inflame people's enthusiasm, ignite their passions and arouse in them a desire to see this guy, this one young man, as the next integral piece of their NFL team, a belief that this single cog will be the battery off of which an offense can be run. This year, hands down and without question, that player is Knowshon Moreno - and he's a Denver Bronco!

At Middleton South, Knowshon was coached by the talented Steve Antonucci. He wasted no time vaulting his team to the top - while he was there, they won three state championships. He rushed for a total of 1,629 yards with 28 TDs in 11 games as a senior (his Georgia Bulldogs bio has him at 1,808 yards on 185 carries and scored 43 TDs in 10 games as a senior, but bio pages are notoriously inaccurate - they exaggerate). In all, he would finish his high school career with 6,268 yards, 128 TDs and 1,782 points, the most in New Jersey HS ranks (he is second in all-time yards). In a classic example of boys against men, he rushed for 457 yards in one single game.

Heavily recruited, Moreno eventually would sign his letter or intent to Georgia. He redshirted his freshman year and concentrated on studies, having chosen the unusual major of ‘housing'. Returning as a redshirt freshman, he shared time with Thomas Brown at RB. Interestingly, according to Georgia offensive coordinator Mike Bobo, Moreno isn't a running back.

"I'll say it like this," he said of Moreno. "Sure, he plays running back, but that's not how the coaches here saw him.

"We saw him as one of the toughest guys on the team, a guy willing to do anything at any time. So that's what we thought of Knowshon, not in terms of position but in terms of being a football player." 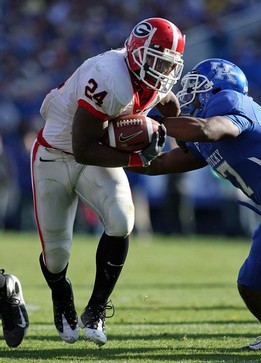 Bobo might not have seen him like a running back, but he sure played him like one. By the end of that season, Moreno was the unanimous SEC Freshman of the Year. He was the featured tailback on the Freshman All-American first team, All-SEC first team, SEC All-Freshman team. To round it out, Moreno was The Sporting News' Freshman Offensive Player of the Year. He carried for 1,336 yards and 14 touchdowns on 248 attempts with an average of 5.4 yards per attempt and pulled in 20 receptions for 253 yards more.

In his second season at running back, Moreno began to pile up awards as fast as he did yards. Knowshon amassed 1,400 rushing yards on 250 carries for an average of 5.6 yards per, along with 16 touchdowns. He complemented those rushing numbers with 33 receptions out of the backfield for 392 yards, an impressive 11.9 yard average (quite high for a running back) and 2 receiving touchdowns.

Any way you look at it, his two-year stats were somewhere between superb and legendary. He also garnered almost as many awards and accomplishments as he did yards...

Following his sophomore year, Moreno surprised no one by declaring for the NFL draft. If he felt in his heart that he had proved all he could at the college level, who could blame him? There is no question that in a year in which RBs are less than they were in the 2008 draft, along with Beanie Wells, Knowshon stands head and shoulders above the rest of the pack. Certainly there are good value RBs out there in several rounds, but Moreno has a much better-than-average chance of being a stellar player. Georgia coach Mark Richt noted that he'd coached Warrick Dunn and Sammie Smith and said:

"He's as good of a running back as I've ever coached. He doesn't have a weakness."

some say of Moreno is that he may be too light to last in the NFL. You can ask Minnesota's Adrian Petersen about that., since he's putting on weight to survive the rigors of the NFL season. While Moreno showed up at Combine at 217, 7lb. heavier than he was in college, it's rare that such a fast weight gain will survive the rigors of training camp. Short of chemical intervention, it's very rare to see that kind of gain in muscular weight. But, seriously, the weight issue isn't necessarily a deal breaker. Other men of his weight have done very well. Terrell Davis entered the league at 5'11" 210 lbs, and he seemed to do all right.

It's also worth noting that Moreno has been timed as slower than you would expect since he gained that weight. That's part of the second issue surrounding him: he lost ‘traction' in the draft by running a 4.60 at his Combine and yet gained on Georgia's Pro Day. Again - that timed speed isn't a deal breaker either. For many players, it's how fast they play and so far he's done very well. 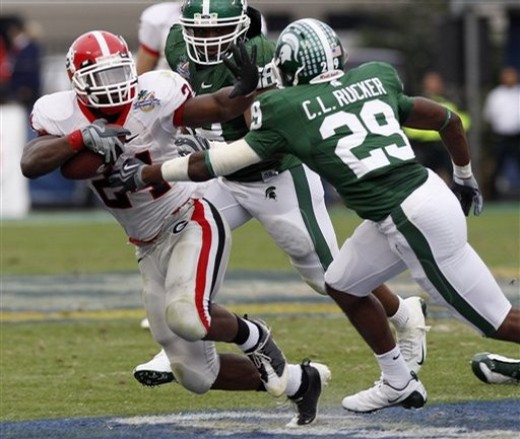 Walterfootball.com had this to say.

2/23/09: Ouch. A 4.60? It should be noted that Knowshon Moreno was one of many running backs who ran a conspicuously slow "official" 40 on Sunday. I get the feeling that the person in charge of getting the official times was either leering at one of the cheerleaders or taking LSD. There's no way everyone was a tenth slower than the unofficial times.

3/22/09: Knowshon Moreno once again ran a 4.60 at his Pro Day, so he can't blame Indianapolis' slow surface. I still can't see him falling past Arizona at No. 31, but his chances of going in the top 20 are getting pretty slim.

But there is a bright side. Returning for a moment to NFLDraftDog report on Knowshon:

Moreno exploded onto the college football scene during his freshman season at Georgia in 2007. Invoking memories of legendary Bulldog Herschel Walker, Moreno carried 248 times for 1334 and 14 touchdowns in his first campaign in Athens. Showing skill in the passing attack as well, Moreno caught 20 passes out of the backfield for 253 more yards. He had a good season as a third-year sophomore in 2008, but it was a disappointing one for Georgia and therefore for Moreno as well. He did, however, rack up 1400 yards on the ground and 16 touchdowns. Moreno is naturally blessed with a nice blend of size and speed, but it is his athleticism, vision, and ability to hit the hole that sets him apart as arguably the best running back in this year's draft class. In one of the few instances in which Moreno did not see a place to go against Central Michigan earlier this season, he simply jumped completely over a helpless defender and continued on down the field. Even after the initial hit, Moreno often can get an extra yard or two with relative ease and rarely goes down before getting gang-tackled. His 40 times in the 4.6 area at both the combine and UGA's pro day were a bit disappointing and will most likely keep him out of the Top 10. An All-American on the field, Moreno has never been anything other than a strong example off the field as well. Look for him to go off the board near fellow RB Chris Wells somewhere around 15th or 20th in the upcoming draft.

One thing that gives me pause (in a good way) about Knowshon is that our own draft guru, styg50, has him as one of only three six-star players (along with Aaron Curry and Malcolm Jenkins) in the draft. Here's what he said on Moreno's MHR draft page,

Pros: All around RB with good size, strength, speed, acceleration and most importantly, desire. Gives 100%, very coachable. Good hands out of the backfield.

Cons: Physical runner who will take some punishment (ala Clinton Portis). Not top speed or size.

Styg's Broncos "Fit": Easily one of the most dynamic players in the draft, it isn't Knowshon's measurables that elevate his play, but his unwillingness to give up. His measurable s are good enough to aid him in historic production in his efforts to win ball games, and his vision, cutback ability, quickness, receiving and ball handling all grade out at the top. He is no slouch as a blocker and knows how to follow blocks, and he is a smart, confident player who has no trouble absorbing and understanding plays. His athleticism is rare, and for every scout or analyst who tells you that Moreno plays too physical for his size, there will be an offensive line coach who pines after a football player. A can't-miss prospect.

In addition, I asked Knowshon-Moreno enthusiast extraordinaire Steve O' to give me his take. He quoted an ESPN article on Moreno:

"When the team ran stadium steps, at 6 a.m., Moreno bounded the stairs two at a time, passing his half-asleep teammates and hollering all the way to the top. His intensity caught many teammates off guard and plain pissed off some upperclassmen. But when they realized Moreno wasn't going to back off or slow down, their attitude changed.

"He works every play at 100%, and eventually that rubs off on you," says fullback Brannon Southerland, a senior. "I'm three years older than Knowshon, and I look at him as a leader."

Moreno's genius is in substantial part at making people miss. That's a lot harder to do in the NFL, but the combination of Knowshon and Peyton Hills charging the line as the classic Thunder and Lightning has to excite even the most placid of fans. This is a chance for Denver to do some serious offensive damage. 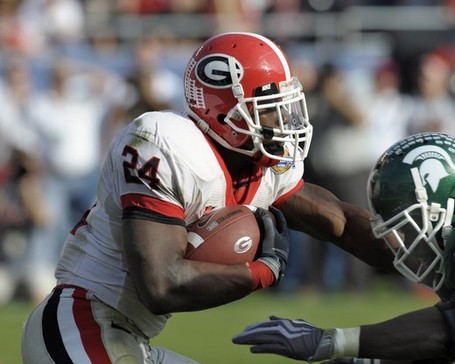 The camp that looked for a defensive force might be disappointed, but Knowshon Moreno is a player to excite the crowd and vitalize the offense. If fans are looking for a team that can score more points, they have to be willing to consider that Moreno will merge well with the other Broncos. McDaniels has made a bold statement - the Denver Broncos are looking to win right now!

How big is the buzz on Knowshon? EBay is already selling copies of his ESPN magazine issues, with Moreno on the cover. That's some serious buzz for a player who gets people wildly excited. We can see him exciting fans for years to come. With the new offense that Josh McDaniel is ready to run, this is an exciting start to the year. Here's looking at the newest Denver Broncos!