Share All sharing options for: The Denver Broncos 18th Pick in the NFL Draft - Robert Ayers!

A surprise to many fans but a common choice on the mock drafts, the Denver Broncos have taken Tennessee defensive end Robert Ayers with the 18th pick in the NFL Draft. Head Coach Josh McDaniel is looking to make a statement about his defense - his players are going to be very athletic, hungry for coaching and very, very versatile.

Styg previewed Robert Ayers for us on his PreDraft Analysis. Here is what he had to say:

Pros: Powerfully built athlete. ... Good lower-body strength to hold up at the point of attack. ... Flashes the ability to anchor and split double-team blocking off the edge.

Cons: Lacks an elite first step or the straight-line speed to be true edge rusher. ... Relies more on varying his speed off the snap and strength at the point of attack, rather than pure athleticism to make plays.

Styg's Broncos Fit: Ayers' technique really impressed me, and later, when I read that the knock against him was that he didn't have a good first step, it seemed to me that the other evaluators were missing the point. While 4-3 teams are complaining that Ayers isn't quick enough off the edge to help them with their pass rush, 3-4 teams will be anticipating getting a great value. Ayers anchors well vs. the run, and is great at keeping low and keeping blockers away from him. He has all the moves, and specializes in changing up his first step - sometimes quick, sometimes slower, to keep the blocker off balance. His experience and success at DT should give him the right attitude to contribute quickly, and his football intelligence should make him an attractive option for McDaniels and Co. The drawback is his relative overall inexperience lining up as a starter. Recognition and other playing-time-centric skills may be undeveloped, or he may be the classic "one-year-wonder" of draft bust fame. From my viewpoint, what he can do is for real, but he will have to expand his game to guarantee a spot on the defensive line long-term. Four stars for what he is, and what he can provide right now.

Ayers has been shooting up the draft boards, and this tells us that there is good reason for that. Mike Maylock had him as the #1 DE in the draft, higher than Tyson Jackson or Brian Orakpo. Bronco fans are going to get to see just how far this man's incredible athleticism and desire can take him. 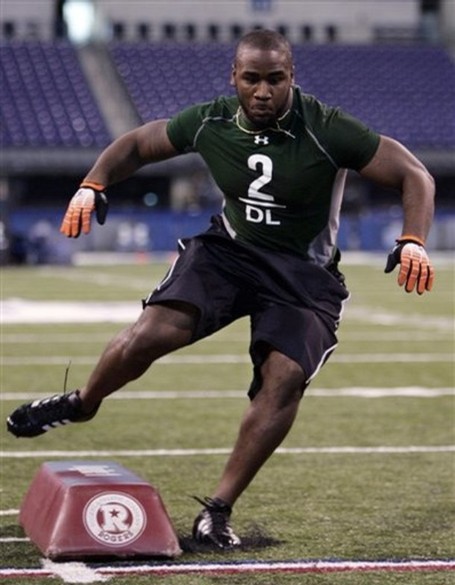 When Ayers first came out of Clio South Carolina, he came to the University of Tennessee with a serious attitude and a lot of cocky self-confidence. He had lettered in track as well as football, competing in the 100 meters dash and the 4X100 meter relay. He made a bad name for himself on the team. No one questioned his athleic ability or his courage - he played the last two years in high school with a torn labrum in his shoulder - but they did question his ethics and dedication. He didn't listen well to coaching at that younger age.

He was in trouble with the law at one point, and that served him notice on the way his life was going. He came back to football a changed player. He began to beg for coaching, improved his technique and won a starting position on the Tennessee squad. Robert Ayers looked at his life, didn't like what he saw, and set out to change it. 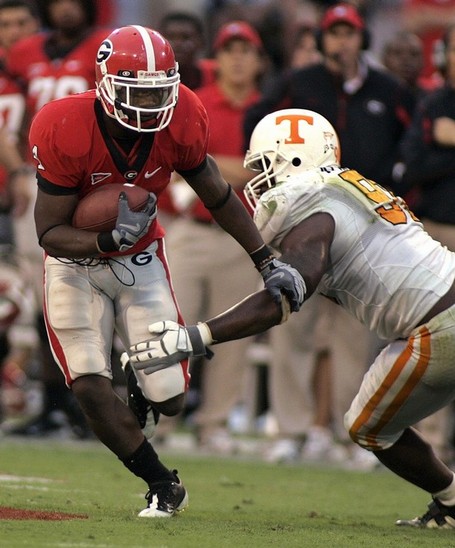 Robert Ayers won the starting job and went on to lead the team in tackles and sacks. to really put the exclamation point on his senior season, he went to the Senior Bowl and promptly made a name for himself iby getting the best of Andre Smith then coming through with a standout performance at the Senior Bowl. This is a player who has come up through the ranks and is willing to do what it takes to be a standout NFL player.

There are going to be those who will question Ayers' maturity and work ethic. He has been called a 'dangerous pick'. But there is no denying the skill, speed and the renewed maturity of the young man. He was voted all SEC by the coaches. He became a vocal and respected team leader during his senior year. for every commentator who distrusts this pick, there are others who believe that he has the versatility to be a powerful and effective player in the 3-4 and the 4-3 formations.NFLDraftScout.com said that Ayers "could be an ascending player who is just beginning to scratch the surface of his vast potential."

Tell us, Denver fans - what do you think? 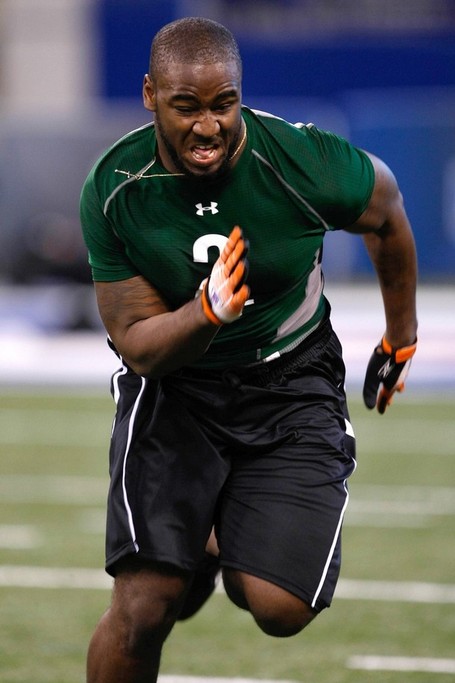