Denver Broncos history forever changed directions with the departure of Jay Cutler.  Though many of us have been severely wounded by this disaster, it is time to review and reflect on our former first-round draft pick's short and tumultuous tenure with our beloved Broncos.

Drafted #11 overall in the 2006 draft, Jay Cutler immediately placed Jake Plummer on the chopping block.  Plummer wouldn't have to wait long as he was benched after leading the Broncos to a 7-4 record, but only 17.7 ppg and an offense that lacked explosiveness.  We cannot really blame Plummer as he was in a no-win situation.  He had mistakenly thought all he had to do was win football games, but what he didn't know was that Mike Shanahan wanted something Plummer would never have - God-given physical gifts.  Jake Plummer was a working-man's quarterback and I can't fault him for anything.  He won a lot of games for us.  That said.......

Jay Cutler would struggle out of the gates, but also gave fans flashes of greatness. In his first start (Video), he would throw one of the worst passes anyone has ever seen that was picked off and returned for a touchdown only to have Cutler and Brandon Marshall connect on a 70-yard touchdown pass late in the game to tie it up. The Seahawks would win on a last-second field goal, but the rocky start for Cutler would improve over the next few games.

After a blowout loss to the Chargers, Cutler would put together a string of two impressive victories over Arizona and Cincinnati. Sitting at 9-6, the Broncos only needed a win over the lowly 49ers to secure a playoff berth. The Broncos would fail to punch the ball into the end zone on three separate drives, allowing the 49ers to stay close enough to secure the upset win in overtime, 26-23 (Video). The fans had even gotten so frustrated that they cheered Jake Plummer when he came in to replace Cutler, who was shaken up early in the game. He subsequently threw an interception and the Jake Plummer era officially ended for all eternity.

Although the loss was heartbreaking, most fans had a sense that we were in store for some great things and optimism flooded the Mile High City. Mike Shanahan went out and spent some money to bring in what he thought were proven veterans. Guys like Travis Henry, Simeon Rice and Sam Adams. The Kool Aid was strong enough to fool any Bronco fan into believing we were on the cusp of greatness.

All seemed to go according to plan when Jay Cutler orchestrated some last-minute heroics against Buffalo on opening day. Converting several fourth downs, which set up a rapid call for "Toro, Toro, Toro" that sent Elam out for a rushed field-goal kick that sailed through as time expired to give the Broncos a 15-14 win (Video).

There was trouble brewing on the horizon though, as the first game of the 2007 season so aptly pointed out to any person perceptive enough to notice. That trouble was consistency. Consistency in the red zone, consistency on defense and special teams, and consistency at the quarterback position.

Cutler and the Broncos would luck out in a win over the Raiders in Week 2. It was a game the Raiders should have won, but Shanahan got lucky with a once-in-a-decade "freeze" of a kicker that worked. However, the wheels came off rather quickly as Denver went on to lose five out of their next six games, culminating in Detroit with Jay Cutler throwing in the white towel and giving up on his teammates (Video). This, of course, is not what anyone said about his so-called injury, but in retrospect I have a strong suspicion that he could have played through his injury that day but just didn't want to. Although I might be unfair, as the guy was playing with an undiagnosed illness (Type 1 Diabetes), but the fact is he didn't fight in the trenches with his teammates in the second-most embarrassing loss of the season - losing 41-3 (Video) at home to the Chargers is likely the most embarrassing loss the Broncos have suffered since the 55-10 debacle in Super Bowl XXIV.

Cutler would come back to lead the Broncos to two consecutive victories, but then the wheels came off again after a Monday Night beat-down of the Tennessee Titans, 34-20. Jay was faced with some tremendous adversity in the following week against the Chicago Bears. Many of you have blocked this game out of your memory, so here is a refresher. The Broncos would go on to lose four out of five games, finishing the season with a losing record.

I believe this may have been the point where Shanahan might have been fired, but as luck would have it Shanny had something to blame that wasn't a defensive coordinator. Jay Cutler was playing with Type-1 Diabetes, which apparently explained why the team was so horribly inconsistent. Pat Bowlen bought it, the fans bought it, everyone bought that explanation. It made sense, why else would a top-ranked offense be so horrible at scoring points? Right?

Mike Shanahan must have had trouble reading the tea leaves, because he again went out to get some expensive free agents. This time he went for some low-profile, high-character guys and then signed them to expensive salary cap-unfriendly deals. The result was another over-hyped offseason which would lead us Kool-Aid drinking fans into believing we were again on the cusp of a 13-3, championship season.

This facade would remain through the first three weeks of the season and Jay Cutler was looking like John Elway reincarnated. He is even quoted as saying his arm is stronger than Elway's. Quite a statement from a 24-year old, but us fans ate it up. The new, improved Jay Cutler would rip off a 41-14(Video) dismemberment of the Oakland Raiders on the MNF Week 1, before heading back to Denver for a showdown with the hated San Diego Chargers.

The game would turn out to be an instant classic, a shootout between divisional rivals and two quarterbacks who openly despise each other. Jay Cutler and the Broncos would streak to a 21-3 lead, but Philip Rivers would lead his team back into the game and even took a late 38-31 lead. Cutler would provide some drama of his own and his near disaster and ensuing heroics would end with a thrilling 39-38 victory (Video).

The Broncos' luck would continue into the next week in another shootout with the New Orleans Saints. Another 21-3 lead wiped out by the opponents, as a Cutler interception would lead the Saints back to within striking distance. To the Broncos' credit, they would never trail, as they held their slim lead on a missed field goal to end the game to edge the Saints, 34-32 (Video).

The wheels quickly came off as Jay Cutler and the Broncos would become the inconsistent, floundering offense it was at times during the 2007 season. They would lose four out of the next five games. Then suddenly, Jay Cutler and the Broncos would come alive. They ripped off four wins out of the next five, including a thriller on Thursday Night Football against Cleveland (Video). Cutler lifted the Broncos to the cusp of a division title, holding a three-game lead with three games to go. 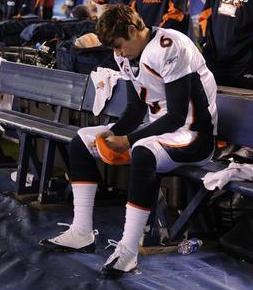 Then, in true Jay Cutler fashion, he choked. He would throw four interceptions to just two touchdowns in the final three games of the season. Losses to the Panthers and Bills would set up a battle for the AFC West Division Title against the San Diego Chargers. It looked like the Broncos had come to play, but with the game still within reach, Cutler would make the critical mistakes that would ultimately lose the game for the Broncos. With the Broncos down 24-6 late in the second quarter, Jay Cutler threw an interception in the end zone. Then in the third quarter, after leading the Broncos to a score to close the gap to 24-13 and after the Chargers scored again, Cutler threw another interception inside his own 20-yard line. The Chargers would increase their lead to 38-13 and the game was essentially over. The final score was 52-21(Video).

The loss would lead to Mike Shanahan's dismissal, along with most of his staff and a disgruntled Jay Cutler would put his houses up for sale and disappear from Denver. The more I look at the entire situation from start to finish, the more I believe Jay Cutler wanted out of Denver long before the McJayGate fiasco. McDaniels will be blamed for Cutler's departure, but I don't think McDaniels ever wanted to get rid of Cutler. This whole deal was exactly what Jay Cutler wanted - even to the point of ignoring his own boss in Pat Bowlen.

The Chicago Bears will get a quarterback who has essentially never improved since becoming a starter. He is a streaky quarterback who, when hot, is unbeatable, yet when he is cold the losses will start to pile up. He has been this way throughout his entire career and though I don't think he will ever become the next "Jeff George", he will likely never win a Super Bowl. He has the ability to rack up Warren Moon- or Dan Marino-type stats, but the playoffs and high-pressure games will be too much for him to overcome.

To back up my point, here is Cutler's career in W's and L's when strung together in one long line:

Time to move on.