Tales from the SunnySide: Lee Robinson

Share All sharing options for: Tales from the SunnySide: Lee Robinson 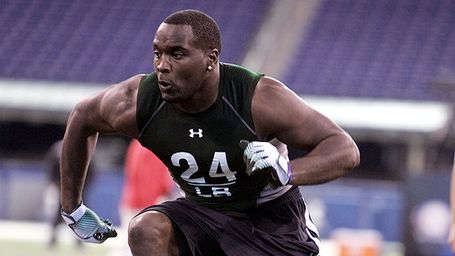 Every year, it seems a linebacker comes into camp that hardly anyone has heard of. Spencer Larsen was just such a player - some scouts had him as too old, too slow, not flashy enough. He just was good at one thing - playing football. A year later, every Bronco fan knows his name, and in Larsen's case, much of the nation has heard of him for either his robust special-teams tackles or his selfless three-way play.

How about Wesley Woodyard? Anyone who watched his preseason play had an inkling that there was just something special about the man. Undrafted as a safety/linebacker 'tweener', it didn't take Wesley long to prove that he had the heart, courage and skills to be what Mike Shanahan would soon say that he should be - a starting linebacker in the NFL.

Coming out of Alcorn State, the small school that also brought Steve McNair to the NFL, Lee Robinson is an outside linebacker who spent some time with his hand on the ground at DE while in college. Blessed or cursed with the versatility of a tweener's label and skills, Robinson is a player whose maturity and dedication have given the Broncos a new level of competition for any and all of their linebacker slots.

To start, he's a solid 6'3" and 250 lbs of linebacker. The Broncos once moved to smaller, lighter linebackers, but it's fair to say that Josh McDaniels prefers something contrastive. He has said that he wants big, physical players who are versatile and can work in multiple situations, which is a substantial description of Robinson. One way to consider Robinson is as a bigger version of Wesley Woodyard. Last year, Woodward took the Broncos by storm. He was considered too small for a lot of teams, but he played well beyond his metrics.

Robinson has all the size that you could want. He plays fast but times slower in his 40s. But much like Wesley Woodyard, he's a heck of a player. How do we know? Take a look at what our own styg50 had to say:

Styg's Broncos Fit:   This guy reminds me eerily of Wesley Woodyard, and that is a damn good thing.  He is a good tackler, reads plays well and is instinctual in following the play to the ball.  Like WW, one of his strongest assets is keeping blockers away from his legs and keeping hands out of his frame, which leaves him free to make the tackle at the line of scrimmage.  His open-field tackling could use work however, as he doesn't consistently break down but he shows a ton of hustle and is quick to congratulate teammates, making him a respected member of the team.  His coverage ability is adequate, though he can't hang very long on deeper routes.  Has all the markings of a late-round, high-impact player.

"Late-round, high-impact player". Late round is relative, as are draft ratings. Robinson was rated in the 5th-6th round, roughly, before his performance at Texas versus The Nation. Practicing, playing and dominating on that stage, he became an instant ‘new thing'. Some had him rising to the 2nd round. But some pedestrian metrics, including a 4.79 40-yard dash at the Combine burst that bubble. So did a draft loaded with OLBs and tweeners. With some stiffness in his hips and problems in zone coverage, Robinson saw his draft weekend ending with a CFA phone call from the Broncos, welcoming him to camp. I consistently saw Robinson rated between the 4th and 5th rounds, so finding him as a CFA is a possible gift.

There are always reasons that players rise and fall: Some are real, some not. To begin, here's a link to a Draft Guys analysis of the player. It shows his lateral speed, and defines how much faster he plays than he tests, and documents his good eyes in coverage.

Next, it would make sense to look at his career numbers:

I would like to look at both sides, so I'm going to start with the best. This is what NFL DraftScout.com had to say:

They were referring to the fact that he has long arms, strong hands which he uses well, a powerful body, upper and lower. He uses those to shed blockers with great skill. How important is that? Ask HT:

This brings me to the ILBs.  They can be fast or big or a good mix, much like in the 4-3, but with a twist.  Because the DL has one less man (even though 3-4 teams fight to acquire double coverage demanding players), the ILBs tend to have one common trait.

According to hoosierteacher, their skill set must include the ability to shed run blockers, or they just won't be an asset.

Robinson also has a factor that seems to be in very good order in Dove Valley. He's a born leader and isn't uncomfortable sharing this with his teammates. I found an excellent article that offered some insights into Lee from his college coach,  Earnest  Jones.

"It all came together this weekend with him playing on the field the way he leads off the field," Alcorn defensive coordinator Earnest Collins Jr. said. "That's got to be one of those things Lee continues to do.

"This was a game that I've been waiting for him to show me, to play like I know he can play. It's one of those deals where now I know he can do it, so I expect him to do it for the rest of the year."

Seeing action at both inside and outside linebacker positions, Robinson leads the team in tackles and interceptions.

"Lee has been a guy we've looked to for leadership the minute he walked into the door," Collins said.

Collins also said having Robinson is like having a coach on the field since the senior played in 31 games since 2005.

"Lee's play makes my job easier because they feed off him," Collins said. "As long as he's upbeat and has the right kind of attitude, they're going to follow him."

His history of injuries is simple - he's never missed a single game. What does concern people, other than the glut of 3-4 OLB/DE tweeners which was voluminous, Robinson has stiff hips in coverage and sometimes struggles to change direction. His footwork can be suspect, but that can be coached- Robinson is very coachable. The best analysis I read of him came from newerascouting.com.

This is what they gave for negatives:

Weaknesses: His competition level helped inflate his stats. Robinson is not a natural playing zone pass coverage. He has stiff hips and doesn't turn directions well. His footwork can be choppy and he can be exposed by quicker backs and receivers. When playing a deeper zone responsibility, he doesn't play as instinctively. When rushing the passer, does not have any well defined pass rush moves. Is not overly muscular and has a bowling-ball type frame that will need leaned out in the NFL. Tends to take too many false steps. Will let blockers get into his body.

You would have to notice that some of the negatives are in contradistinction to all the other scouting reports' positives. That's common in scouting - people see things differently, and a single play can stick in your mind. In general, Robinson is very good at keeping blockers away and his physique at both Texas versus the Nation and at the Combine turned heads. The rest is accurate, though, and there is one other thing that was a consistent concern - he's raw. He needs to learn more technique. One problem with going to a lower-ranked school is that sometimes the coaching isn't as top-level. But the Broncos' is, and we will quickly see how fast he learns. The two things that are constant issues for rookies are the speed and skill of the NFL's players and the need to learn - fast.

Robinson will go to camp and compete against Mario Haggan, Louis Green, and Spencer Larsen. By the end of camp, we will see if his prosperity of potential can turn into a plethora of production. That's why you give them a chance. And all that Robinson has ever asked for is a chance.

The Phinsider placed him in the Best Player You Never Heard Of series.

Lee Robinson (LB-Alcorn State) - Robinson had the defensive play of the practice with a twisting interception snagged out of the air at full extension on a Chase Patton fastball. Robinson showed excellent coordination staying on his feet and turning instantly into a returner after the spectacular pick. He's clearly a tremendous athlete.

Robinson is by far the best athlete of the LBs on either squad, and he uses that edge to make plays. He stayed with speed demon Devin Moore step for step on a deep route, and also stuck to Bernard Scott down the field in backs on backers. He also displayed terrific quickness and drive to penetrate and shoot gaps against the run, and explodes into his tackles. Robinson is definitely one of the best prospects in this game.

Now, he just has to prove it.