Tales from the SunnySide: Kenny McKinley

Share All sharing options for: Tales from the SunnySide: Kenny McKinley 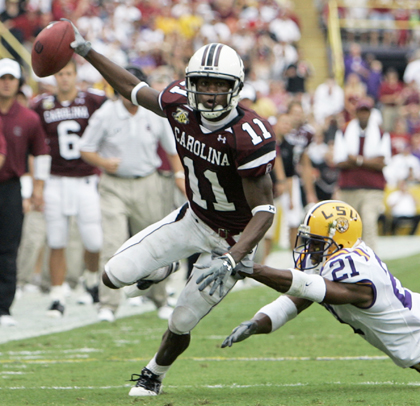 Born in Mableton, Georgia on January 31, 1987, Kenny McKinley was a sought-after quarterback at South Cobb High School. Kenny earned All-County honors as a junior and senior. As a junior in 2003, he racked up 1,575 yards and 12 scores passing and rushed for 400 yards and eight touchdowns more. McKinley threw for 1,470 yards and 16 touchdowns while rushing for 750 yards and 12 more TDs during his senior year, and was ranked as the 57th-best athlete in the country by Rivals.com. You can catch four recruiting videos of Kenny from high school at Mableton here:

Prior to the draft, NFLDraftDog.com commented,

South Carolina's Kenny McKinley (6' 0" 189 lbs) doesn't get much respect and I don't know why. He has gotten it done on the football field for years. He has been a four year starter with 2,781 career yards and 19 touchdowns. Now he goes to the combine and has a very solid performance. He ran a nice 4.44 forty and had the 2nd best 20 yard shuttle time of 4.10 seconds.

Kenny McKinley joined Steve Spurrier's South Carolina squad after a productive high school career as a quarterback who could both throw and run with the ball. The young Georgian made a quick transition to a new position (wide receiver), starting six games. McKinley moved again in his sophomore year (to flanker) and quickly became an impact player for the Gamecocks; he started all 13 games for the Gamecocks that sophomore year, beginning his string of 33 consecutive starts.

This is a very tough young man - mentally tough. In 2007, Despite playing with turf toe most of the year (would undergo surgery after the season for arthritis in that toe), the second-team All-Southeastern selection moved to split end. He led the league and set the school single-season record with 77 receptions. His 968 receiving yards were good for fourth on the school-record chart and his nine touchdowns placed him sixth.

When McKinley eventually missed 3 games his senior year with a hamstring pull, the Gamecocks offense quickly sputtered. His return marked an immediate resurgence of their offensive capacity. McKinley placed his name in the SEC record books; his 207 receptions placed him third in conference history, while his 2,781 receiving yards placed him 12th all-time. How much did Coach Steve Spurrier appreciate his production? There's a group of five retired numbers above South Carolina's weight room now, picturing a framed jersey and a large picture of each honoree. Kenny McKinley's number (11) was included following a ceremony at the Gamecocks' spring game on April 11, 2009. Kenny broke Sterling Sharpe's school records for receptions and receiving yards and caught a pass in each of his last 43 games. During his four years in college, McKinley epitomized production.

Ironically, on the night that McKinley broke one of Sharpe's records (it was his 35th consecutive game with a reception, a streak he would run to 46 games), he was sidelined with the hamstring injury that would dog him the rest of his senior season. That year (2008), he racked up 54 receptions for 642 yards, 11.8 yards per catch and 4 touchdowns in 10 games. Although that was a step down from his highly-productive junior campaign, you had to understand that McKinley was the central - almost the only - weapon on that Gamecock team. Now healthy, it's going to be up to McKinley to stay that way. Kenny had a very good Combine; with a 4.44 40-yard dash, a 37-inch vertical leap, a broad jump of 113 inches and a 20-yard shuttle of 4.1 seconds, he moved up on a lot of draft charts. However, McKinley was fated to come out in a draft class that was very deep in receivers, and that would eventually drop him back down.

The knock against McKinley is simple - he's considered to be too slender. He experienced injury issues during his senior year in college, including his chronic hamstring and the aforementioned arthritic big toe. However, prior to those two injuries, his health was excellent, which also plays into how he will do in production over his career. Even with those problems, his production was excellent. Kenny McKinley plays through pain.

If he's just another receiver that is too slight for the NFL, what was it that drew McDaniels and Company's interest? Consider the predraft report from Scott Wright over at draftcountdown.com:

Like Eddie Royal, another pick that invites comparisons, Kenny McKinley is a very polished route-runner. Highly athletic and incredibly productive, he inspired Steve Spurrier to declare that McKinley was the best receiver he'd ever coached. Given Spurrier's rather storied history, that's a heck of a compliment.

Pre-draft scouting had him going anywhere from that late 2nd round to the middle of the 5th, so it was no reach at all (IMHO) to take him with the 5th pick of the 5th round. Josh McDaniels and team moved up 8 slots to take the receiver they had their eyes on. Despite complaints by some that they were 'reaching' on this pick, other receiving options the Broncos liked had already been drafted and there were rumors that other teams wanted his production and skills. The Broncos chose to move up and take the man they wanted on their team.

After the draft, casual fans unfamiliar with him were left surprised, even shocked at the choice. But those who had watched Kenny's career took a different perspective. cbssports.com had this to say:

COULD SURPRISE: Kenny McKinley produced in college at South Carolina. His 207 receptions are third on the SEC's career list. He fell in the draft because of various injury concerns, but he has some ability and is coming to a great offensive system for a receiver under coach Josh McDaniels. He doesn't have pressure to perform right away because Denver has good depth at receiver, but he could end up being a steal for Denver.

Denver's depth at receiver is one concussion away from needing a new slot receiver. Since many studies show that each succeeding concussion is more easily induced, Brandon Stokley's time with the Broncos could be brief. Given the magic that Stokes has wrought over the years, a best-case scenario would have Stokley lasting for another two or so years while mentoring and training McKinley as the Sorcerer's Apprentice.

I always appreciate a more in-depth look at a player, and this time nfldraftscout.com managed to provide one for McKinley. Consider these attributes:

Athletic Ability: McKinley is a fluid open-field runner with natural quickness and outstanding foot speed, but needs to add much better upper-body strength to defeat the jam. He has very good timed speed, but is not really a vertical threat, as he drifts a lot in deep patterns and can be caught from behind. He shows good agility and balance, with the acceleration, burst, flexibility and body control to gain positive yardage after the catch when he is able to avoid tacklers (does not have the power to drive through a defender). GRADE: 6.0

Football Sense: McKinley is a former prep quarterback who never played receiver before arriving at South Carolina, but came in and started as a freshman, showing very good maturity, both on and off the field. He shows the ability to quickly learn football, doing a good job of digesting the playbook. GRADE: 6.6

Character: McKinley has been a program player at South Carolina, with no off-field trouble. He is well-respected by the staff, so much so that they honored him during the 2009 spring camp and will retire his jersey when conference rules allow it in five years. GRADE: 6.5

Character, football intelligence, athletic ability and versatility are all keys to the McDaniels Way. But how does he approach and play the game?

Quickness: One of his greatest assets. McKinley might be a one-speed runner and needs to gear down, as he tends to out-run the ball. He comes off the snap naturally and has outstanding movement off the ball, but it is negated at times when he fails to bring his arms up to defeat the jam. When he gets a clean release, he shows explosive burst and acceleration. GRADE: 6.6

Separation Ability: McKinley is a polished route runner who knows how to sell and con the defender by varying his speed and executing good head-and-shoulder fakes. He does a pretty good job of getting leverage coming out of his breaks and takes nice, short, pitter-patter steps to force the defender to commit coming out of the backpedal too early. He needs to develop more strength to prevent the defender from aggressively rerouting him. If he is left in isolated coverage, he can use his speed and burst to accelerate and get open. He's very quick in and out of his breaks, but lacks proper hand usage. GRADE: 6.6

Ball Concentration: McKinley needs to do a better job of looking the ball in on deep routes, but is a secure pass catcher on short-to-intermediate routes. He is intelligent and has improved making adjustments. He will go up and compete for jump balls, but is not the strongest receiver you will find. GRADE: 6.0

Ball Adjustment: McKinley can make the tough catch in traffic, but lacks overall finesse when trying to separate on the deep ball. He has the body control and agility to change direction, but does not have the power to break arm tackles. He has a good burst, but doesn't use his second gear much, leading him to get caught from behind. GRADE: 6.1

Leaping Ability: McKinley has the leaping ability to take the ball away. He must learn to time his leaps and bring the ball in at its highest point. GRADE: 5.5Hands: McKinley's hands are good, but he will drop a few easy tosses (looks to run upfield before securing the ball). He shows decent courage going over the middle, but must concentrate to look the ball in. He has soft, natural hands but has to shield the ball better from defenders. He does a good job catching outside his frame and has the loose hips to torque his body to get to off-target throws and passes behind him. GRADE: 6.5

Run After the Catch: McKinley has the speed to go the distance if he gets his hands on the ball, but lacks the leg drive to break arm tackles. He can out-run any defender on the field, but looks tentative in attempts to fight for extra yardage. He shows good vision on underneath routes, but lacks a consistent second gear to elude after the catch. GRADE: 5.3

Blocking Ability: McKinley is a willing blocker but needs to add strength. He will position and pester, but shows marginal intent on contact (finesse-type). For the most part, he will get in the way, but is easily defeated by a physical defender. GRADE: 4.5

There is more - not all of it positive, and I'd recommend that you read all of it. It's a very good analysis. Like all players, Kenny McKinley has strengths and weaknesses. Overall, as a 5th-round pick I have come to believe that he represented a very good value. Since it's a given that the Broncos need to look carefully at the slot position with an eye to eventually replacing Brandon Stokley, Kenny McKinley may be one of the better value picks of the draft.

To achieve an understanding of McKinley as a person and as a player, these two YouTubes are a must-see: Kenny McKinley Part I

Returning for his senior year, he said, "I've got some goals I want to set": Kenny McKinley Part 2

I'll close with these quotes from nflmocks.com

I expect him to go between rounds three and five unless he does something impressive before then. If I were a team in need of a possession receiver I'd take him in a heartbeat. I really think he can make it in the league."

McKinley will always be slender., but his record will be seen in SEC conference history for a long, long time. I can't wait to see what he can do in the NFL. Bring on Training Camp!