Tales from the Sunnyside: Chris Baker

Share All sharing options for: Tales from the Sunnyside: Chris Baker 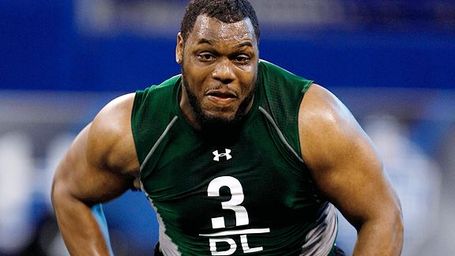 A lie can run around the world twice while the truth is still getting its shoes on. - Mark Twain (Samuel Clemens)

Like all college players whose names weren't called on Draft Day, Chris Baker knows that he has something to prove. He's heard all the opinions - "Boom or Bust," "Must be in the right system," "Left school too early," "Character concerns abound," "Troublemaker," "Takes plays off."

Once projected as a 3rd- to 4th-round pick but left undrafted, the 6'2", 326 lb. Baker knows that he is lucky to have his first chance with the Broncos. Listening to the NFL Draft for two days without hearing your name, your heart gets weighty and your thoughts darker with each passing pick. By the time you're listening to the 7th round and knowing in your very soul that you're a better player than the ones who are being chosen, that darkness can coalesce in one of two ways - depression,or commitment. Chris Baker has chosen commitment

If your choice is commitment, you're going to go out and do anything in your power to challenge people's perceptions of you. From the Hampton University coach, Jerry Holmes, who told the media that he didn't think Baker should have left school, to the media itself who gleefully passed around the allegations of character issues without finding out the story, Baker has a lot of people to disprove.  Print articles like this one claimed that Baker's time at Penn State was marred by ‘frequent off-field incidents'. What they didn't tell you was that ‘frequent' meant allegations of two fights and a single ticket for harboring a ‘dangerous dog'. I don't support either situation, but you could question if two issues and a ticket is frequent. Especially if you learn all the facts.

As broncosmontana dealt with in his excellent post, Chris Baker's high school history teacher and football coach felt that Baker wasn't told the truth in his situation at Penn State. Nittany Lions head coach Joe Paterno initially promised Baker that allegations and charges stemming from an alleged fight would not affect his place on the football team. However, Paterno may have changed his mind when media attention grew. That's not an issue, in and of itself. Sometimes you need to change the response when public pressure increases. Perhaps it did. According to an ESPN video report, from 2002 to 2008, Penn State had a total of 46 players who had been charged with a total of 163 counts of criminal behavior . Many of the charges were dismissed, but 45 resulted in guilty pleas or convictions. It's not surprising that under those circumstances, something had to have been done. Baker was dismissed from the football team.

It might also be telling that his line coach from Penn State, Larry Johnson Sr., has kept a close relationship with the young man despite the situation. Johnson was there for him, even in this difficult time. The coach told him that it was "an opportunity to start over ... and get to the next level."

But this isn't meant to approve or pass over what happened. The fact is that people do make mistakes, young people often make even more and more egregious ones and it will always be true that a person's response to resistance and trouble says far more about them than the problems themselves. They can sit and complain about the terrible plight they are in and the burdens they bear, reject their own culpability or they can buckle down and work through it. Thrown off the Penn State squad, Baker moved down the road to Virginia and Hampton University, and got even better at his chosen craft.

"Everything happens for a reason," Baker mused. "God gave me a second chance at Hampton so I'm just taking advantage of every moment. I could have been mad about everything that happened at Penn State and done nothing with my life.  I used my situation for motivation and overcame everything with the second chance that I was given."

"I wanted to play football," he said, "but I thought I was always too big to play. I have been 6'00 since I was 11 so I fell in love with basketball.  But the moment I got a taste of football my decision was made."

Baker has one leg up on his circumstance - he doesn't lack confidence in himself. Chris knows that professionally, he has all the physical tools one needs to be a successful nose tackle in the NFL. He has long arms, big hands which he uses well to shed blockers, and a powerful lower body. He anchors well and has good explosion. He doesn't mind taking on double teams. The knocks on him are insufficient experience at a high level of competition, a motor that has run hot and cold (some felt that was due to insufficient competition as well) and hips that are stiff when he changes direction. He may lack the foot speed to chase down quarterbacks and runners.

As is common, some of Baker's scouting reports are contradictory. The Sporting News War Room claims that he's not fast, quick or agile. His pro day numbers have refuted that.  He's described as an unusually intelligent student of the game who reads run/pass well, but others note that he is sometimes caught out of position (all players are,  at times). His lack of stamina is noticed, but some also admit that this may be a simple playing-weight issue. If so, proper nutrition and conditioning will dispel it.

What about his character? His high school defensive coordinator wrote, "I really believe that the charges against Chris were against the character that I had grown to appreciate while having him as a player and student." Before games, it turns out that Baker likes to listen to gospel music to get ‘psyched up'. Hunter Ansley of the Draft Zone asked Baker,

"What's the first thing you'll do after signing an NFL contract? Backer replied, "I'm going to give thanks to God first."