Tales from the SunnySide: Everette Pedescleaux

Share All sharing options for: Tales from the SunnySide: Everette Pedescleaux 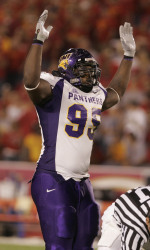 Tyson Jackson stunned a lot of people by being the third player taken in the NFL draft. Many said that this was, in part, because of the laws of scarcity – there were few true 5-technique defensive ends in this year’s draft, making the ones that were there more valuable. The 5-technique DE lines up on the outside shoulder of the offensive tackles, giving them a chance to stack the line, stuff the outside run or rush the passer with equal verve. It’s a staple of the modern 3-4 defense, which the Denver Broncos will be switching to from their traditional 4-3 as quickly as circumstances permit.

In such a circumstance, shouldn’t an athletic defensive end who weighs in at over 305 lbs and has substantial skills have been a widely-discussed and greatly-desired player? Everette Pedescleaux, undrafted free agent out of the University of Northern Iowa brought so little attention that Walterfootball.com, CBSsportsline.com, ESPN.com and NFLDraftracker.com barely listed more than his height and weight. What was it that kept the pundits and NFL teams away from his door, but interested the Broncos enough to bring him to camp?

Everette Pedescleaux was born on January 19th, 1985 in Plymouth, Minnesota, the son of Carl and Lynette Pedescleaux. He’s close to them, and considers his mother to be the biggest influence in his life – “She’s always been there for me,” he said. He also as two sisters, Breyana and Dynette. He attended high school prep at Robbinsdale Armstrong High School in Plymouth and was a two-time all-conference and all-state selection in football and a three-time all-conference player in basketball. He set a prep-school record for career points and rebounds, and was named Mr. Basketball of Minnesota in 2004. He enrolled at the University of Minnesota in January of 2005 but transferred to Northern Iowa before the start of the 2005 season.

He redshirted his freshman and sophomore years, so it’s fair to say that he wasn’t as committed to football as most NFL teams would prefer. If you’re going to spend a draft pick and tens of thousands, perhaps millions of dollars on a player, you want to know that he's going to eat, sleep and breathe football for his professional life. Pedescleaux didn’t show that fire right away.

It’s also fair to say that he considered basketball first, since he was a member of Northern Iowa’s basketball team during his redshirt freshman and sophomore seasons, but he didn’t get to play in any games. He majored in studio art and communications, an unusual education for a pro football player. He played 51 career games at Northern Iowa with 21 starts, totaling 112 tackles, 11 sacks and 6 blocked kicks in his time there. The blocked kicks give you an idea how athletic this man really is. He ran a sub-5.0 forty yard dash during his spring season, displaying great speed for his position. He still wasn’t invited to the NFL Combine.

It wasn’t until his senior year that Everette ‘got it’ about football. Suddenly, things fell into place for him. He worked hard on his technique, refining and developing his skills. By the end of the season, the UNI defense ranked No. 2 in the Missouri Valley Football Conference and No. 20 in the nation in rush defense (105.3 yards/game). Pedescleaux was a big part of that.

Wes Bunting of the National Football Post was interviewed by Jim Kling of the ‘Maximum Grilled’ Steelers site before the NFL draft, and he had this to say about Pedescleaux:

Well, you know, he’s not rated on many big boards or anything like that, but when you’re going through these national Blesto rankings, you see a small school guy, you first want to see what his attributes are: he’s 6’6”, 305, 310 pounds, so right away that’s a great (size) for a 5-technique defensive end to be. I want to see how athletic he is. Well, he’s running a sub-5.00 forty, that’s what he was timed during the spring season. That’s a great athlete right there.

So you start doing a little research on him. He was a finalist for Minnesota’s Mr. Basketball, so again, a great athlete. And then you start digging up whatever tape you can find, trying to do as much research as you can. And going into the year, he was just up and down, never really found his way, but as a senior, really polished his technique, looked like a football player, and with his extreme athletic talents really jumped out on tape. (He) was third-team All-American, had six and a half sacks, but double teamed consistently, and I mean, he can bull rush, handle the point of attack, and just a really impressive guy. In scouting circles, everyone knows who he is, but the average fan, they have no idea who this guy is because he’s from Northern Iowa. But he’s slowly creeping up draft boards, and if he runs as well as many assume at his Pro Day (Pedescleaux did not receive an invitation to the 2009 NFL Scouting Combine), this guy’s gonna jump up and the media will be all over him. He’s a really big-time prospect.”

Bunting's sentiments didn't translate into an NFL draft pick, but Everette will still get the same chance that all the rookies will have - an opportunity to come in, work hard enough to catch the coaches' eyes and to show them that he can produce at DE or even NT. Two keys for the NT position are the ability to anchor and the ability to handle double teams. Pedescleaux was doing well at both, but the Mountain Valley Football conference isn't the NFL. His long arms and athleticism might be better for the DE position. Either way, this is the chance that most players dream of.

It’s a long journey from Plymouth, Minnesota to the NFL. Maybe Everette will make the next leg of that journey. He has the natural tools – the long arms, big frame that could handle even more weight, the speed and quickness. He has the explosion that you look for from a 3-4 DE and he has handled double teams well. Now he has to see if the skills that he so quickly developed can be honed and polished by defensive line coach Wayne Nunnely and defensive coordinator Mike Nolan. He understands what he is facing.

"You know, it doesn't really matter where you go to school," Pedescleaux said. "The way the NFL is, they find you anywhere you play. If you're good enough."

Here’s hoping that he is.