(Many, many thanks to Ted Bartlett for putting in the time to put together the diagrams to illustrate an example Ted Block play.  He was able to knock out the diagrams in less than a day!  My attempts at diagrams take much longer and don't look nearly as good.  Please join me in appreciating his hard work).

In the last MHR University, we took a broad look at the Ted Block scheme.  The concept (used in San Francisco under new Broncos DC Mike Nolan) is very likely going to be seen in Denver's 3-4 this year.  The scheme calls for the LILB to block the way to the QB for the ROLB.

Andra Davis may be the right guy (not very fast, but very physical) to line up at LILB.  Spencer Larsen, who has played at LB but has also played run-blocking duties as a FB is another terrific candidate to clear the way to the QB.

Join Ted and I, as we take a closer look at the Ted Block, including a look at how the different D-Linemen and LBs affect the scheme in a hypothetical play.

As with all play designs in the 3-4, everything starts with the NT.

If the NT is big enough to demand a double team (and remember, in a 3-4 we demand excellence from the NT), the RG should now be concerned, as well as any RBs kept behind to block for the QB.

We (the defense) don't really expect our very large NT to get to the QB.  We only want him to be a threat to the QB; enough to pull a double coverage of pass blockers.  If he can get through, fine.  But it isn't our goal.  We want him to tie up two players.  In our case, we want him to keep the center away from the blitz lane we are setting up between the OC and the RG.

So now we should have the center facing to the left trying to block out the NT.  At worst, if the center is very good and keeping himself squared to the line of scrimmage, the NT is moving to the center's left and drawing in the LG.  Either way, a gap is being widened to the right of the center's position. 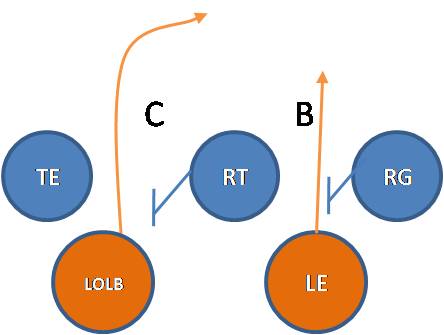 The LOLB gets into the act too.  He'll play 5 technique (right tackle's right shoulder).  He'll shoot the gap wide around the right tackle, helping to pull even more support from the widening gap between the center and right guard.

If our guys mentioned so far are playing their roles with good, sound techniques, then there should now be a wide gap between the right guard and the center.  As a bonus, if our NT is superb, the offensive center has been rotated to face away from the gap.  Rather than take the glory of getting a sack or pressuring the QB, we want our NT to be patient and to be a team player.  By staying in his assigned role, someone else will get the glory, but the play will work because of him.

Now comes the LILB, the "Ted blocker".  Offensive linemen are used to doing two things.  Driving into defensive linemen (the aggressive "run block"), or just pushing off defensive players who are trying to get around them (not through them ("pass block").  They are not used to being targets themselves.  That's what makes the Ted block a punishing surprise. 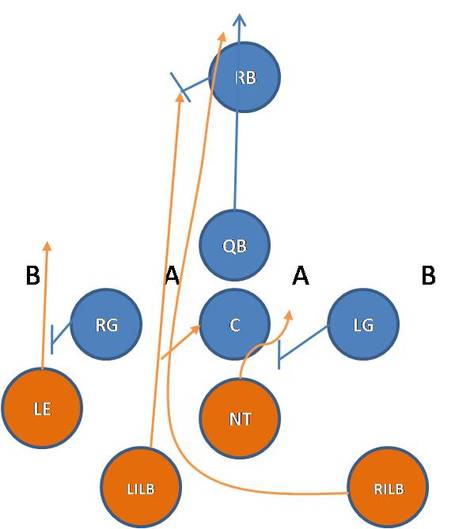 If the offense plays two TEs, there is little (or no) RB support to protect the QB.  If the center has been rotated, the LILB comes flying at the right side of the center's body, and drives into him.  With the center out of the way, you now have the DT, the Ted blocker LILB, and the ROLB all driving on the QB.  If the center isn't rotated, he is at least already moving laterally to his left with the DT.  The Ted can now drive on any RBs in the way (who are only expecting to block the Ted, not to be hit by him).  The entire time, regardless of which scenario pops up, our LILB has been shooting the gap towards the QB unconcerned about anyone in the way.

If there is only one TE, the Ted blocker will drive against the RB assigned to pass block (if there is one).  The more guys the offense has held back to pass block, the less passing options they have (which makes things easier for the DBs).  But we'll more likely save this play for when our opponents present with two TEs.

To buy time for our blitz to work, we'll assign our CBs to "bump and run", preventing quick passes and making longer routes take that much longer.  Our strong safety will take the strong side TE if that TE goes into a route instead of blocking.  Our ROLB will cover the weakside TE if needed, starting his assignment in zone.

Our safeties play deep zone, ready for anything.  If the right TE goes into a route, our SS covers him.  The nice thing about that variation is that, without a TE in blocking, our "distraction" pass rush from the left DE and the LOLB now become as much of a threat as our interior blitz. 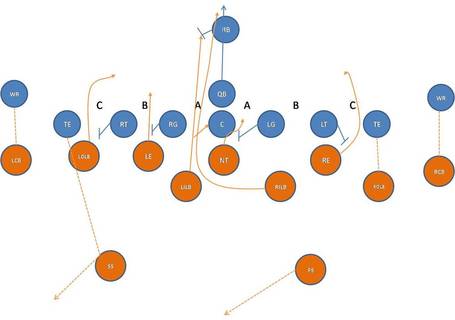 What if the play is a run?  No problem.  We've tied up the gap between the OC and RG (the most common run lane in football), we have a ROLB zoning the weakside who can plug a gap if the play shows run, and the strong side is being tied up by the LOLB and the left DE.

Another factor that makes this play effective is that the 3-4 more often blitzes from the outside, not the inside.  The combination of two unexpected issues (an inside blitz, doubled with a linebacker who is going to punish a pass blocker instead of evading him) is potent.

I recently received an e-mail asking if MHR-U could be translated into Mandarin Chinese for fans in Taiwan who are learning about American Football.  The process is underway with a translator, and all of us at MHR wish our friends in Taiwan the very best.  I would like to thank all of the members of MHR who take part in discussing the articles in the comments section.  Your comments and questions are what really makes the articles educational and fun.  Thanks to you, the reader, for making MHR such a great place and giving the stories a life of their own.  Our international family keeps growing and growing!