Tales from the SunnySide: David Bruton

Share All sharing options for: Tales from the SunnySide: David Bruton

When we glance through the summer's roster for the Denver Broncos, there is a palpable sensation that pulls at our thoughts; a pattern of character, respect and leadership that has influenced the way the team changed itself in the draft and in free agency. The powerful vehemence that Brian Dawkins exudes, the mature humility of Andra Davis, the intellect of Tom Brandstater, the maturity personified by Knowshon  Moreno; these men are perhaps the best-known among our newer acquisitions.

But since the first interview I saw with him, there has been something about David Bruton that has piqued my interest. Perhaps it's the implied contradiction between the manners of his his soft-spoken Midwestern drawl and the inherent violence, controlled as it may be, of his chosen profession. Perhaps it's the open way he talks of his love for his son Jaden, who will turn 4 on November 9, 2005. this year. The Broncos will be playing a Monday Night Football game against the Steelers . Whatever it might be, there is something about David Bruton that draws me to him - and to his story.

David Lee Bruton was born on July 23, 1987, in Winchester, KY, to Constance and David Lee Bruton, Senior. He is the older of two children and attended the Miamisburg Ohio High School, playing in the defensive secondary, snagging a few passes as a receiver and fielding a few kick returns.  While describing himself as a 'weakling' when he arrived in high school, Bruton would hit a growth spurt during and after his sophomore year that, along with increased time in the weight room, changed him. Bruton was close friends with Kelly Lewis, the son of the team's head coach. The Lewises gave him the encouragement that he needed to persevere in the sport of football.

"After freshman season, I wasn’t going to play football anymore," Bruton said. "Kelly talked me into coming back out. He said, ‘It’s your first year. It’s not the end of the world. You’re a good player. You’ll get a chance.’ He built my confidence up."

What changed? "It was the West Carrollton game his junior year," Coach Tim Lewis later said, "I was very frustrated, and David just happened to be close. I just remember going off and saying, ‘When are you going to do something?’He went out in the second half and just exploded. He took the game over. After that, he never went backwards."

He attended the Notre Dame football camp in the summer of 2004 and in 2005 he enrolled in their College of Arts and Letters, majoring in political science and sociology.

"It just felt like the right place for me," Bruton said. "My parents (David Sr. and Constance) loved Notre Dame and it was a lot closer to home than Wisconsin."

David started out as 'just' a special teams player, but he would start every game after his sophomore year. By his senior year he was a team captain and his leadership skills were on display. His physical skills took some time in developing, but his progress is plain to see. While still raw, he's extremely athletic and has the natural size and skills to develop into a solid NFL starter.

Bruton's scouting reports are rife with contradictions. This is a common issue among those young men who are talented enough to eventually draw interest from the NFL Draft - their years in college football change and mold them, professionally speaking. Those weaknesses that are evident in one season often diminish during the next. Bruton is no exception here - some of the things that are carried over on his reports from one year to the next don't seem as evident later in his collegiate career. Most of the things that were consistent are consistently good.

Bruton ended his senior year at ND as a team captain. He was their top gunner on special teams that year, having recorded 85 tackles, 5.5 tackles for loss and three interceptions. He was then asked to the Senior Bowl, where he performed well, and to Combine where he blew a lot of people away. He's a classic example of a player who has consistently improved throughout his career.

When Bruton was drafted, the point was made by coaches and pundits alike that he is an exemplary special teams player. That's hard to argue - Bruton logged 162 special team appearances in just 2005 alone and 596 over his four-year college career. Every scouting report I could find - and there were 10 of them - noted that he should be able to start right away as a gunner on special teams. He was the second-fastest safety in this year's draft, timed at 4.40 in the 40 on a year when times for the 40 were almost universally slower at every position (His three-run average was 4.46).

What is missing from his Combine numbers is the fact that Bruton has been timed on several occasions between 4.35 and 4.39 in the 40. Bruton comes by his speed naturally - his third cousin is Olympic sprinter Tyson Gay. While in other circumstances I would consider the Combine numbers more accurate, this year's Combine had players timed so consistently slower that there may be other factors involved. In any case, Bruton's speed on the field with pads is incontestable.

It's not just straight-line speed that sets David Bruton apart from the pack. Although he was usually categorized as a free safety during the draft, Bruton has the combination of speed, power, size and tackling skills to make a good-to-very-good starting strong safety in the NFL as well as a talented special teams player. Bruton's record tends to support that.

Some draft scouting reports indicated that, like Alphonso Smith, Bruton's skills are perhaps best-suited for zone pass coverage. He has struggled at times in man coverage, and many feel that his hips are slightly too stiff and he doesn't flip them well in transition. He bit on too many double moves to be a good cornerback, but that's okay - there aren't that many 6'2", 220 lb. cornerbacks in the NFL. ESPN's Draft Insider just said,

"Bruton would fit best on a team that plays a lot of zone coverage and asks its safeties to play a big role in run support."

However, I thought it interesting that New Era Scouting does see things a little differently. I got the impression that their information was predominantly from his senior year. They see him as a talented free safety with good man-coverage skills. Again - it helps to know what positives and what negatives are from what years.

When it comes to run support, Bruton is still a work in progress, but that can easily be overstated. He's still maturing as a player, and is learning to diagnose plays more quickly and to avoid letting his enthusiasm lead him into making mistakes. He usually wraps up well and his tackling technique received excellent reviews, although he has had to overcome a tendency to duck his head. While he still arm tackles at times, David Bruton is a hitter. His tendency to overthink was making him tentative as a younger player and led to a tendency to grab, but that diminished markedly as a senior.

I've mentioned before that it's easy to see David's progress as a player. Consider this chart of Bruton's four-year defensive statistics. Notice the obvious trends:

Bruton is also an unusually-talented leaper, having been measured with a 41.5" vertical leap which tied for 1st at the Combine. He also led all safeties by three inches with an eleven-foot broad jump, exhibiting explosive lower-body strength. When asked to cover a taller player in zone coverage, including a TE, Bruton has the skill set to manage it well. He probably shouldn't be exposed in man coverage or be placed on a superior wide receiver, but that is generally not his role in any case.

To get a good measure of the man, try glancing through these two interviews. Bruton comes across as a young man with good character, who sees his responsibilities clearly and speaks badly of no one. He is a man who adores his son, admires and appreciates Jaden's mother and clearly has a good head on his shoulders both on and off the field.

Just as happened to him in high school, there was a time when Bruton wondered whether playing college football was for him. When he arrived at Notre Dame, he was content to be a special teams player. That changed when his son, Jaden, was born on November 9, in 2005. In both high school and in college, it was his junior year that brought out the biggest changes in him.

Playing behind Chinedum Ndukwe and Tom Zbikowski as a sophomore, he wasn't sure he'd ever get on the field. He was struggling with school and he missed his son at home in Miamisburg, Ohio. He thought about returning home, going to community college and working to help support his son. His parents and teammates, though, persuaded him to stay at Notre Dame.

"I realized being here and being able to get a degree from here and possibly play in the NFL can do exponentially so much more for my son than what I would have been able to if I left," he said.

Notre Dame head coach Charlie Weis said when NFL scouts talked with him, inevitably Bruton was the first player they asked about. Bruton will be attractive to the Broncos because he is smart, he can play on all special teams, he's a good athlete, and more than anything, he's a driven man. Bruton said his son, who turns 4 on Sunday, has inspired him to be a better player. Said Bruton,

Bruton keeps a picture of his son in his locker, in his wallet and on the dashboard. He also has his son's name tattooed on his left shoulder. Bruton describes his son as being half of his motivation, while the other half comes from his personal faith. Before every game he taps his chest and his shoulder and points to the sky, his way of saying, "Thank you for my son and everything you've given me." That's the kind of player that can make his mark on a Broncos team that needs to start to win right away. When you understand his motivation, you begin to see why he's starting behind Brian Dawkins. In a few more years, David Bruton could be starting for Denver full time.

The hand injury to Dawkins, with its accompanying surgery, might be a blessing in disguise for Bruton and the Broncos. Dawkins may get through this season without further injury, but if he should miss some time, having Bruton used to playing a similar role on the team could prove crucial. For Bruton, it also means getting seen and noticed by fans and coaches alike.

It's worth mentioning that Bruton has no significant history of injury. This, too, is a difference between this draft class and many of years past - the players are generally leaders, team captains, and have little or no history of injury. Since even Dawkins will eventually feel the ravages of time, it's good to know that his backup tends to stay healthy.

With Josh Barrett, Darcel McBath and David Bruton learning the positions at safety, the Broncos should improve on both special teams and safety for years to come.

"He’s always thinking about how he’s going to make the next play," Notre Dame defensive coordinator Corwin Brown said. "He never backs down from a challenge."

That's our kind of guy. 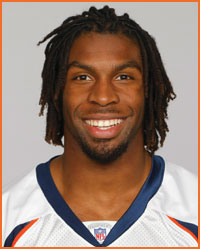