Share All sharing options for: MHR University - The 2009 Systems Begin to Take Shape 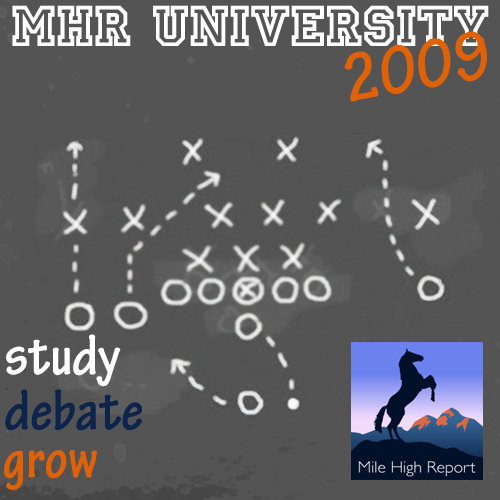 MHR University is meant to be a place to learn about the game of football.  A lot of fans who love the game can find their appreciation deepens when they know the minute tactics or overarching strategies behind a team's approach to the game.  Unfortunately, much of the football-reporting press avoids this teaching role.  They throw out terms or concepts that may make sense to the few fans who have played or coached football, and they completely ignore other areas.  Worse, they often put forth information that is misleading.  The situation becomes worse when we factor in that football terms can mean different things in different regions and levels of play (for example, HS versus college), and you can see why many fans just watch the QB and hope for a score or turnover.

As I've written in MHR-U in the past, my favorite aspect of the game in terms of analysis is systems.  With the strong caveat that no system is better than another (because the determining factor in a confrontation is who plays their system better), I think system analysis is perhaps the most under- and mis-reported aspect of the game.  For example, few fans outside of MHR realize that the Cover-2 systems are not formations, nor do they require 2 safeties in deep coverage.

Many fans learn tactics, or they knew tactics from playing football when they were younger - proper stance, gap assignments, formation names, plays, and so forth.  But the macro-level analysis (strategy) has always been on the shoulders of coaches.  Perhaps this is why the discussion of systems (or styles, if you prefer), gets left behind.

For me, there is a jump in game appreciation when one moves from tactics to strategy.  Tactics are the science of football.  Break down game film, and you can scrutinize how well a team tackles, or passes, or covers, etc.  But strategy (at least in football) is an art.  Watch the game as a clash between two styles, and it is less a thing to pick apart and more to behold.  For this reason, I would offer that there are three stages to watching football as a fan...

Stage One- You watch the game, knowing that you want your team to move the ball, and to stop the other guys.  This is the level which most fans are at.  The game of football is very popular, despite the fact that many fans don't know much beyond the basic rules of the game, and this is ok.  These fans may not appreciate football on a deep level, but they love the sport, their teams, and their players.  More power to them, because they are the ones who keep the sport moving.

When your team does something right, you jump off the couch and scream, "Go Broncos"!  In the background, you hear music like this.  You see games from the outside.

Stage Two- You watch the game and know most of the terms and techniques.  You likely played football when you were younger, and/or did some coaching.  Otherwise, perhaps you learned a little bit from places like MHR, or from friends, or even from playing around on a game like Madden.  (I'm not big on Madden as a sole source, but it has helped many people learn quite a bit about some aspects of the game).  You are an educated fan.  You might be a fantasy football player, you probably know the history of your team, and you might even watch a few replays here and there to break down what you have seen.  You are likely a hardcore fan of your team.

When your team does something right, you tell your buddy that you saw it coming a mile away.  In the background, you hear music like this.  You see the games from the inside.

Stage three - You don't see any plays being run; instead, you see them unfold.  You no longer see the game as just a clash of mere mortals on a field, but you see a divine guidance that comes from a higher power (the coach).  Where others see techniques, you see artistry.

With that out of the way, let's look at what we have so far on both sides of the ball.

Major, major congratulations to member SlowWhiteGuy, who predicted a 5-2 look all the way back in May.  I didn't see it coming, and he nailed it right on the head.  While our (so called) OLBs have some of the skill sets to play at OLB, they have been used in the first two games more as 5-2 defensive ends.  This makes the DEs on our rosters more like "defensive guards" (DGs).  I say "so called" because these guys aren't even LBs, they are DEs whom we are told are being moves to OLB.  They aren't!!!  In fact, I'll go out on a limb.

That's right folks.  While the formations will shift from time to time, the media types would be wrong to label this defense as a 3-4 .  At least in the first two preseason games, we have been a 5-2 team.  I didn't want to put this out there after our first game, but it seems more sure now.  If this keeps up, when the season starts we may have to refer to players like Elvis Dumervil as DE again, and refer to players like Ryan McBean as DG (Ronald Fields is still NT).  This leaves up with two "LBs" or "ILBs".  Either is correct.

I still don't have enough to go on regarding the system type we are playing.  I've been focused on tactics so far (looking for quality play from players), and feel the team is better.  But I'll be watching the game on more of a macro level at this point.  I'll be watching more closely to see what kind of assignments each player is getting.

Still much too early to guess which system we are running.  We are passing a lot, but that may be because we need to practice the passing game more than running right now.  Because we have a new QB, new coach, and a new system, we probably need to be running more pass plays for practice during preseason.  A few quick observations...

There are a lot of other things developing on the offense, but the use of RBs at WR or slot, and the sheer number of screens are easy to spot, and they don't strike me as pre-season "experiments".

The brain trust of MHR got this question in email, and I took the stab at it...

Have you guys noticed that Champ Bailey is getting beat?  Is this because he is learning a new system or is it something else?

I've noticed that he used to watch the QB a lot more to read plays and was quicker to switch to run support if needed.  But now he seems to focus on the WR.  While this sounds like a good idea (focus on your assignment), it may be a direction that he is receiving that keeps him from playing by instinct like he used to.  In other words, if he can watch the QB, start in "off" coverage, and adjust himself to the play like an expert, let him.  But if he is being coached to do something that isn't natural (for him), he might be playing a little awkwardly.
Notice how (in previous incarnations) Champ's helmet seems to move back and forth like a terminator just before and after the snap as he reads the play.  Now he seems to focus his attention only on the principal he's assigned to.
That may not be what is happening though, so take it with a large grain of salt.  For starters, I'm not focused on the DBs at this point, so I may be reading too much into what I've seen (in other words, I haven't seen enough).  It is possible that Champ is being practiced in a more disciplined style that just doesn't work for him, or that he is slowed down, or that he is adjusting to a new way of playing (less of his signature "off" coverage) and will be fine once the season starts and each player's adjustments compliments everyone else's.
Game one of the RS will be when I watch Champ a little more closely.  The PS sees so many vets being tried in new ways (when a new coach comes to town) that it is hard to gauge if the player is having true problems or is just being tried in new ways as kinks in a new system are tested.
On the other hand, I'm noticing a lot of other things (less "good and bad" and more "what we're trying to do), and I'll be writing a report on it shortly.  As it relates to Champ, the 5-2 look we're seeing seems to be an attempt to force the pass, which may be why the coaching staff wants Champ even more dedicated to his assignment.  Hence the new emphasis on bringing in elite and good DBs (two SAFs and a CB in the draft, plus Brian Dawkins, Renaldo Hill, and Andre' Goodman).  We're now demanding that the front seven stop runs on their own, leaving the DBs in pass dedicated duties, which is an improvement.  Just like Kyle Orton needs to settle down and realize that he has an OL to protect him and a running game to fall back on, Bailey may need to either realize that he only needs to focus on one thing now, OR he needs to get to his coaches that he needs to play a more natural style (for him - watching the play unfold and reacting as HE sees fit).
All in all, I think it is still too early to draw conclusions.  We're still in the PS "try out new things" phase and not the RS "win ball games" phase, so it can be hard to tell how much is a player's problem or how much is just a PS testing thing.  Keep an eye on Bailey, and see if anything changes in the next two games.  If not, game one RS should be a good time to make a strong pronouncement.  With the CBs (unlike some other positions), we should know what we have as early as the end of the first regular season game.
Soli Broncos Gloria, Sola MHR.