Now I know when I do these posts that many of these guys are not truly forgotten, but there is a method to my madness.  I am obsessed with the Ring of Fame right now and my goal is to profile every single Ring of Fame member; culminating with a page dedicated to the entire Ring of Fame.  This project is well into its second year and my hope is to have it completed by next reloading season.

So for now, you will have to endure another biography of a less than forgotten Bronco great.  Haven Moses.

When Lionel Taylor left the team in the late 60's, there appeared to be a void at a position that could only be filled when Floyd Little rolled out into the flat to catch the ball and make great plays for an otherwise horrible offensive team.  Drafted in he first round by the Buffalo Bills in 1968, Moses would end up in Denver midway through the 1972 season and play there until his retirement in 1981. 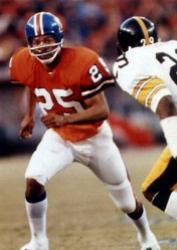 After a humble childhood, in which his family stressed an education over athletics, Haven Moses met the challenges of getting an education while fostering his love of sports. He played football, baseball and basketball throughout his high school days which he thought would end upon graduation. However, he was offered a scholarship to play football at a small community college where he was noticed by the larger universities fairly quickly.

USC tried to get him into their program, but Don Coryell, John Madden, and Joe Gibbs whisked him away to the less prestigious San Diego State University where he would take part in a radical new offensive program that would come to dominate the NFL to this day - in an evolved way of course.

Moses was eventually taken 9th overall in the 1968 draft by the AFL Buffalo Bills. He languished in Buffalo trying to catch passes from subpar quarterbacking and things went sour quickly after Bills Head Coach Jack Kemp retired and Lou Saban return to Buffalo in 1972. The two butted heads and after Moses resisted Saban's insistence on him wearing a two-bar face masked helmet over his usual single bar, the falling out occured. Moses was traded to the Broncos midway through the 1972 season.

Though he enjoyed catching balls from Charley Johnson, he soon found himself back the similar situation of having to catch passes from mediocre quarterbacks. That all changed when Craig Morton came to town. Moses would become an interegral part of an offense built to manage the game by controlling the ball and holding back on turning it over. The Orange Crush defense would take care of the rest.

Haven Moses would finish his fine career in 1981 and remembered as a great Broncos pass catcher. Not only that, he was a great role model and an inspiration for young people. One thing that does stand out to me regarding his career(and perhaps he can mentor Brandon Marshall on this one) was how often Moses found the end zone. He finished his career with 49 touchdown receptions, which was good for one touchdown per 7.48 catches. That is an incredible ratio, considering that if he had somehow managed 100 catches in a season, he would have had around 13 or 14 touchdowns on the season. By contrast, in the past two seasons, Brandon Marshall has averaged one touchdown every 17 or so catches.

Haven would end up going to two Pro Bowls and was the key factor that enabled the Broncos to stretch opposing defenses downfield. The only other player I can think of that did the sort of things Haven did was Lynn Swann. The difference being the toughness of Moses to go over the middle and his ability to fight for the ball in traffic. He truly made the most of every pass sent in his direction. For all these reasons and many more, Haven Moses was inducted into the Denver Broncos Ring of Fame in 1988.

*NOTE* I discovered this recent article from the Denver Post, which was taken straight out of Terry Frei's book about the 1977 Broncos. I found it to be a fascinating read and I look forward to receiving my copy of that book soon.

I attached this video of Super Bowl XII highlights as its shows some nice plays(along with some not so nice). Either way, having been born later that year(1978) I crave any and all video from that era, so I felt compelled to share it. Enjoy!