Since I first did my post Some Clarification is in Order: Steady Backs versus Burst Backs I have been keeping up to date with each of the players runs, and I wanted to keep presenting that data every couple of weeks.

A quick reminder of how this table works:

So I collected data from these backs, the abbreviation in () is what is on the table:

On the table, I include average YPC, Total Runs, then the runs are broken up into groups by by yardage, as well as the percentage each group makes up of the total runs. I then take their average, form a zone of +/- 2 YPC. For example, if a person averages 4 YPC, their average zone would be 2-6. I do this to see how often then reach this zone which is close to their average. This zone is used to see how often a back stays close to their average, and to separate backs into two types of rushers I set boundaries. When a back reaches majority of their rushes, more then 50% in their average zone, they are a "steady back", those who have less then 40% are considered "burst backs," those who get their average by balancing poor runs with big runs. Those with 40%-50% are "balanced backs."

The first table is a key. It includes the ranges for each class of backs, a color code to identify what class of back each one is. Also included on this table will be a tally of those who either lead the good categories, in yellow, or are last in good categories. It is also vice versa, those who have a lower percentage of runs for less then one yard category for example would also get a yellow. I took the top two and bottom two of each area. So for example LaDainian Tomlinson, his 24% of runs in his zone is the second worst among those studied, so he gets a red, but his 13% of runs for 11-20 yards is the leader, so he gets a yellow. Each groups total are listed in the first table. 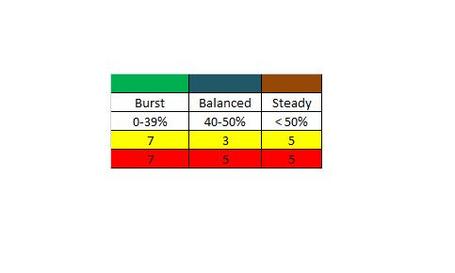 - Thomas Jones wins the award for best percentage of runs being in zone with 67%. Adrian Peterson has the worst with 23%.
- If you want to lose yards, use a guy like Chris Johnson, one if every four runs is for less then a yard.
- You want to get 3-5 yards a play, use a "steady back," almost half of their runs are in that range.
- Frank Gore and Thomas Jones lead the group for runs of three to five yards with 40% and 43% respectively. Chris Johnson and Adrian Peterson did very poorly here.
- It appears that "burst backs" have a high percentage in the 8-10, 11-20, and 20+ categories, but will almost always struggle to get positive yardage on their other runs.
- Foster is the exception, he has shown he can break it big, but he also is quick regular with keeping his runs our of the negative yardage with 63% of his runs for over 3 yards and 86% of his runs for positive yardage.
- Backs who appear to be overrated, or at least not living up to their name, include Steven Jackson, Chris Johnson, and Adrian Peterson.
- I have found the teams that run the ball the best, Chiefs for example, have one of both. Actually the Chiefs possible have the best of both extremes, Jones is the picture of an every down back, who will get you 3 or more every down, and Charles is a great change of pace back who can break it big regularly.
- "Steady backs" usually have a lower YPC, but they are much more likely to get their average then a "burst back" would.

As the season goes on, what other running back should I follow?