A Look At the Tim Tebow "Swamp" Playcalling Package: Part 1

Share All sharing options for: A Look At the Tim Tebow "Swamp" Playcalling Package: Part 1

Twelve times in eight games the Broncos have unveiled a special set of formations meant to unleash a Tebow on unsuspecting opponents.  At their root, these plays are all designed to do one thing, and that is to solve the riddle of how to involve one of the Bronco's fiercest competitors and top talents into an offense that is at times slow to get going, fast to finish, but always managed by Kyle Orton.

The trick has been in isolating situations where, frankly, Orton isn't particularly needed.  Now, this is not to say that Orton could not do things successfully in these situations, but that the Broncos have overarching team goals that go beyond one or two players, goals like sustaining a consistent and credible threat to rush the ball.  So if the Broncos find themselves in situations where running the ball is the best course of action, then, by my analysis, they will find themselves in a situation where the "Swamp" package may be called for.

After the jump I provide a look at the first of 12 different "Swamp" plays that have been run so far this season, the situation that each play is called in and a quick look at the effectiveness/productiveness of the call.  I went into the analysis with the assumption that the Broncos, over the course of the season, had been developing the "Swamp" with the goal of having Tebow pass out of it.  I came away from the analysis with the opposite impression.

When it comes to the "swamp," it is ALL about the run. 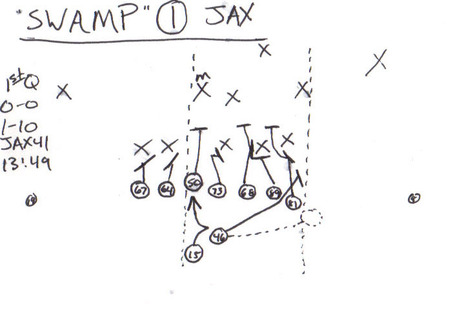 The Broncos would run two pure "swamp" calls in the Jags game, and another which called for Tebow to be flared out at WR.  Throughout the rest of the season, nothing resembling this 15Flanker formation is even hinted at, which could lead to two conclusions:  A)The Broncos felt that it was ultimately a poor use of Tebow, and scrapped it B)They have a much longer term plan that could call for its later implementation.  My guess is the former.

Of the two pure packages they ran, they both have a couple of characteristics in common.  They were run on 1st down early in the quarter, around midfield.  Both formations were running formations, with 2 wide (one of which was Orton), though Tebow took the snap in the shotgun in both situations.

In the first play, labelled (1) above, a strongside running formation is presented with an unbalanced line to the right.  Of note is that Orton's defender is cheated in to defend the run, and the defense is set up and gapped for a strong run defending presence favoring the strongside, with 5 DL.  Upon reading this, Larsen is called in motion to the backfield from his spot at the end of the line, which tightens the SS in even more, but still favoring a strongside run.

At the snap, Tebow has two reads to make on the play, involving the safety and the MLB.  Larsen charges to the gap between the 2 TEs on the strongside, where he puts a finishing block on the DE that Quinn chips on his way to the second level.  Meanwhile Walton releases from the snap directly to the 2nd level to meet the Mike.  Tebow can follow either block, and in this case he makes a strong step towards Larsen's block, setting the defensive flow in that direction, and then burst forward behind Walton's block up the middle.

Unfortunately the Jaguars called for the LBs to stunt on the play, a great defensive call.  The result is that the WLB ends up taking on Walton, while the MLB is freed up to fill the lane.  At the same time, Stanley Daniels fails to execute his hook block properly, and the DT getsan arm on Tebow, slowing him down, where the MLB cleans up. 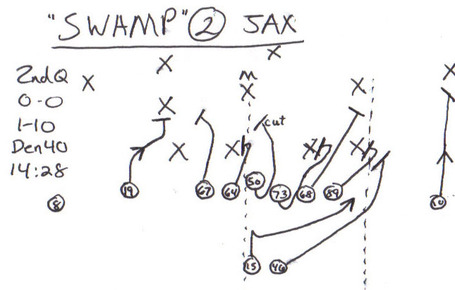 Later in the 2nd quarter, around midfield again, on a running down with the score still tied at zero, Denver lines up in nearly the same formation, but with Royal in the slot, and Larsen lined up beside Tebow in the backfield.  The Jaguars maintain a very similar defense, keeping in base personnel, though the SLB backs off the line and the WLB moves out to cover Royal.  Unlike the previous play, where JAX favored the strongside (but balanced this with the LB stunt), the JAGs are spread out pretty evenly, with no clear holes.  Denver is running the play from the left hash, and have the strongside setup to the wider half of the field.

The lineman blocking is very interesting here.  In the previous play they all manblock relatively straight ahead, with the guards hooking (or trying to at leat) their guys.  Here, the left side of the line (batiste, Daniels) both man block straight ahead, while the right side zone blocks, "flowing" to the right.  both Walton and Kuper take a short backwards step to get position to hook block their defenders, with Walton moving tot he 2nd level to once again take the Mike.  This zone call is an adjustment for possible stunts, since it gives the lineman a chance to read his block and pick up the right guy.  Walton does this with an effective cutblock on the Mike.  Just like in the previous play, Larsen blocks off of Graham's outside shoulder, though in this formation Graham is the outside TE.  Tebow can once again read either block, and takes a strong step forward, selling the run up the middle before sprinting out to get behind Larsen's block on the outside.

Unfortunately, though Larsen picks up his block on the outside, Graham fails to completely hook Derrick Harvey on the end and Harvey's penetration forces Tebow to cut back up inside where he gets bogged down.  Either run looked ok on the read, so the play failure came down to one missed block.

Two plays isn't much of a sample really, but as early as it was in the season, it was clear that Denver was taking no chances with its Tebow packages, though both designs were intelligent and were solid running plays even against base run defenses.  They forced JAX to counter with a more balanced run defense, though the lack of production didn't help to soften up the JAX pass defense at all.

By running the plays early in the half, around midfield, with a 0-0 score, on 1st down, the Broncos were essentially substituting them for running plays, where Orton wouldn't have been doing anything except handing off anyways.  Though there were receivers in routes, neither play was designed to allow for a pass, as the receivers sold their routes only over the first five or so steps, before trying to get into and seal off their defenders.

Over the following weeks, Tebow would be inactive vs. SEA, TEN and BAL, and vs. IND, though he was active and probably had plays designed for the game, Denver was never in the clear, safe running situations that they had favored vs. JAX, failing to cross their own 30 yard line before IND managed a ten point lead.

Tebow wouldn't see the field again until the JETS game, coming to the line is a funky pistol variation of the "swamp."  When we look at that tomorrow, we will see more corroboration of the "safe" situations that Denver insists on in order to feel comfortable running Tebow onto the field, though two other elements are added to the attack that expand both the possibilities, and the damage that can be done out of the "swamp."