Last-Minute Tickets? The Market Is Still There

Share All sharing options for: Last-Minute Tickets? The Market Is Still There

Broncos tickets are still a hot draw, even in 'down times'. The tickets are even harder to come by when it's a team like the Chiefs coming to town.

Take a look below at the graphic provided by TiqIQ, MileHighReport's ticket partner. The average price for a ticket to Sunday's game in the 2nd hand ticket market is $128. Compare that with the listed average - $76.75 - and you'll see that people are still paying, and paying a premium to go to games. 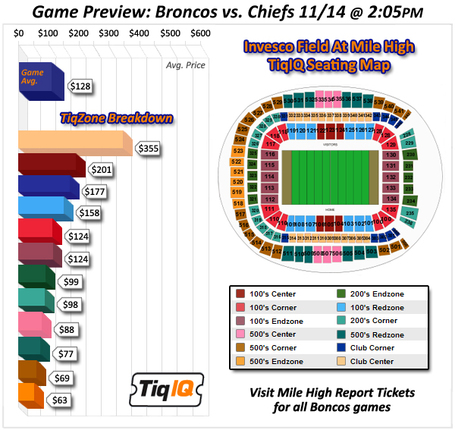 That's what made Brandon Lloyd's comments the other day about the fans so impressive to me. He gets it. Whether you believe in booing or not, paying all that money to go see the Broncos play does give a fan some rights on how they react to what they are seeing. Lloyd said as much:

I think the Broncos fans have been getting a lot of flack for the way they have treated the team this year, but I think they are justified for their position.

Because when we show up to that stadium, it's not empty, it's sold out. They are giving us an opportunity to perform. It would be different if it was halfway full to start the game. Then it would be like, "Oh, the people here aren't supporting us, they aren't cheering or us." But they are showing up for us, so as players we need to perform and give them something to cheer about give them something to be excited about. So I don't blame the fans at all.