Share All sharing options for: Upon Further Review 2010 - Broncos vs. Chargers - Week 17

The Denver Broncos will entertain division rival San Diego Chargers in the season finale this Sunday. The Broncos have a 4-11 record and are assured a Top 5 selection in the 2011 Draft. They will be trying to build on Rookie quarterback Tim Tebow's first win and finish a horrible season on a high note by starting the new year with a victory. The Chargers are 8-7 and occupy 2nd place in the AFC West. A 34-20 loss to the Bengals last week brought their four year playoff run to an end. Now they can only fight to keep their record over the .500 mark.

The game is scheduled for Sunday January 2, 2011 at Invesco Field at Mile High @ 2:15 PM MST. CBS is airing the TV Broadcast. Don Criqui will call the play-by-play and Steve Beuerlein will be the color man. For the Broadcast Map, please visit here.
The weather forecast for the game calls for:

Here is the latest look at the ticket situation for Sunday's Game.  For more information, click on the graphic or head to the MHR Ticket Center! 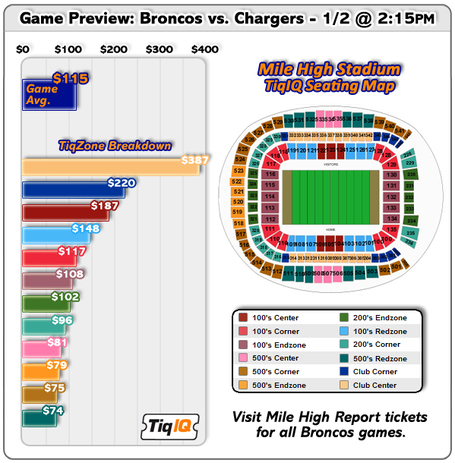 RB Mike Tolbert sprained his neck and shoulder on a scary hit last weekend, was stiff and sore Monday. He had an MRI and there’s no long-term damage but he won't be playing against Denver. RB Curtis Brinkley was promoted from the practice squad to take Tolbert's place for Sunday's game.

TE Antonio Gates (toe, foot) was placed on Injured Reserve. Randy McMichael will start in his place. The Chargers promoted FB Billy Latsko from the Practice Squad to take Gates' place on the Active roster.

WR Patrick Crayton (wrist) had a setback this week minimizing his chances to play Sunday. He had a 105-yard receiving performance against the Broncos in their last meeting.

WR Malcom Floyd (hamstring) will play this week even though he might not be 100%.

ILB Stephen Cooper (knee) will be out this week as he continues to battle his injury. Brandon Siler will fill in for Cooper. He did so last week as well, and he had a pretty good game with six tackles, including one for a loss.

OL Scott Mruczkowski (ankle) didn't practice but he should be available for a backup role Sunday.

FB Jacob Hester (knee) didn't practice but it's believed he can go Sunday.

OLB Antwan Applewhite (ankle) was limited in practice and will likely be a game time decision.

OLB Larry English (foot) continues to miss practice and he could be out Sunday. He came back last week after missing the previous game, but didn't record a tackle.

It should be noted that Coach Norv Turner stressed that if someone is available, they will play.

The Chargers have had one Field Goal and four Punts blocked. They have given up three Returns for TD's, had lousy snaps on FG attempts and the return game has been sub par.

San Diego's Kicker is Nate Kaeding. He is 19 for 23 (82.6%) with 1 block and a long of 50 yards. He has made all 37 of his Extra point attempts. His Kickoffs land around the 8-yard line. He has 2 Touchbacks and 1 failed Onside Kick attempt. Chargers opponents have returned 60 of his Kicks an average of 21.0 yards and 2 have been returned for Touchdowns.

Mike Scifres is the Holder on Field Goal situations and takes care of the Punting duties. 4 of his punts have been blocked and one has gone for a touchdown. He has a 46.9 yard average, but a net of 30.4 yards, good for 35th in the NFL. Of his 48 Punts, 7 have gone for touchbacks, 7 have been Fair Caught and 12 have been placed Inside the 20. The Coverage crew has allowed an average of 18.9 yards per Punt Return.

Darren Sproles remains the No. 1 kick returner, but he is sharing punt-return duties with CB Antoine Cason. Darren has 48 Kick Returns for an average of 24.3 yards, a long of 45 and 1 Fumble. He also has 24 Punt Returns for a 6.9 yard average. 11 have been Fair Catches and his longest PR was 16 yards. Antoine Cason has 11 punt returns for a 12.4 average, 4 fair catches and a long of 42 yards. Cason has returned punts for three consecutive games.


SINCE THEIR WEEK 11 match up against the Broncos, the Chargers have had mixed results, going 3-2. A far cry from last year's 13-3 record, their 8-7 mark in 2010 can be attributed to a better level of talent in the AFC West.

The Chargers'  WEEK 12 opponent was against the Colts at Lucas Oil Stadium. ILB Kevin Burnett returned an interception 29 yards for a TD, FS Eric Weddle returned another INT 41 yards for a touchdown and Mike Tolbert ran one in from the 3-yard line to stun the Colts 36-21. Nate Kaeding made field goals of 28, 33, 50, 30 and 20-yards. Vincent Jackson returned from his holdout and subsequent team imposed suspension. He pulled a calf muscle just two plays in and was done for the  game.

They returned to Qualcomm in WEEK 13 for a rematch with division rival Oakland Raiders. Two Nate Kaeding field goals and a TD catch by Antonio Gates weren't nearly enough as the Chargers fell to Oakland 28-13. Jason Campbell ran 9 yards for a touchdown, passed for another and the Raiders pulled out to an early lead and never looked back. Michael Bush and Darren McFadden each ran for 7-yard TD's.

WEEK 14 brought a visit from another division rival, the Kansas City Chiefs. The Chargers took immediate control of the game and shut out the Chiefs 31-0. Philip Rivers threw two TD passes to WR Malcolm Floyd. Mike Tolbert ran for an 8-yard score and Ryan Mathews added a 15-yard TD run. The San Diego defense held Brodie Croyle to 40 yards passing and Jamaal Charles to 40 yards rushing and the Chargers evened their record at 6-6.

The Chargers got to play a third consecutive game at home in WEEK 15. The 49ers came to town and left after a 34-7 beating. Vincent Jackson made a career-high three touchdown catches, his first of the season and the Chargers held San Francisco scoreless for 55 minutes on a Thursday night. The Niners were 2/12 - 16% on 3rd down and had a mere 61 net yards rushing and 131 net yards passing. Nate Kaeding had field goals of 25 and 39 yards and Mike Tolbert rushed for a score. The 49ers made their points on Brian Westbrook's 1-yard TD run. With the win, San Diego improved to 8-6 and held hopes for a playoff berth.

LAST WEEK the Chargers traveled to Cincinnati for a game with the Bengals. They were hoping for a third straight win and a shot at the playoffs, but the Bengals wouldn't cooperate and the Chargers left Paul Brown Stadium with a 34-20 loss.
Carson Palmer passed for 4 touchdowns. Jerome Simpson had 6 receptions, 124 yards and 2 of those touchdowns as the Bengals led the entire game. Dhani Jones and Reggie Nelson crunched Mike Tolbert on a first-quarter carry and the running back had to be carted off the field with a neck and shoulder injury. Simpson blew past unprepared cornerback Antoine Cason to haul in a 59-yard touchdown pass from Carson Palmer as the Bengals pulled away in the fourth quarter. Bernard Scott finished the Bengals scoring on a 10 yard run. The Chargers tried to come back after QB Philip Rivers made a 5-yard TD pass to WR Kelley Washington, but the Bengals defense prevented any more scoring chances.

With the loss, the Chargers fell to 8–7. With Kansas City winning earlier in the day, the loss prevented the Chargers from making their sixth playoff appearance in seven years.

San Diego defeated Denver 32-3 in their last meeting in the Mile High city and currently have a 2 game win streak over the Broncos by virtue of their 35-14 victory in Week 11. The Bolt's are 7-2 in their last nine games against Denver.

THE BOTTOM LINE
With Mike Tolbert out, Ryan Mathews will get a heavy workload and despite Antonio Gates' absence, Randy McMichael is a decent substitute. WR Kelley Washington was targeted six times last week and had a season-high five catches, including a touchdown. Malcom Floyd will play and Vincent Jackson is back as well so don't sell the Bolt's short. They still have the #2 Offense and the #1 Defense.

The San Diego secondary was torched for four touchdowns last week against the Bengals and you can bet Tim Tebow and Brandon Lloyd have seen that tape. Those were rookie receivers too, not T.O. and Ochocinco. The Chargers pass rush, was shutout in the sack department last week and Carson Palmer is no Tebow. Injuries to their pass rushing LB's may allow Tim Tebow to win his second game.

The Broncos need a win in the finale to carry momentum into the off-season.

"It is all about having confidence going into the off-season and having a good feeling about the guys that were out there on the field."

Not to mention winning the final regular season game against a division rival.

This game may be meaningless to some, but don't tell that to Tim Tebow.