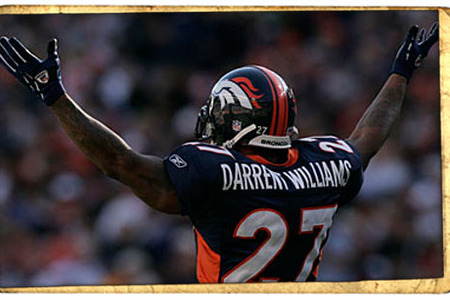 Gone, but never, ever forgotten!

END_OF_DOCUMENT_TOKEN_TO_BE_REPLACED

The cycle of time rolls on, whether it is the NFL or life in general. On days and nights like this day, and this night, however, we often stop, albeit for just a moment, to think back - to the prior year and further - before we take the time to look ahead.

For Broncos fans, New Years Eve will always hold a somber meaning - even if we take the time to celebrate the life that was Darrent Williams.

It was four years ago tonight when Williams was gunned down as his Hummer Limo drove away from a nightclub where the Broncos, and several other athletes, were celebrating the New Year, and Williams' record label, RYNO Records. You can read all about that night - and the events that followed - by checking out the Section on MHR dedicated to it.

The Broncos had lost earlier that day, to the San Francisco 49ers, in a game that would have put the Broncos into the playoffs had they won. They did not, and Williams had been the focus of criticism for his play, in that game and in games prior that season (a certain game against the Colts comes to mind). While fans were trying to decipher what went wrong in a season that started with so much promise, a man, a son, a father, lost his life in a senseless way.

In a lot of ways the Broncos, and us fans, have never been the same and never will be. Scars like that, and those caused by the death of RB Damien Nash a couple months later, don't heal quickly.

This post isn't meant to bring anyone down. Darrent wouldn't want that. He would have a big smile on his face and would want you to celebrate the things in life there are to celebrate - family, friends, and of course, the Broncos.

So as you head out tonight, be safe, and tip a glass of whatever you are drinking to the heavens and think of D-Will. Somewhere he is smiling down.

No matter what happens on Sundays - whether the Broncos win or lose - remember that it is, after all, just a game.