Share All sharing options for: MHR University - FB programs versus Singleback Programs (and a shocking conclusion) 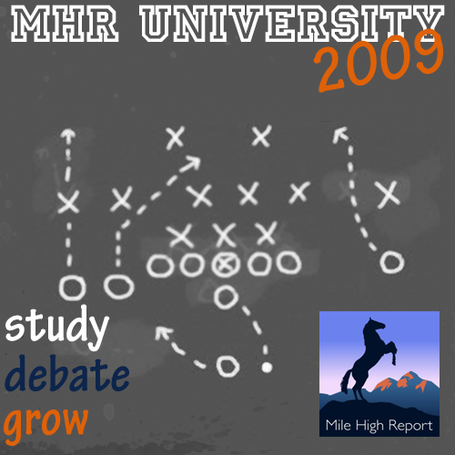 The Broncos have signaled a hard move to the singleback forms, following in the footsteps of the Patriots.  (The Patriots, in fact, prefer to not use the term "FB", instead classifying all backs as RBs).  In the Super Bowl this Sunday, fans will see one of the more committed single-back teams going - the Indianapolis Colts.

What is the difference between the two approaches (besides the obvious), and is one better?  Let's take a deeper look after the jump below...

The advantages to having a FB -

The advantages to having a single-back approach -

Since no team can "do it all", teams will specialize in approaching the game in certain manners.  With financial considerations for what a team can and can't do, teams have decided to make specialization decisions all the way down to formation preferences, including the decision to keep a FB, or to go after another TE.

For better or worse, the trend is away from the FB.  Dating back as far as the 1970's, football thinkers have theorized that one of the game of football's next major progression would be to drop the FB position, and to adopt multiple TE sets.  At the end of this march of ideas comes the theory that football will make a radical shift to 3 TE sets.  In short, teams will line up with very powerful running looks, but have the option to pass to many TEs in the formation.  If the defense brings in lighter CBs, the offense runs.  If the defense brings in LBs, the offense passes.  Imagine formations from the early 20thcentury, but with the forward pass in effect.  It is a nightmare scenario for defensive coordinators.

We've seen glimpses of these 3 TE sets from the Steelers, the Patriots, and even the Broncos.  The Broncos (it should be noted) were experimenting with 3 TE sets even before the arrival of Josh McDaniels and his Patriot-centric programs.

But stepping back from the teams that have made more progressive strides towards the 3 TE, we can see that much success has been with teams that have commited heavily to the single-back philosophy.  Two of the more dominant teams in the last decade have been the Patriots and the Colts.

One may argue that the Colts and the Patriots have an advantage entirely separate from the FB / single-back debate; they each have excellent QBs.  Fair enough.  But isn't it interesting that coaches have decided to protect those QBs with an extra TE instead of a FB?

One may also argue that the domination of the Colts or Patriots isn't absolute.  That argument is harder to make.  While the Colts have only won one SB in recent history (and have the potential to win a second this weekend), they are clearly one of the best teams in the NFL.  Both the Colts and the Patriots are assumed to be deep playoff teams at the start of any year.

Receiving versus Blocking TEs - The Trend

Perhaps the toughest decision a team makes when they move away from the FB position is to determine what type of TEs they want to have (blocking or receiving).  Denver has two extremes on the same team, and many are guessing that one of those two is on the way out.  It isn't the blocking TE either.

But for teams moving away from the FB position, it is actually blocking TEsthat have come to the fore.  With enough scheming and deception, a blocking guy like Graham can still get out there and catch the ball on several plays.  But if a player can't block, no amount of scheming will make him a better blocker.  For this reason, teams can make the prudent move to save money by not investing in a receiving TE, and instead going with a little more versatility by getting a blocking TE.

Part of this may stem from the current shift to the 3-4, which often features blitzes wider than what a standard OL wants to handle.  The traditional counter to the 3-4 (on passing downs) is to place 2 TEs in the formation.  Now, if a blitz comes on the outside, the OL doesn't have to open up the center to counter the wide blitz.

But let's take a deeper and more ominous look at what has happened recently in the NFL in terms of trends.

And Now, The SHOCKING Conclusion!

Readers of MHR have noticed the latest trends in the 3-4.  Instead of the traditional 3-4 look, many 3-4 teams have started with their OLBs on the line of scrimmage.  Since defensive formations are defined by where a player lines up (and not by a particular player's stance), we have seen that the modern version of the 3-4 isn't a 3-4 at all, but a 5-2.  This has been the subject of much discussion at MHR, and (in my opinion), the readers of MHR are well ahead of the "media curve" on what the modern 3-4 really is.  In fact, one of the top DEs in football (Elvis Dumervil) is still called a LB, even though his entire background is as a DE, and he continue to line up at scrimmage.  There is really nothing "LB" about him at all.

But this is nothing new to the readers of MHR.  We've long known that the modern 3-4 (as run by several teams) is really a 5-2.  It may come as a shock to others, but not us.

Has anyone noticed that the arrival of the 5-2 coincides with the departure of the FB position?  In other words, while offenses are moving towards 2 TE sets, defenses are slowly moving towards 5-2 looks?  Coincidence?  Surely not.

With the extra guys on the line for single back offenses, defenses have shifted the 3-4 to bring the OLBs to the line, making them (effectively and by definition) DEs.  Defenses in the modern 3-4 are deploying a NT, two defensive guards (an old term from another era), and two DEs.

For football theorists, this is an amazing find.  Not only does the 3 TE storm draw closer, but we're seeing an early shift by defensive coordinators to counter it before it arrives.  Stepping back from the Xs and Os of football for a moment, and looking at where we are in football history, this is an exciting time to be following football theory.

We are in the early stages of a new game (or more correctly, a return to ancient American football).  We now have 7 man fronts on offense facing 5 man fronts on defense in many games.  How often do you hear that getting reported though?  Sports reporters may not notice it, and coaches aren't going to go out and correct the press (as the press seldom gets it right in reporting).  But see for yourself - 2 TE sets versus 3-4s (but with the OLBs at scrimmage).  And in the case of those TEs, they are predominantly blockers who can catch a little better than most OLmen.  It looks like 7 on 5 to me.

We're even closer to the "Magic 3" systems than we were when I wrote about the coming 3 TE based systems (not just formations) just a few short years ago.

"Listen! And understand. The Magic 3 is coming!  It's out there! It can't be bargained with, can't be reasoned with! It doesn't feel pity or remorse or fear, and it absolutely will not stop. EVER! Until you are dead!"  Defensive Coordinator Kyle Reese