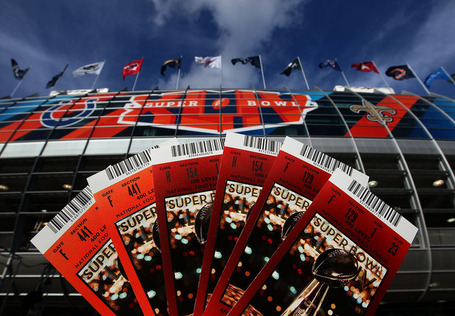 The time has come! One team is looking to cement themselves as the best team of the past decade. The other is trying to complete the revival of a city - for a day at least. The Colts and Saints were the best teams in football during the regular season, they were the #1 Seeds in the playoffs, and today, they will face off to decide who will be the World Champions of Professional Football.

READ BELOW FOR CONTEST DETAILS!

You can talk about the game here, of course, and can also head on over to SBNation.com, where we are putting together the biggest on-line Super Bowl Party in HISTORY! Fans of all teams, from all the different sports, will be coming together to talk about the Super Bowl. You can access the SBNation open thread by clicking on the graphic below -

Now, if you are looking for some good reading before the game, check out Big Blue Shoe's sit-down with SI's Peter King. It's a solid read and BBS did a great job speaking with King about a wide array of topics, including sports blogs. You can read it here -

Part I: http://www.stampedeblue.com/2010/2/5/1296896/stampede-blue-has-a-beer-with
Part II: http://www.stampedeblue.com/2010/2/5/1297717/stampede-blue-has-a-beer-with
Shoe also had the chance to talk with Former Broncos TE Shannon Sharpe. He has sent me the transcript of that conversation and I hope to have it posted later today.

CONTEST
You have until kick-off to pick the following -
The Winner
The Score
MVP
Whoever guesses it right(entries are on a first-come/first served basis) will receive a MHR T-Shirt and a $25 gift card to NFL SHOP, compliments of me. It's the least I can do.

Talk about the game, talk about the commercials, and be sure to make a solid impression over at the SBNation Open Thread. Show them that MHR is the best community here at SBN and that Broncos Fans are the classiest group around!
Want to get the local flavor? Check out Stampede Blue for the Colts, Canal Street Chronicles for the Saints
Oh yea, almost forgot. I'll take the Saints tonight. I'm a sucker for a good story, and with all the hell the city of New Orleans has been through, combined with the Manning Connection, even James Cameron would have a hard time beating it.