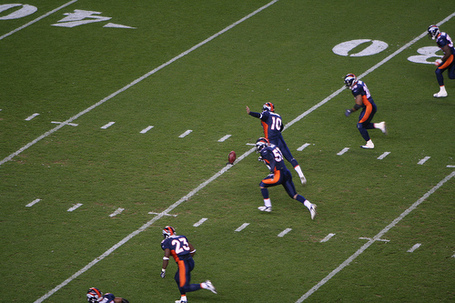 Kickoff coverage is a vital part of a team's quest to control field position in a football game. When you pin an opponent deep in his own territory, you dictate his offensive options. If your opponent is forced to start possession inside his own 20 yard line, his chances of scoring greatly diminish. Of course, it helps immensely if you have a stud defense, but that is another story. This is the unit that helps the defense by making the distance it takes to score as far as possible for the opposing offense.

For the cover team to have positive results, each man must carry out his assignment. Successful kickoff coverage is a team effort. Intense effort and desire are also part of a successful kickoff team.

Each player must stay in his assigned lane as he locates the ball. They can adjust their lanes relative to the ball as long as they don't over pursue. A player that starts right of the ball needs to stay right of the ball, keeping the ball on the proper shoulder. A player who finds an opening closes it, squeezing to the ball relative to the teammate to his inside. Players should always tackle the ball carrier's outside leg. This helps to keep containment, while an error or missed tackle directs the return man towards a ready teammate. 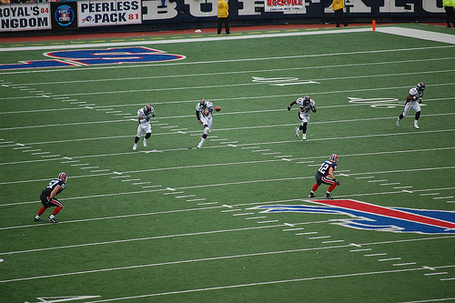 Hitting the 30 yard line at a full sprint is a key to kickoff coverage. If the unit can coordinate their getoff, they will avoid vertical gaps in the coverage. The goal is to hold the opponents return average to less than 18 yards, tackling the returner inside the 20. If the kick has a hang time of 4.0 seconds, the cover team should be at the 35 yard line when the ball is caught. The shorter the kick, the more hang time the ball needs to have, especially if the kick is not a touchback.

L1: lines up 5 yards from the sideline.

L2: lines up on the numbers.

L3: is split between the numbers and the Hash Mark.

L4: lines up on the Hash Mark.

L5: lines up 5 yards inside the Hash Mark.

The right side positions mirror those on the left. 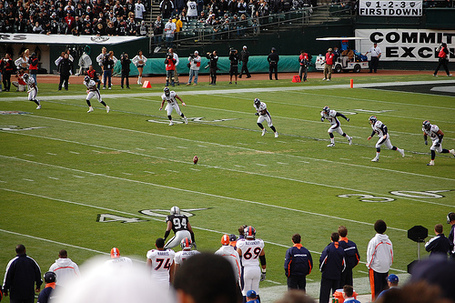 The #1 position player must be able to run. He will be an aggressive safety. A Defensive Back or Wide Receiver is best suited for this position. He doesn't have to be huge, but must be a sure tackler.

The #2 position player must be able to run well enough to squeeze blocks and be aggressive enough to take on kick-out blocks. A strong safety or a big physical receiver is ideal for this spot.

The #3 position player must be big enough to take on double teams and wedge blocks. A Defensive Back, a fast Linebacker, or a Fullback will have the typical metrics to fit this role.

The #4 and #5 position players need to have good bulk and strength. They are the closest players to the kicker and the point of attack, so they must be stout enough to take on blocks and not get knocked out of their lanes. Linebackers and Tight Ends have the right size for these positions.


Their are 3 Kickoff Coverage Zones: the All-Out Zone, the Avoid Zone, and the Attack Zone.


Proper kickoff coverage starts with the Getoff and ends with preventing a long return. The kicker needs to approach the ball consistently, so the coverage team can time their approach for the Getoff. By the time they hit the Line of Scrimmage, the players should be at a full sprint. This is the All-Out Zone. It starts from the Line Of Scrimmage and goes to the opposite 35 yard line.

From the 35 to the 20 is the Avoid Zone. In this Zone, players cross the face of their assigned blockers, avoiding them with a hard turn and quickly returning to their lanes. Lane distribution is key to this part of the kick coverage. The horizontal gaps between players should be 5 to 6 yards wide and need to stay constant. Players that are too close or too far apart leave seams that are too big to be filled. If a player gets knocked out of his lane, he must work hard to return to that lane. Players should never follow a teammate down the field. The trailing player must adjust to fill in the void. They must not allow the front blockers to force them to break down their coverage too soon. The drops of the front blockers will tell a lot about the direction of the return.

When covering kicks, collisions are good---when your team is the one creating them. The players on the coverage unit should be taught to attack potential blockers. Approaching a blocker in the Avoid Zone, the player should try to get by him as quickly as possible. He can shoulder rip by the blocker, swim over him, put a move on him, or use a two-hand shiver. He must set up the blocker and run at him; trying to force the blocker to set his feet. When the blocker has his feet set, he has committed his ground. The player gives the blocker a two-handed punch and gets back in his coverage lane.

When the coverage reaches the 20 yard line, they are in the Attack Zone. At this point, the players should break down their lane and squeeze to the returner. They should attack the block, being careful not to pick an edge. Staying square to the ball and reestablishing the Line Of Scrimmage. If the blockers on the return unit don't try to block, the coverage player swivels his head to watch out for the kick-out or crack back block. In the Attack Zone, the players use the Butt and Press. At this point, if he can engage the blocker before the blocker plants his feet, he has the advantage because of his momentum.
When taking on a blocker 10 yards or closer to the ball, the player forces him back towards the returner, squeezing him to the football. The player must not break down his lane coverage unless he is within 10 yards of the ball. A player facing a wedge must never trade one for one. He needs to take out at least two blockers with him. He fills the proper gap when taking on the wedge and stays high--this is a golden rule of coverage. A player facing a double team holds his lane responsibility. If he gets knocked down, he comes up running. He must be relentless in the pursuit of the return man.

There are 3 ways to defeat the blocker; Cross his Face, avoid him and make a hard turn, and the Butt and Press. Crossing the Face of the blocker is achieved by using the Swim move. The avoid and turn happens when the cover player speeds past the blocker and makes a hard 90 degree turn towards the ball carrier. These first two are used in the Avoid Zone. The Butt and Press is used in the Attack Zone where the blocker can't be avoided. It basically involves driving the blocker backwards toward the returner.

Every player on the coverage unit should get to the far 30 yard line before adjusting lanes, unless they are engaged by a blocker. The #4 and #5 players must attack through the gaps using their outside shoulder. They should force the returners hand and guard against a return up the middle. It is imperative that they don't get single-blocked.

The #3 players penetrate through the outside shoulder of the blocker. They use their inside shoulder pad to pinch the ball carrier, preventing him from getting to the outside.

The #2 players role is to contain. They always take on blocks with their inside shoulder. That way they can slide to the outside and hold their containment responsibility easier. They should squeeze the return. If they can beat the wedge outside to get to the ball carrier, they are to go for the tackle.

The #1 players act as an aggressive safety. He keeps all blocks to the inside. He is a contain player when the ball is coming toward him and a fold player(holding cutback containment) when the ball is going away from them.

The kicker is a safety. He covers to the 40 yard line and settles down. He forces the ball back to the center of the field. The kicker is responsible for ensuring there are 11 players on the field and calling the signal for the kicking scheme. And when a holder is used for the kickoff, the kicker should direct the kick from the middle of the field away from the holder's side because it will be difficult for the holder to fill back into his lane responsibility.

Now I know some of you will be asking, "How did the Broncos stack up in this area last season?"

To shed some light on the Broncos kick coverage unit, first we need to look at Matt Prater. My sources are profootballfocus.com and NFL.com. Prater kicked off 77 times in 2009, and 28 of those went for touchbacks. His kicks averaged 1.4 yards deep into the endzone and he had a maximum Hang Time of 4.77 seconds. 64.9% of his kickoffs were returned and the average starting position of the opposing team was the 23.7 yard line. According to profootballfocus.com, Prater had the best kickoff rating in the league. He tied for 1st with Michael Koenen of the Falcons on touchbacks, and just behind him on average opponent starting position. He only trailed Shane Lechler of the Raiders in average kickoff distance, and was 5th in Maximum Hang Time. Thus we have further proof that Prater needs to stay a Bronco.
The Broncos kick coverage unit gave up an average of 22.8 yards per kick return last season. That was ranked 15th in the league, so there is room to improve on that front. To put that into perspective, the Oakland Raiders gave up an average of 25.7 yards per kick return (last), and the Cleveland Browns gave up an average of 18.9 yards to lead the league.

And if the Broncos sign FA ILB Marques Murrell, he would help out on the ST's. Marques had 5 ST Tackles and 1 Assist for the Jets last season. This shows that the McX team is trying to improve this area of our team as well.

An improved kick coverage unit would be a valuable asset for the Broncos this year. 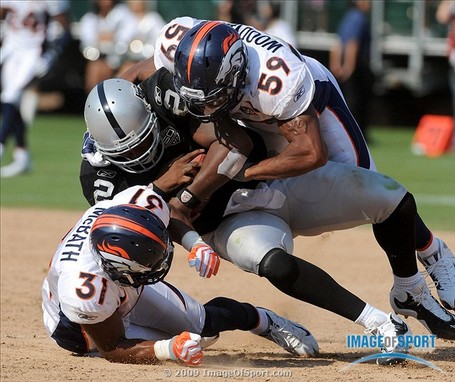