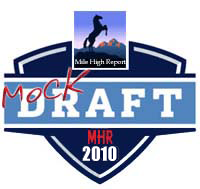 Hey folks.  Crazy day yesterday, huh?  The Denver Broncos went in a completely different direction than I thought they would.  Prior to the Draft I wasn't sure how I'd feel about Tim Tebow being a Bronco, but I found myself cheering the pick as soon as it was made.  I suppose I will trust my gut and see how this story plays out!

I'll start off by saying I'd like to see a guy like Vladimir Ducasse going to the Broncos at #45, but I also see a glut of quality cornerbacks in the top half of round two, so I think I will go with a corner instead.

Also, I think the Broncos package a second rounder next year and one of our third rounders to move up to snatch Matt Tennant or J.D. Walton before either goes off the board.

With the last pick, I hope its Brandon Spikes, but McD did work out a bunch of running backs with late second, early third round grades so its anybody's guess!