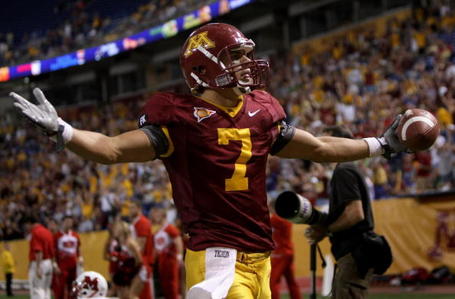 Yet another potential weakness turned into a strength

So far in the 2010 NFL Draft, the Denver Broncos have invested multiple picks in the interior offensive line and, now, the wide receiver position.  Another commonality: size.  The Broncos are getting bigger everywhere, adding dynamic players that fit the McDaniel's bill: tough, smart, physical and versatile leaders.  At 6'3" and 217 pounds, Eric Decker is a big man, but he's more than that.  He has great hands, spectacular ball skills, polished route-running and very good blocking.  He's so versatile, he's been drafted twice by Major League Baseball teams!  He's another team-first leader brought into the fold in this draft.  He's more of a possession guy than Demaryius Thomas, so they should compliment each other and resident star WR Eddie Royal quite well.