The Changing Face of the League (Part 1)

Share All sharing options for: The Changing Face of the League (Part 1)

"We learn more by looking for the answer to a question and not finding it than we do from learning the answer itself." -- Lloyd Alexander.

I've been hearing the following three statements a lot lately: (1)Defense wins championships.  (2)The NFL is becoming a passing league.  (3)You have to have a passer who can average 300 yards a game if you want to win.  I recently heard all three of these (with slightly different wording) from a long-time friend as we were talking about football.  At one point he proudly said: "Well, Brian, you know as Bear Bryant once said, 'Offense wins games, defense wins championships."  My response?  "Really?  Bear Bryant said that?"  I had my doubts about that, as well as some questions about the other three common statements.

Some reflections after the jump

I want to start by reassuring all of you that this post will not (hopefully) take on the encyclopedic nature of my two most recent posts (so, please breath a sigh of relief and don't be afraid to read on).  I'm going to take a very brief look at two of the statements mentioned above, and then spend the rest of our time together on the first of a series of posts about the third.

One of the most often misquoted statements about football is "Offense wins games, defense wins championships."  This quote is usually attributed to Bear Bryant of Alabama.  In fact, the quote originated with Dave Thorson, the head basketball coach for DeLaSalle High School in Minneapolis, MN, who said, "No doubt -- offense sells the tickets, but defense wins the championships."  In a later post in this series, we'll take a look at the claim that defenses win championships.

Another quote I often hear is that a team must have a quarterback who can average 300 yards a game in order to win and be competitive.  Back in 2005, when Jake Plummer was Denver's starting quarterback, Greg Garber -- an ESPN staff writer -- wrote an article on 5 great myths of football.  One of them was "A 300 yard passer usually wins."  His response was basically "Bull" (though he said it much nicer than that).  He pointed out that passers who passed for more than 300 yards won only 46% of the time.  He pointed out four quarterbacks who -- in the same weekend in 2005 all threw for over 300 yards, completed 59% of their passes, yet only mustered 6 touchdowns between the four of them, and all lost.  By contrast he pointed out that Jake Plummer had only one 300 yard game on the way to leading Denver to a 13-3 record.

The thing I'd really like to focus upon in this, and a couple of follow up posts is the notion that the NFL is becoming a "passing" league.  I think there is some merit to that claim, but I'm not sure if that is the entire story.  So, what I'd like to do with this post is look at the team passing yardage since the beginning of the Super Bowl Era in 1966. This gives us 43 seasons of data to examine. 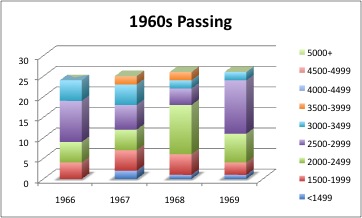 We can see some fluctuation in these four years, but by and large the majority of the teams fell in the 2000-2999 yard range for each season.  It was interesting to note that the largest single group at the start of the period was the 2500-2999 range, then passing production dropped off slightly before resurging in 1969.

The 1970s saw the merger of the AFL and the NFL.  They also saw the creation of the Seattle Seahawks and the Tampa Bay Buccaneers in 1976.  How many of you realized that Tampa Bay was in the AFC West with the Broncos in 1976, then switched with the Seahawks in 1977? 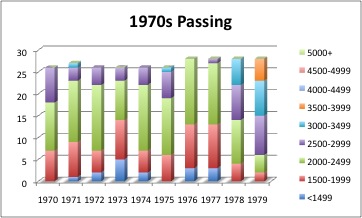 The overwhelming majority of teams in this decade produced between 2000 and 2499 yards each season.  This represents something of a downward shift from the 1960s.  Towards the end of the decade, however, we can see the beginnings of an upward trend as more teams began to fall into the 2500-2999 and 3000-3499 ranges.

The 1980s was a strange decade.  It was a period marred by two strikes.  In 1982, a 57-day player strike shortened the season to 9 games.  In 1987, a 24-day player hold-out caused the cancellation of all of the week 3 games, and the games in weeks 4-6 were played by replacement players with 85% of the veterans refusing to cross the picket lines.  This decade also saw the Baltimore Colts franchise move to Indianapolis (1984). 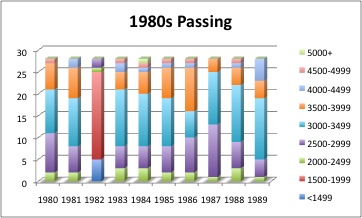 The 1990s were another decade of change.  The league added the Carolina Panthers and the Jacksonville Jaguars in 1995.  The Cleveland Browns moved to Baltimore in 1996 to become the Baltimore Ravens.  The following year, the Houston Oilers moved to Nashville to become the Tennessee Titans.  The Cleveland Browns were then recreated as a franchise in 1999. 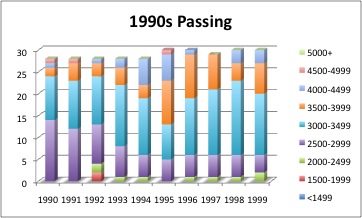 We can see that the 1990s were largely a repeat of the 1980s with the majority of teams falling in the 3000-3499 range throughout most of the decade.  There was a slight surge in the middle of the decade as a large number of teams crested the 3500 yard mark.  A very few made it into the 4000+ ranges.

The most notable thing about the 2000s was the reestablishment of a franchise in Houston in 2002. 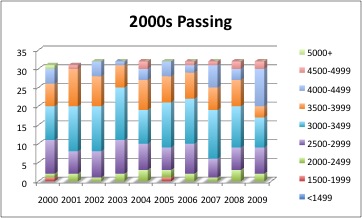 What Does This Suggest?

Is this slow but steady rise an indication that the teams are shift away from running the ball to a more pass oriented offense, or could it be that there is simply a greater emphasis on offense overall?

In part 2 of this series, we will look at the team rushing production during the same time period to see if we can find an answer to this question.