The Changing Face of the League (Part 2)

Share All sharing options for: The Changing Face of the League (Part 2)

"We learn more by looking for the answer to a question and not finding it than we do from learning the answer itself." -- Lloyd Alexander.

In Part 1 of this series, I took a look at the statement that the NFL is becoming a passing league.  What we found was that from 1966 (the year of the first Super Bowl) to 2009, there was a general rise among the majority of teams in the passing yards produced each season.  In the 1960s, the majority of the teams produced between 2500 and 2999 passing yards.  By the 2000s, that number had risen to between 3500 and 3999 passing yards.  While each year had ebbs and flows to where teams fell along the spectrum, 2009 saw a dramatic increase in passing production.  In 2009, we saw 23 teams throw for 3000 yards or more.  Of those 23, 15 threw for 3500 or more yards.  12 out of those 15 surpassed 4000 passing yards, and 2 of those threw for over 4500 yards.  It remains to be seen if 2009 represents a new offensive trend in the NFL, or if was simply an aberrant spike in the productivity.  At the end of Part 1, I posed the following question:

Is this slow but steady rise an indication that the teams are shift away from running the ball to a more pass oriented offense, or could it be that there is simply a greater emphasis on offense overall?

A quick reminder that this study has been arbitrarily restricted to the years 1966-2009 -- The Super Bowl Era.  The goal was to see how the offensive production had changed during this time period.  It is helpful to remember that although we have lumped the teams all together, the period of 1966-69 was during the time that the AFL and the NFL existed as separate entities.

We can see from this graphic that the overwhelming majority of the teams fell into the 1500-1999 rushing yardage range.

The 1970's were the early years of the AFL-NFL merger which gave us the AFC versus the NFC in the Super Bowl.

The early part of this decade saw the majority of the teams continue to fall into the 1500-1999 yard range.  However, in the final 2 years of the 70s, we can see how teams became more effective at running the ball as the majority were now found in the 2000-2499 yard range.

Please remember that 1982 and 1987 were strike years, with 1982 playing a drastically shortened season and 1987 having 1 less game along with 3 games played by replacement players.

The 1980s were an interesting decade for the running attack.  With the exception of the two strike years, the teams were fairly evenly balanced with the majority falling in either the 1500-1999 range, or the 2000-2499 range.

The 1990s were perhaps the most stable year for the rushing game, with next to no variation in the production of the teams.

The most recent decade was more or less simply a repeat of the 1990s.

Once again the overwhelming majority of the teams fell into the 1500-1999 range.  That number remained steady, even in 2009 which saw a tremendous surge in the passing game production.

A Preliminary Summary?
I'm calling this portion of the article a preliminary summary because there are most certainly factors that have affected this data.

It must be recognized that there were teams on either extreme of the middle ground figures listed above.  Each season there were a few teams that were well above the average range, and a handful that were significantly below it.  What is interesting to note is how the rushing "middle ground" for the majority of the league has consistently fallen in the 1500-1999 yard range, while the middle ground for passing has risen from 2500-2999 yards in the late 1960s to 3000-3499 yards in the 2000s.
A number of explanations have been advanced to account for this shift.  Some people have raised the question of the expansion of both the number of teams and the number of games.  While those have their impact, I'm not at all certain that they would sufficed to explain the shift.
A second explanation relates to the quote highlighted in Part 1: "No doubt -- offense sells the tickets, but defense wins the championships."  I don't believe anyone object to the assertion that the NFL has a strong focus on selling tickets -- as well as generating revenue through cable and TV deals, merchandising etc.  Certainly some of the focus of the league has been on increasing the excitement of the game by increasing the amount of the offense.  Part of the approach to accomplishing this can be found in the rule changes that have benefited the passing game.  Below is a partial list of those rule changes:
Perhaps the most likely, and logically consistent explanation was shared by Emmett Smith in Part 1 of this series, where Doc stated:

Prior to about 1966 the ration of run to pass was around run-60% and pass-40%. At this time, you gained more net yards per play, on average, by running, due to the diminishing effect on total passing yards that comes with INTs. But, continual changes in the passing game did bring up overall YPP over the intervening decades.

One of them, of course, was the work of Sid Gillman that led to the innovations of Bill Walsh. Unlike his friend on contemporary Don Coryell, Walsh refused to accept the problems created by interceptions, and his risk-phobic additions to the passing game still influence pro ball today. Many factors played in, perhaps none more heavily than the rules changing the meaning of offensive holding and those governing the amount of contact permitted by the defender on potential receivers. Over a thirty year period, the tendency moved from run-0dominant to pass dominant. I don’t the the exact numbers in my head, but a detailed discussion of this issue is found in the book The Blind Side.

There is an excellent article that looks at the run-to-pass ratio at advancedfnlstats.com: Run-Pass Balance--A Historical Analysis, by Brian Burke.  Burke looks at the trends from 1940 to 2009. He looks at the yards per play from rushes compared to passes and the rushing plays vs the passing plays per game. 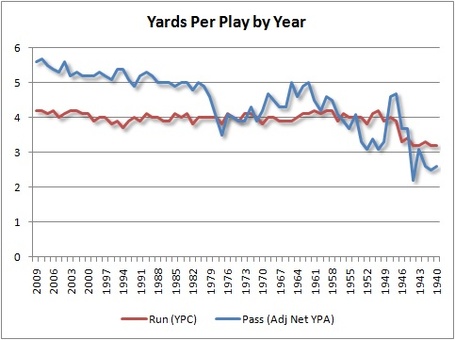 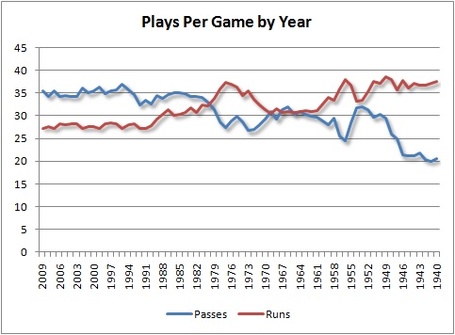 Burkes' research clearly shows that while the yards per rush had a minimal increase over the years, yards per pass has jumped dramatically -- particularly beginning in 1978.  Burke also demonstrates -- as Emmett mentioned above -- the rushing plays per game game and the passing plays per game have reversed prevalence.  Thus we seem to have a situation in which:

With this emphasis on offense, and on passing in particular, the next question quickly becomes:
"Does the truism 'Defense Wins Championships" still hold true?"