Denver Broncos vs. Seattle Seahawks: Keys to Victory for Denver

Share All sharing options for: Denver Broncos vs. Seattle Seahawks: Keys to Victory for Denver 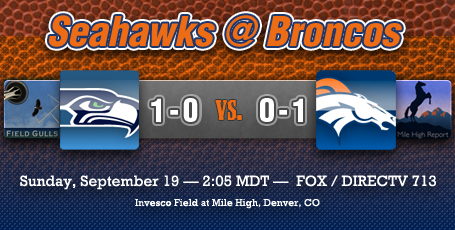 With a new coach, and a load of roster changes, the Denver Broncos caught the NFL by storm in 2009 by starting the season 6-0. The Seattle Seahawks are looking to do much of the same in 2010 with Pete Carroll at the helm.

In week one, the Seahawks absolutely dominated the San Francisco 49ers, shutting down their running game and forcing two turnovers. Inversely, the Broncos' defense was average at best, and they barely forced one quarterback sack let alone forced any turnovers.

"A lot of people didn't give us a chance, much less a chance to have a win," receiver Mike Williams said. "But we've been saying all along, people don't know what we're doing here. People don't know what we put in during the week, how we prepare and how much it means to us. We're going to take this game and move on." (Associated Press)

The Seahawks absolutely stunned me with their week one performance, mainly the way they were able to shut Frank Gore down when they allowed a mere 38 yards on 17 carries.

Needless to say, a game that we all pegged as a "gimmie" on the Broncos' schedule before the season has been given a violent shove into the must-win category.

The Broncos looked extremely rusty in their season opener against Jacksonville, who essentially dictated the game with their special teams play. Such an overlooked aspect of the game truly was a huge reason the Broncos lost.

What is at least somewhat encouraging for Broncos fans is that despite how poorly the team played last Sunday, they still only lost by a touchdown and had a very good chance of tying the game on their final drive before a Kyle Orton interception ended things for good.

The Broncos have a banged up offensive line, but as a whole are returning to health. They are going to need all hands on deck as they approach what appears to be the toughest part of their schedule starting in week three against the Indianapolis Colts, and it wouldn't hurt to go into that game fresh off of a "W."

Denver has won 10 straight home openers, the longest streak in the NFL. If they are going to increase that streak to 11 games, here is what they need to do on Sunday afternoon.

1. Efficiency on 3rd Down

I really can't stress this point enough. The Seahawks proved to be extremely tough against the 49ers on third down last week, allowing only one conversion out of 15 attempts by San Francisco. That could be just as much a negative toward San Francisco as anything else, but it's still an unbelievable number to consider. If the Broncos are going to beat Seattle, they need to not only convert on third downs, but they need to get off the field on a more frequent basis.

This might be difficult given our injuries up front. It would be smart of Josh McDaniels to call more passing plays on third downs than running plays, but if we insist on running the ball, we are most successful and consistent going to the outside of our tight ends, who are both phenomenal blockers. We have struggled mightily over the last couple of years running on the inside, and I would love to see the Broncos run more halfback screen plays to get our linemen out in space and let Knowshon Moreno make plays. Those seemed to be quite effective in the pre-season.

Defensively, the Broncos need to get off the field on third downs. How do they do that? Put pressure on Matt Hasselbeck, and in effect, smash him into the turf. Tyler Polumbus is starting at left tackle for the Seahawks, and we all know how well that project turned out. Even without Dumervil, we should be able to get four, maybe five sacks.

If we can't apply pressure on Sunday, it could be a long season.

One thing I absolutely hate watching is a promising drive result in zero points. It's undoubedly one of the hardest things to watch as a fan, and it seems to happen too often to the Denver Brocos. Perhaps this one goes hand in hand with converting on third downs, but we need to convert long drives into touchdowns.

That might seem obvious, sure, but it's something we certainly have had struggles with in particular as a team since McDaniels was hired, and even before that with Cutler's crew. Red zone deficiency has been a problem of this team for too long now, and this defense is not going to let anything come easy.

I think Kyle Orton is a huge part of this. Orton led the NFL last week with five passes of 25 yards or more, two of which included runs by the receivers. While many knock Orton for his arm strength, he clearly has the ability to sling the ball down the field, and we have the right personnel to do it on a regular basis. Even with a mediocre offensive line performance, I remember Orton slinging the ball down the field probably 10 times last week. A few plays were very close to being catches, but you see the improvement in confidence both in Orton as well as coach McDaniels' confidence in Orton to make plays.

Now that our offense has the ability to be more dynamic, it's critical that Orton and the Broncos finish drives and put points on the board. I look at it like runners left on base in baseball. If you have a drive get to the 30, it's like loading the bases in baseball. At worst, you should come away with one run, which in this analogy is going to be a field goal. Obviously, you want to clear the bases, or at least score two runs. Good teams do this on a regular basis. Average teams either get the field goal or they get nothing. Right now, the Broncos to me are in the category of average, but they have more than enough potential and talent to be good, if not great. I want to see that potential on Sunday.

Our defense simply didn't seem aggressive last week. No doubt there is risk involved the more aggressive a team is, but David Garrard had all day to knit a sweater and then pick a receiver to throw to. I mean, how else does Champ Bailey get beat downfield by Mike Thomas? Not that Bailey is immortal, but he just doesn't blow coverage like that.

We need to apply more pressure and force the Seahawks to beat us downfield with quick decisions. Matt Hasselbeck is not the quarterback he once was, but he certainly isn't a slouch either. He can be a good quarterback when healthy, and as of last week, he is back to old form, even running for a touchdown.

Our defense needs to force a turnover early. I don't want a garbage time interception or something like that. I'm talking about a sack/fumble, a pick--something along those lines, and early on in the game. The Broncos won six games to start the season last year, and they did it with timely sacks, turnovers, and obviously a little bit of luck.

That aggression wore down significantly as the season progressed, and the team suffered drastically because of it. If you can't force turnovers in this league, you are just not going to be a good team. It's as simple as that.

That was a pathetic output last week against the Jaguars. I don't know that Darcel McBath would have made a load of difference, but perhaps he does. Either way, and NFL special teams unit should be able to tackle someone inside the 20 when they return the ball from seven or eight yards deep in the end zone. The Broncos were flat out embarrassed in the return game, and as a fan I actually feared everytime they kicked the ball.

Not only that, but our own return game was pathetic, too. We were simply out-coached and out-played in this area of the game, and that cannot continue.

This unit was one of the bright spots in the pre-season and all of a sudden it's taken a 180 degree turn in the wrong direction. Players were not keeping to their gaps, and the Jaguars' return man was simply able to run the other way for a huge gain. That needs to improve immediately, because the Broncos played far better defense when the Jags had a long field to conquer. When we gifted them with a short field, they capitalized almost every time.

The Seahawks are an NFL team, and they will do the same if we cannot win the field position battle, or at least keep it close to even.

Perhaps this was even more embarrassing than our special teams play. Under no circumstances should a single player have two facemask penalties in a row. There were some who questioned whether McBean should be on the team after those two plays.

Also, there is no circumstance in which a quarterback should have two delay of game penalties in a game. I suppose if his headset went out, and there was severe confusion, then there would be an excuse. But for it to happen twice is un-called for, and quite frankly boils my blood a tad.

Discipline. If there's one thing I know this team teaches, it's discipline. You see guys at training camp running laps for false start penalties. To have four penalties of this magnitude shows rust, yes, but also a bit of bone-headedness.

Our players are better than that. All McBean had to do was fall on Jones-Drew on the first facemask, and it would have been a tackle for loss. Either way, the penalties need to decrease. I realize there are going to be hiccups with young players on the offensive line, but eliminate the penalties by Orton and McBean, and that is a totally different game.

If I'm coach McDaniels, I'm making these guys run extra for any mistakes in practice this past week. It needs to become embedded in their brains that mental mistakes simply will not be tolerated.

I think you will see improvements this week.

These are the top five keys to victory for Sunday's game in my opinion. If the Broncos fail in half of these, I feel another loss is in the horizon. If we are able to correct three out of five of these mistakes from last week, there's not a doubt in my mind that we will continue on our sport-wide best home record.

The Broncos need this win to gain some steam heading into games against Indianaplolis, Tennessee, Baltimore, and the New York Jets. It's still only week two, but this is game could be a huge momentum shifter for the Broncos this season.