Broncos' Running Game Should Get Back on Track Against Colts

Share All sharing options for: Broncos' Running Game Should Get Back on Track Against Colts 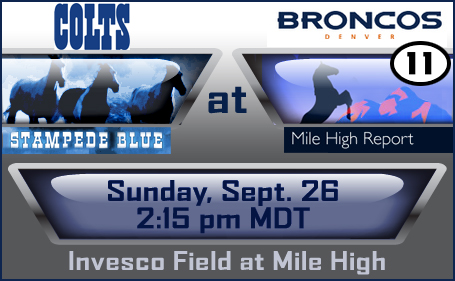 For years, Denver Broncos fans got used to Mike Shanahan, Gary Kubiak, and the zone blocking scheme, and for years it was a great success.  The Broncos could seemingly plug in any average Joe to their system, and they would be one of the NFL's top running teams.

The culture of this team has changed, and understandably so.  Josh McDaniels has implemented an offense that has made its mark in the NFL through numerous top tier passing attacks. Not unlike Shanahan's successful running game, Josh McDaniels made a franchise player out of Matt Cassel of all people, and now has Kyle Orton on track for a potentially huge season.

Despite the fact that the Broncos are a good passing team this year (and they are very, very good), it doesn't excuse the fact that they are running the ball very, very poorly in 2010.  Last week, the Broncos couldn't even put together three yards per carry between their top two running backs, and so far this season are better than only five teams in overall rushing, averaging a very pedestrian 77 yards per game.

If the Broncos have any plans of making the playoffs this season, that number is simply unacceptable.  Even the league's best passing teams have at least a timely rushing attack.  Take a look at this week's opponent, the Indianapolis Colts.  Peyton Manning is obviously the focal point of that offensive attack, and it works.  But when the Colts need to close out a game, they know that they can turn to Joseph Addai, Donald Brown, and the running game to get the job done.

Obviously, the Broncos have not shown consistency on the ground this season. How can they improve in this facet of the game?  This week's test at Indianapolis is providing plenty of new outlets for the Broncos to gain some ground, if you will.

1.  The Return of the Right Side

By this, I obviously mean the return of Chris Kuper and Ryan Harris, the team's starting right guard and right tackle respectively.  The loss of these two players has been very noticeable over the first two games.  Not as much in pass protection, which has been very good for the most part, but this piece isn't dissecting the passing game.

Take a look at Colby'sbreakdown of Knowshon Moreno's runs from the Seattle game.  The Broncos don't seem to have any cohesiveness on the front line, and that is somewhat understandable.  Compared to the 2009 unit, this team has only one of the same starters, and that is Ryan Clady.

The return of Kuper and Harris is huge, because it will allow the Broncos to put Zane Beadles back on his more natural left side.  He has excelled in pass rush, but definitely has been struggling to adjust to run blocking from the right side, not having practiced at the position hardly at all this season.  He is a much more natural fit as a left guard for this system.

Harris and Kuper returning doesn't automatically equate to newfound success, but they are far more talented than the guys the Broncos are putting out there right now, so the news today that they are practicing is a fine surprise for Broncos fans.

This was a very underrated trade in my opinion.  Laurence Maroney had a very up and down year in 2009, but he wasn't bad by any means, and returned from a serious shoulder injury to have a career high in rushing touchdowns.

I say up and down, because along with the career high in TD's, Maroney also had a career high three fumbles, all of which were lost.  Still, that only makes five fumbles in his entire career, so it's not like this guy is a chronic fumbler.  He brings the Broncos some fresh legs out of the backfield, and is an immediate talent upgrade over any back on the roster not named Knowshon.

He will come in and run hard, and he also packs a punch in the passing game.  Maroney doesn't have blazing speed, but he makes the most of what he has when he's given space. He could be an asset on third downs.

Where the Broncos really need Maroney to contribute is on 3rd and four or less.  Those are the plays when they need to be able to depend on the running back to get the tough yardage, and hopefully the return of their linemen plus the running of Maroney/Moreno can add that.

Maroney also gives the Broncos plenty of options out of the backfield.  While Buckhalter has been less than impressive this season, he can still play.  The Broncos now have a very solid trio in the backfield, possibly even a quartet...

I don't think Andre Brown is going to come in and take the world by storm, but he is a very talented back.  The Broncos pulled him off the practice squad for a reason, and that reason was not because of the inability of any of their other backs.

Brown might not get a ton of chances to contribute, but he is definitely added depth and an upgrade over Lance Ball.  The Patriot scheme utilized multiple different backs, keeping the others fresh.  If the Broncos are going to utilize a running back by committee approach, they have four guys that I really like for what they are trying to do.

Again, it's not that Brown is going to come in right away and have an impact, but take a look at the Broncos' depth chart at running back now as opposed to the start of the season.  Moreno and Buckhalter are obviously still there, but you replace Lance Ball and Bruce Hall with Andre Brown and Laurence Maroney. Not bad maneuvering by our front office.

If the Broncos cannot get roughly 130 yards on the ground this weekend, they are in trouble.  Those numbers are a combination of the averages from both teams.  I might even give the Broncos a little bit of breathing room here, and shoot for 120 yards rushing on Sunday.

But that is 120 yards or bust, and 43 more than they are averaging right now.  That isn't a ridiculous goal for this team, and they should be able to achieve it against this defense if they don't have to throw the entire game, which probably means they are losing.

If the Broncos can't have an effective game against the league's worst run defense through two games, there is reason to worry.

The Broncos are going to need to run the ball if they are going to beat the Colts on Sunday.  Controlling the clock agaisnt Peyton Manning is absolutely critical, and even dominating the time of possession battle isn't a 100 percent success rate.  There are multiple different things working in their favor in that regard, so they should be able to get something generated. Perhaps Knowshon Moreno is in line for his first career 100 yard game this weekend.  If that's the case, it's likely the Broncos did pretty well for themselves against the Colts.