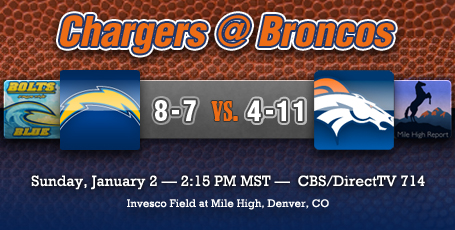 The Broncos and Chargers are both playing for little more than pride - and possibly their jobs today at Invesco Field.  For Tim Tebow it is a last opportunity to impress incoming VP John Elway and whomever the new Head Coach is.  Tebow has played well under the pressure and that has me excited.

In other news, Champ Bailey may have played his final game as a Denver Bronco.  He is inactive today against the Chargers.

For everything that is anything regarding the Chargers, check out BFTB

REMEMBER - Follow MHR on Twitter for up-to-the-second thoughts on the game as well as everything going on with the Broncos and NFL.

Be sure to JOIN the new home of MHR RADIO!