I don't know who the head coach of the Denver Broncos is going to be. I don't know what kind of defense this team is going to run. I don't know if there is going to be football until October.
But I do know that the Broncos need an influx of talent, and mainly on the defensive side of the ball. This is not a secret by any means, and Brian Xanders has mentioned that defense will be a heavy emphasis this offseason.
The Broncos are still missing the third piece to their three-headed front office monster, but that will likely be worked out by the time I make my next mock draft.
Since the season finished, the Broncos' draft order has been almost completely set, save for their two picks in the later rounds. Right now, the Broncos have the 2nd, 36th, 46th, and 67th picks in the draft, as well as two sixth round choices. The first four picks can all be high impact players, being that even the third round pick is like an extended second round pick.
This has the potential to be the best draft the Broncos have ever had, and even if they stay put with all of those picks, they have a chance to make a real splash.
Here's to hoping they do.
With the new development from Mike Klis that Denver would require a second round choice in return for the services of Kyle Orton (not totally out of bounds), the Broncos could be looking at five picks in the top 70, and what a haul that would be.
From my last post, I concluded that there are no fewer than 10 teams who would be interested in acquiring a quarterback, and Orton is one of the top 15 in the game today. Even though his salary number seems high, it is not. Orton feels he is playing the best ball of his life, and it's likely a handful of NFL teams are going to inquire about his availability this offseason.
I have said from the beginning that Orton is worth a second or third round pick, and I'll stick to it. I have thought for a while now that Minnesota is the perfect place for Orton to land, and I still do. Minnesota could use their first round choice on a defensive back or linebacker, and nab Orton with their second.
That would give the Broncos the 11th choice in the second round in addition to their other picks, leaving this mock with a pick list of 2nd, 36th, 43rd, 46th, and 67th. This is a very enticing crop of picks, and I'm going to do a mock draft that features both a switch to the 4-3 defense, and one that sticks with the 3-4. Let's start with sticking to the 3-4.
1.  First round, 2nd overall:  Nick Fairley, Defensive Lineman, Auburn
6'5" 300
Yes, I know about Fairley's nasty nature. Yes, I know the issues that could come along with that, but right now, our defense is really soft. We could use some nastiness, especially in the trenches. With the 2nd overall pick, it looks like the Broncos are going to have their choice of the best defensive player on the board. Whether you stick to the 3-4 or not, Fairley is probably the best defensive tackle prospect in the draft, and is having a fantastic season. He won the Lombardi Award as the nation's best defender, and is absolutely feared by opposing offenses.
The Broncos need toughness and pass rush, and I don't know that anyone in the draft possesses both as much as Nick Fairley. 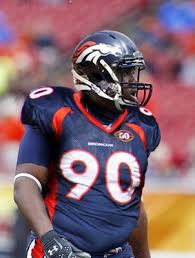 via SI.com
I have liked Paea for a long time, and he's fallen off the radar a bit. Not to me. I think this guy can be a big time nose tackle in the NFL. He has strength, quickness, and athleticism unlike many defensive tackles, and his low center of gravity can be just as much an asset as it is a detriment.
Picture a line that features Bannan, Paea, and Nick Fairley. That is a nasty threesome, and then you add in the rotation of Jamal Williams, Louis Leonard, Kevin Vickerson, and Marcus Thomas? That has the makings of a GOOD defensive line, and one that I would enjoy watching.
In addition to playing some nose tackle, Paea could rotate with Justin Bannan at the end position, and eventually take over at that spot as well if the Broncos feel they find a better alternative at the nose. Either way, I want this guy on my team. He is a hard worker, tough as nails, and he is strong as heck. Oh by the way, he's really good at football.
3.  Second round, 43rd overall (from Vikings):  Mikel LeShoure, Running Back, Illinois
6'0" 227

via The Sports Bank
If LeShoure is on the board in the mid-second round, it's an option the Broncos simply cannot pass up. Lance Ball is nice, Correll Buckhalter got his head out of his butt, and I like some of the young prospects the Broncos have, but a combination of LeShoure and Moreno is too tough to pass up. Moreno is obviously having durability issues, and you could definitely say that running backs are a dime a dozen, but this kid is special.
Being a big fan of the Big Ten, I got to watch LeShoure play quite a bit. He is the best running back in this draft outside of Mark Ingram, and he is going unnoticed because Illinois was not great this year (though they played great at times). He's got power, he's got speed, he's got size, and he's got vision. I won't be surprised if he completely out-shines the competition at offseason workouts and becomes the first running back off the board.
Right now, his value is in the second round, so that's where I have him. I would love for the Broncos to take this guy, but it's clear that running back in general is going to be a need. If Moreno misses significant time, I want to know that the guy behind him can carry the load. With Tebow at the helm, I think the run game will become more of a focal point.
4.  Second round, 46th overall (from Dolphins):  Brandon Burton, Cornerback, Utah
6'0" 187

via Utah Football
Brandon Burton can cover in the NFL, because that's what he does. Little tongue-in-cheek there, but seriously, this kid is solid. The deepest positions in this draft are quarterback, wide receiver, defensive line, and cornerback. That means that there are going to be serious bargains at the corner position in the second round.
With Burton declaring, I think an NFL team is going to get a real steal here. He's got good height and great speed, and while he was exposed a bit against Notre Dame, I think he has some real skill.  With the situation of Perrish Cox uncertain, as well as the ever-present question mark that is Champ Bailey, cornerback could be a much bigger point of emphasis than I would like. However, if the Broncos are able to secure Bailey (I don't see how they can let him go), then I think we can afford to wait until our second round picks come around.
5.  Third round, 67th overall:  Ahmad Black, Safety, Florida
5'9" 187

via Draft Ace
I know resident draft expert E.J. Ruiz will love this pick, and I am starting to agree with him. While compact, Ahmad Black packs a serious punch, and is one of the more underrated defensive backs in the draft. He's got speed, he's got toughness, and he simply flies all over the field.
Yes, he's undersized, but so is a certain Bob Sanders (even smaller yet). This kid will come into the NFL with a chip on his shoulder, and he will light people up. I hope he's wearing our shade of orange.
4-3 Mock
1.  First Round, 2nd overall:  Nick Fairley, Defensive Tackle, Auburn
See above
2.  Second Round, 36th overall:  Greg Jones, Inside Linebacker, Michigan State
6'2" 240

viaHeisman Pundit
Jones is a great tackler and a solid linebacker prospect overall. I wouldn't be shocked to see him drafted for either scheme, simply because the Broncos could use another starter at inside linebacker. I also wouldn't be shocked to see D.J. Williams traded, as I do not believe he is a good leader and in my opinion, he has worn out his welcome in Denver.
This guy is a tackling machine, and would be a solid addition at the top of the second round.
3.  Second Round, 43rd overall:  Martez Wilson, Linebacker, Illinois
6'4" 250

via Illinois Football
If you move to a 4-3, the linebacker corps needs a complete makeover, and one of my favorite linebacker prospects in the draft is Martez Wilson, who has the potential to be a top ten talent but is one of those risk/reward players. He was a highly touted recruit coming into his Illinois career, but an injury derailed his sophomore season, so he is a fourth year junior. He had a nice bounce-back season, and is just coming to form. With good coaching, he can be a superstar.
I wouldn't mind seeing this guy added to Denver's linebacker group.
4.  Second Round, 46th overall:  Brandon Burton, Cornerback, Utah
See above
5.  Third Round, 67th overall:  Ahmad Black, Safety, Florida
See above
**Trade:  D.J. Williams Traded for mid-third round pick, fifth round pick**
6.  Third Round (from D.J. Williams Trade):  Bruce Carter, Linebacker, North Carolina
6'3" 225

via Carolina Football
This is obviously a scenario where the Broncos don't add any new faces via free agency, but you think about gutting the linebacker corps and starting from scratch with three rookies, and it's a little scary, but it's enticing to me. Carter is coming off of injury, so you would have to keep guys like Mario Haggan and Wesley Woodyard around, but I think if he can tap into his potential, this guy has first round talent and has no business falling to the third round, which he most likely will.
This would give the Broncos a linebacker group of Greg Jones and Bruce Carter on the outside, and Martez Wilson in the middle. You could keep Mario Haggan, Joe Mays, and Wesley Woodyard as the reserves. I think I could live with that.
So there you have it. Two scenarios for the Broncos, and one will likely be eliminated within the next 10 days or less. The future, at least to me, is bright.