I was going to watch Super Bowl XXI, but when I saw the awesome disco intro graphics to introduce Monday Night Football, I couldn't resist. It is also appealing that I have no idea who wins this game. It's also the EARLIEST Broncos game I can find complete video of. 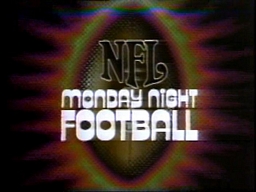 As before, I'll be writing as a haphazard time traveler with no regard for the safety of the space/time continuum.

Let me set the scene for you before I hop in the time machine. It's a crisp Monday night on Veteran's Day in Denver. The Raiders are leading the division with a 3-2 record and the Broncos are trying to catch up having gone 2-3. John Ralston and John Madden are your coaches. The all-time series stands at 20-5 in favor of the Raiders. That's all I know, let's get it on.

Ancient Uniforms - I was hoping for squiggle horse helmets, but I am denied. Ancient as this game is, the Broncos are wearing the orange uniform with the powder blue helmets. Both look notably darker than their 80's counterparts. Meanwhile, the Raiders' white road uniforms are so blazingly white that their defense looks like a giant, blob ghost. I guess what I'm trying to say is that 1973 video quality on a modern HDtv doesn't look so hot.

The Opening Drive - The Broncos got the kickoff and just looking at the starting lineups, I'm not feeling great. I can already see a Hall of Famer in the Oakland defensive backfield (Willie Brown) and journeyman Charley Johnson is slinging it for the Broncos. I expect to see some Brian Griese-esque fireworks.

Lineup Mismatches? - Four more Hall of Famers on the Raiders offense (Gene Upshaw, Fred Biletnikoff, Art Shell, Jim Otto). The commentators are skeptical about this inexperienced lefty QB named Ken Stabler. Is it pronounced "Stab-ler" or "Stabe-ler?" He's replacing Daryl Lamonica who is doing the Kyle Orton pout-dance on the sidelines. Incidentally, Stabler's got quite a gun. Early on, he overthrows a streak route by about 15 yards. Nevertheless, the Broncos are stacking the line, stuffing the (sad looking, old-timey) Raiders runs, and daring Stabler to beat them.

Scoop and Score - The Broncos defense grabs two sacks and forces a fumble which Billy Thompson takes back for a TD and the first quarter ends with Denver leading 7-0. Mile High is rocking!

Old-Timey - Earlier, I mentioned the Raiders old-timey, running game, but that's not the only thing that's old timey. Get this; the referee doesn't have a mic. The goal posts are INSIDE THE END ZONE. Field goal returners have been positioned for both of the Broncos missed field goals. There are no arrows painted next to the numbers on the field, so, at a glance, you can't tell which side of the midfield the ball is on. (I never realized how much I take those tiny arrows for granted.) There's a marching band and no recorded music in the stadium. Don Meredith praises the Broncos back-up halfback for having run a 5.18 in the 40-yard dash. College football is more popular than pro... except in Bronco Country.

Bonus Hall of Famer - Oh, just btw, the Raiders kicker is Hall of Famer George Blanda who boots his 300th career FG to make it 7-3 and gets a little ceremony. That makes six Hall of Famers on the Raiders, plus their coach. The Broncos have Floyd Little who's doing his best to slash through some very small holes. He looks more like a modern back than anything the Raiders have.

Awesome Chauvinism - Howard Cosell commented on how hot one of the Broncos cheerleaders was. It's a shame that all the machismo has been sucked out of NFL broadcasting. Or is it? Later, Don Meredith cracks a slightly homophobic joke about the Broncos defense holding hands in the huddle. It's closely followed by manly-mustachioed Bill Cosby in an advertisement for White Owl cigars. The tagline for these deadly tobacco products is, "We're gonna get you." Creepy. As. Hell.


Meltdowns - The Broncos have a complete coverage meltdown that gives up an 80-yard bomb and Jack Tatum comes flying out of nowhere to deflect a pass and turn it into a Raiders interception. The Broncos soft zones and man-to-man coverages can't keep up with Fred Biletnikoff. Lyle Alzado's 2nd sack stalls the Raiders two-minute drill and we go to halftime, 13-7 Raiders.

WTF is MasterCharge?!?! - Apparently you can buy things on credit with your "MasterCharge" Card? Gillette has just introduced a razor with two blades. I wonder what the 2nd one is for?! Also, tomorrow night, there's a made-for-TV movie called "The President's Plane is Missing." Can't wait.

Otis Armstrong - Much like Rod Smith in my last write-up, this rookie running back pretty much only returns kicks. He's a year away from replacing Floyd Little at HB and winning a rushing title. On the topic of Floyd Little, he's in his twilight here, but you can see the flashes of greatness without much blocking. He reminds me of Herschel Walker in traffic with his downhill slashing style. Being young-ish, and a time-traveler, I have to compare him to a RB I saw back in the future. Sorry if that warps your mind.

Old-Timey X's and O's- I can't help but notice that almost every offensive formation for both teams employs split backs. There are no ace formations or even an I-formation. Also, the commentators refer to traps as "draws" but they don't look anything like modern draw plays. They develop too quickly, and the quarterbacks don't bother to sell them as passes. Even the lineman give a run-blocking look right from the snap. The modern draw play is an infinitely more patient exercise. How far we've progressed. (We've also stopped worrying about "wet-head" which is something a bizarre hair-product promised to fix in a 2nd quarter advertisement. You use it if your head looks too wet all the time?)

"Razz-ma-tazz" - The Broncos resort to a halfback pass, a reverse to Floyd Little and a gutsy fourth-down plunge and cash it in for a Little TD. DE Paul Smith's 2nd sack and an unforced fumble hold the Raiders until Stabler starts firing lasers. Cliff Branch catches one in the end zone. 20-14, Raiders lead.

Commitment to Excellence - Don Meredith and Howard Cosell call one of the Raiders personnel moves a "savoir-faire" trade. Al Davis may have died from 38 solid years of media criticism.

More Hotties - After every big play, they cut to a young, brunette Broncos fan who is the epitome of a 70's beauty. In my last time-travel adventure, I commented on how superior 1996 broadcasting was to 2011. Aside from the hotty-cam, I can't say the same for 1973's Neanderthal graphics, disco music and dingbat commentary by Don Meredith. There's almost no analysis, just reporting. The halftime show is a technical disaster full of camera-switching mistakes (I do this stuff for a living, so I might be a little over-sensitive), but the slow-motion highlights on actual film were kind of neat.

Touchbacks - It doesn't matter where you spot it, even in 1973, most of the kickoffs go out the back of the end zone. BOOM! (For the record, kick-offs happen at the 40!) On the strength of their ground game and a few passes to young TE Riley Odoms, the Broncos scratch out two field goals.

QB Murder - Late in the 4th, with the score 20-20, two Raiders sandwich Charlie Johnson for what feels like a 25-yard sack. That is followed by a botched punt coverage by the Broncos that should have pinned the Raiders inside the 5. Instead the Broncos lose out on a FG and give the Raiders a touchback with 3:32 to go. My stomach sinks and not from the tachyon dephasle-fritzer that powers my time-traveling adventures.

QB Murder II - Paul Smith smooshes Ken Stabler at mid-field for the Broncos 6th sack, and guess who has to come in with under a minute remaining? If you said, "struggling veteran, Daryl Lamonica," you're right. He throws a pass to Cliff Branch who screws the pooch by voluntarily running backwards and costing Oakland a first-down. Stabler limps back in to placehold for George Blanda on the go-ahead field goal attempt and...

The 44 Second Drill? - The Broncos respond with a back to back draw plays to Joe Dawkins and Floyd Little to get into field goal range. Two timeouts preserve enough time for a 35-yard FG attempt for Jim Turner and...

The NFL began playing an extra period to decide regular season games in 1974. This was probably a reaction to the seven ties that went down during the 1973 season.

No, you cannot borrow my tachyon dephasle-fritzer.

Nevertheless, this was a fun game to revisit for the 70's presentation, old-timey offensive styles and to see skinny John Madden. He kinda freaked me out. Especially the side-burns. Should I have gone down there to tell him to layoff the Tur-Duck-En in the future?

I didn't realize this until late in the game, but having the goal posts at the goal-line, instead of 10 yards deep, radically alters the game. Field position is HUGE. A half-decent kick return puts points within reach and punter battles lead directly to scores. The closing four drives were all frantic because midfield is the edge of field goal range, which is insane to think about through the prism of 2011 football! The Broncos got the ball with 40 seconds left, ran a pass and two draws and tied the game. Why? Because the goals are ten-yards closer! Blew my mind.

There were a few moments early on when the Broncos really seemed to have control of the game. Stabler failed to recognize the pass rush on several occasions and clearly, hot-routes and outlets were never the Raiders' style. That led to the Broncos six sacks, which were their only line of defense. Given time, Cliff Branch and Fred Biletnikoff were downright uncoverable. The Broncos displayed zero vertical passing ability, (Haven Moses had one catch) but asserted themselves with the run, especially on the game-tying drive. If not for Charley Johnson's taking a foolishly deep sack on the Broncos' second to last drive, they may have gained the advantage. Conversely, if not for Branch's foolishly costing his team a first down on the penultimate drive, the Raiders would've kicked their field goal as time expired and won the game. Both mistakes cost their teams a W.

Player safety aside, is it cooler to have the goalposts in the endzone to provoke more field goal returns?