An Amazing Win Precipitates a Week of Broncos Related Creativity

Share All sharing options for: An Amazing Win Precipitates a Week of Broncos Related Creativity

Psssssst.... In case you missed it, the Broncos won in an amazing comeback last Sunday. It's because of this win that this week there was an explosion of quality pro-Bronco/pro-Tebow creativity on the internet and elsewhere.  While tribute and fun videos are plentiful, the quality and sensationalism of the ones produced this week is something that should be noted.

As a fun way to celebrate our amazing win this last Sunday, I'm corralling the most recent internet offerings and a few classics together in one post.   I'm sure I missed a couple.  Please share them in the comments if you've got some.  Join me after the jump for the internet's most awesome Bronco offerings from this week and all time.

2005 - Denver Broncos - Kanye West Gold Digger Parody - Though it's like nails on a chalkboard to me, it was a semi-well produced song.

2011 - Blue and Orange - This was an "homage" (ahem) to two songs that were created for other teams.  It's worth mentioning because of its production quality.

The Elway one is by far the best.  The other two are so notable because they're the really only significant ones (except for the ones that I'm sure are going to be posted below) to come out... Until this week.

South Park got into it too, click here to watch the whole episode online. With everyone wearing Bronco gear throughout, the best part is the Dolphins/Tebow commentary in the very beginning.  I would have embedded it, but there are some (quite a few) references in it that some (I'm sure there are more than a few) members might find objectionable.

Almost as if by design, the Tebow Documentary - Everything in Between - Released a blooper reel.

Tim Tebow: Everything in Between Interview & Production Outtakes from FCTN on Vimeo.

We Didn't Stop Tim Tebow - A friend sent this to me this afternoon.  It's more for the Dolphins, but it's very Bronco heavy.  Really funny.  My heart would ache for the poor Dolphins if I had one.

The Onion New Network got into the Tebow debate.  Satire at its best.

Then there's this whole Tebowing phenomena that burst onto the scene.  Here's Mark Schlereth doing it on the set of NFL Live. If you haven't seen it, check out Tebowing.com. 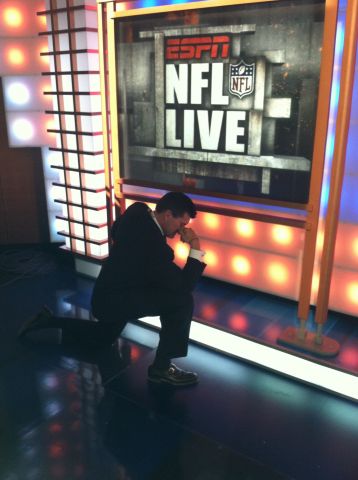 It's been a productive week indeed!  Hope you enjoyed this.  With the Detroit game looming this weekend, there's no telling how many more notable Bronco trends or videos will come out.