DRAFTING A FRANCHISE: The Worst Trade In Denver Broncos History

Share All sharing options for: DRAFTING A FRANCHISE: The Worst Trade In Denver Broncos History 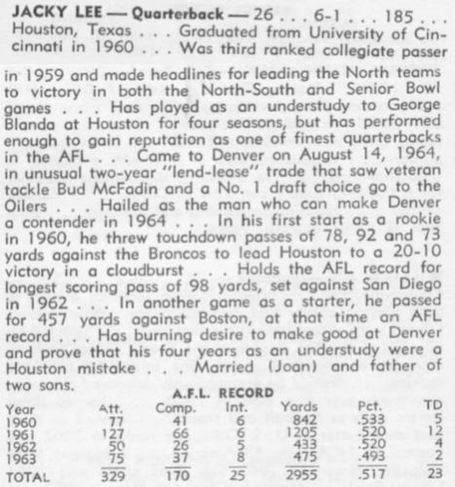 With the recent departure of Brandon Lloyd there were many Broncos fans that were upset that we let him get away for what now looks to be a 5th round pick. With the option currently roosting in the Mile High City, this trade may not have been such a bad idea.  Praise be to the Broncos getting some value for something they otherwise wouldn't have.  Who knows who we'll draft with this pick... It could be a future Hall-of-Famer... or it could be a bust.  Either way, I think as of now we can definitively say that this move was by no means, "The Worst Trade in Denver Broncos History."

No, that honor goes to a time when the Broncos were in their infancy.  We need to go waaaaaay back to 1963.  Follow me after the jump for the details on the trade that cost the Broncos a future Hall-of-Fame quarterback.

In 1963 the Broncos were only three seasons old and their quarterback, Frank Tripucka (who was initially hired on as an assistant coach and instead ended up a Ring-of-Fame quarterback) decided it was time to hang up his cleats.  This left the Broncos with the original #7, Mickey Slaughter, at the helm.  The switch at quarterback at first looked to be a wise decision.  The Broncos had lost both games Tripucka had started and now Slaughter had them right in the hunt by winning his first two starts.  Then the wheels came off the bus and crashed into the mountain.    The Broncos would lose just about every game thereafter (with the lone exception being a tie versus the New York Jets). Something had to be done.

Following the disastrous 1963 season the Broncos did this - to quote Drafting a Franchise 1961-1964 from earlier this year:

In the 1964 draft, the Denver Broncos traded (1960 free agent acquisition) Bud McFadden (DT/LB/OG/OT, Texas) and their 1965 first round pick to the Houston Oilers for Jacky Lee (QB, Cincinnati) who had been a solid back-up for George Blanda since the AFL was founded. Recent draftee Mickey Slaughter was injured following Frank Tripucka's hasty mid-season departure in 1963 and so it was thought that Lee would add much needed depth. On the surface, this looked to be a great trade for the Broncos, but below the surface, however, it was quite possibly the most short-sighted trade in Broncos history. Why? The trade agreement stipulated that Jacky would return to the Oilers after playing two seasons in Denver. Though we gave up a pick and a player, we were only loaned this quarterback for two years.

The 1964 season didn't pan out any better than the 1963 season. Another 2-11-1 record with wins over the Chiefs, Jets and a tie against the Raiders. Unfortunately, because the Broncos traded away their first round pick for the 1965 draft, the Oilers then had the first overall pick.  In case you're still wondering where the "worst trade in Denver Broncos History" comes into this story, this is it.  Why?

Because the Oilers had two first round draft picks in the 1965 draft they were in a position to part with one of them.  They traded the Broncos pick to the Jets in return for rights to Jerry Rhome - a quarterback the Jets had drafted in the 1964 draft, but who had opted to instead sign with the Dallas Cowboys of the NFL. For whatever reason, the Oilers must have thought they could coax him to the AFL.  Eventually they were right. In 1970 Rhome played thirteen games with the Oilers and started four, not winning any of them (in all fairness he did manage to tie one of teams).

So what did the Jets do with the first overall pick in the 1965 draft? They drafted future Hall-of-Famer and Joe Namath.

Quite possibly the worst trade in franchise history.  Broncos got a loaner quarterback that didn't pan out and the Jets got a legend.

Remember that the Broncos weren't able to sign any of their first round draft picks until after the AFL-NFL merger.  Had the Broncos retained the first overall pick in 1965 who's to say that Namath would have signed with Denver?  Namath was also drafted with the 12th pick in the 1965 NFL Draft by the St. Louis Cardinals.  There's a good chance that he'd have gone into the NFL leaving the broncos with nothing to show for their terrible 1964 season. One could easily understand his preference for New York over St. Louis, but who's to say that the boy from Alabama wouldn't have considered St. Louis an upgrade over Denver?  Then there's the possibility that Denver could have whiffed on picking Namath and picks someone else had they retained the pick.... Who knows what could have been.  It's all speculation at this point and we'll never know for sure.  Why?

Because of the Worst Trade in Broncos History.