I scored some last minute tickets to Sunday's game and decided to go. What a scene out there. Going to the Smuthole that is Oakland Coliseum I had a pretty good idea what to expect and Raider fan did not disappoint...

First off, here's a screenshot of Sunday's game from CBS that shows where I am sitting...I am the brightest orange spot in the stands in the left center of this pic. 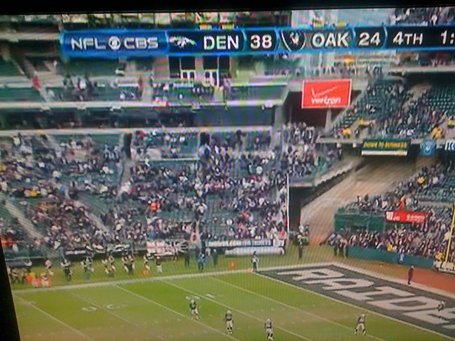 The craziness of this trip begins about 65 miles down the road a little outside of Fresno. I'm driving down the North Hwy 99 and I am passed by a truck with a BBQ and Raider flags bristling in the wind...as they pass me they notice the bright orange #15 Tebow jersey I am wearing and the fingers start to point and the fists start to shake. "Boy, are we in for a long day", I tell my buddy who is wearing my throwback orange Elway jersey.

The next moment happens as we are in traffic outside the Coliseum still on the freeway. As we are approaching the exit at a virtual stand still, a Raider fan wearing a black on black Flea Market version of a Darren McFadden jersey emerges from the bushes on the side of the highway, then proceeds to hop a fence to gain entrance into the Coliseum...now we begin to get a little concerned of what exactly we got ourselves into.

Arriving at 1130am probably wasn't the smartest idea on my part, since the entire parking lot was already full. We ended up finding a spot pretty much in the area where the guy had jumped the fence to get in. So we are parked damn near as far away from the stadium as you can get. What comes next is our walk down the Black Mile...a bastardly crew of social misfits heckling, dropping F-bombs every few seconds..."F*** Tim Tebow and F*** You too, F**k the Donkeys, etc, etc, etc, etc, etc, etc, etc." As we walk, a bottle cap nearly misses my friends face. I tell him to start recording from his phone so we can have a good laugh later about this walk. He was afraid to point the camera toward anyone so what we end up with is just a view of our feet walking in...but the audio picks up pretty well and paints a vivid picture of the scene..The Black Mile Walk.

As we walk closer to the entrance of the stadium, a young girl tells me that the Broncos suck and I can suck her d*** after the game. Wow, just wow.

So now we are finally inside the stadium and we get to watch the players warm up. I go down to the very front and watch on as Tebow works with the receivers. Tebow looks surprisingly sharp and is throwing tight spirals for the most part. He hits in stride on about 8 straight 45 yard sideline deep routes. I begin to think of the possibilities once he starts setting his feet better in the pocket during game time. 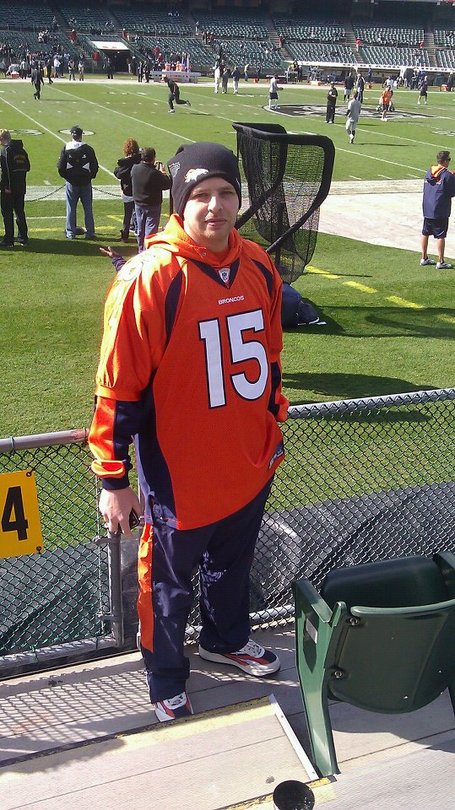 Fans slowly start to pile in and we make our way to our seats, hoping we luck out and a few of the possible 100 or so other Bronco fans sit near us. Not to be. We end up drawing a mixed bag of old, young, male, female and 90% ignorant drunk Raider fans. The guy in front of me performs the 10th or so "Tebowing" I have seen directed towards me. That wasn't the last time he would "Tebow" this day. One of the Raider fans behind me is wearing a San Jose Sharks shirt so I break the ice with him by talking about the playoff goaltending failures of Nabokov from year's past.(Go Avs!)

More fans draw in and the start of the game is near...I see Pat Bowlen, Brian Xanders, and the Mag 7 himself stroll through the field... 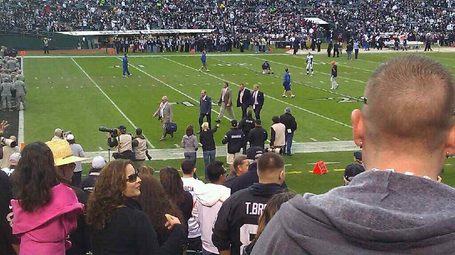 Biletnkikoff or some Raider I don't care about lights Al's Hell Flame and we are ready for kickoff! I don't know what it is but the emotion of a Broncos game I'm at that is about to get under way darn near brings me tears of adrenaline every time. The entire crowd is on it's feet and that does not change for the entire game. That is something that was awesome about that crowd. The entire game every fan seemed to be on their feet and there was no one bitching about people obstructing their view. It made for a great atmosphere, I will give the Raider fans that. However, many of them were not able to keep it at just that, lol. Sidenote: the guy in the Tim Brown jersey in the photo above was the jackass who kept turning around and "Tebowing".

The "Tebow Sucks" chants were loud and consistent throughout the game. Even while the Raiders were kicking extra points that's all that could be heard. A Raider fan next to us wearing a new Carson Palmer jersey told us how Carson would take the Raiders to the Promised Land. He was actually a fairly decent fan, but a bi-polar of some sorts, because one minute he'd be talking friendly with us and the next he was dropping F-bombs at us, haha.

The Raiders organization unfortunately caters to the thug mentality of the fans. After every score, they would play their local legends, 2Short and Ice Cube and the fans would go into a frenzy...a guy a few rows in front of us actually lit up and started smoking weed when they showed Ice Cube in his private box on the tv. The stadium does have a security measure in place for conduct violations as well...you are supposed to text 'OAK' to some number. Too bad the entire stadium is a complete dead zone for cell phones, so if we felt our safety was in question, that text wasn't helping anything. 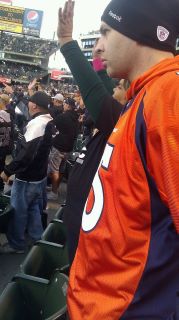 The Raider fans were at their worst around the time their team went up 24-14. Fights were breaking out above us and to the left of us. Meanwhile on the field, the Broncos fought on. The Raiders D-Line was beginning to look tired from chasing Tebow and McGahee around all day. As they were trying to catch their wind on the sidelines, with the Time of Possession currently around 24 min to 20 minutes in the Broncos favor, Carson Palmer's pass is tipped and intercepted by Chris Harris. Huge play. Especially since the 3rd quarter was not over and the Oakland D had to go back out there without an extra 5 minutes or so during the commercial break to rest up. McGahee then springs free for the long TD run to end the 3rd quarter, tying the game going into the 4th.

The Broncos offense seemed to have opened up a bit and was gaining confidence, and with that the "Tebow Sucks" chants were starting to sound a little less inspired as doubt was beginning to set in to the Raider faithful. Then Eddie Royal houses the Lechler punt. During that whole play I am yelling, "Take it to the house Eddie!" And once he does and the beer cups start to fly from the Black Hole I begin to anticipate beer cups being thrown towards me. It doesn't happen yet.

Then McGahee seals the deal with his 2nd TD and does a half Tebow-half Mile High Salute toward the Black Hole and the cups and objects really start to fly. I love it! Except now I'm thinking, "c'mon Willis, I gotta try to get out of this parking lot amongst these 60,000 morons and you gotta get them even more pissed at Broncos Country?" LMAO, total awesomeness though. A couple Raiders fans begin to fight in front of us and I marvel at the stupidity that is the majority of this fan base.

The Raider fans start to pile out of the stadium and as they do, they remind me, "Tebow still sucks." I laugh it off and basque in the glory of a Broncos win at this Hell Hole. I make my way back down toward the front of the stands near the Broncos sideline. The final seconds tick off the clock as me and around 20 other Broncos fans are gathered as Julius Thomas takes the time to chat it up with a few fans. I wish Virgil Green would have made the trip because the buddy I brought with me went to High School with him and had talked to him during the week about getting some items from a few of the payers, but he was inactive and didn't make the flight. While gathered there, a Raider fan takes the opportunity to throw a beer toward the Bronco crowd which ends up on a little girl's jacket. Stay classy, raider nation. I later run into a man wearing a Julius Thomas jersey in the parking lot who says he is Julius' father. I told him his son is a class act.

On our way out, we are clinching our jaws shut, half expecting to be blindsided by a sucker punch from someone in the crowd. The Raider fans are a bit more quiet now, but there are still F-bombs directed our way the entire time through the concourse and parking lot on the way back out to my truck. Thankfully, the girl who told me I was going to have to suck something of hers is no where to be seen. A beer can is tossed at my feet as another "F*** Tim Tebow" is slurred my way. A man throws potato chips at us while we walk by. A beer cup sails by us. It is too hard to put into exact words the feeling that comes from attending a game like that. But I am damn glad I did.

How the hell did I make it out of there in one piece?