Share All sharing options for: Denver Broncos Greats... By The Numbers - Rich Karlis

The Greatest Bronco To Ever Wear #3 - 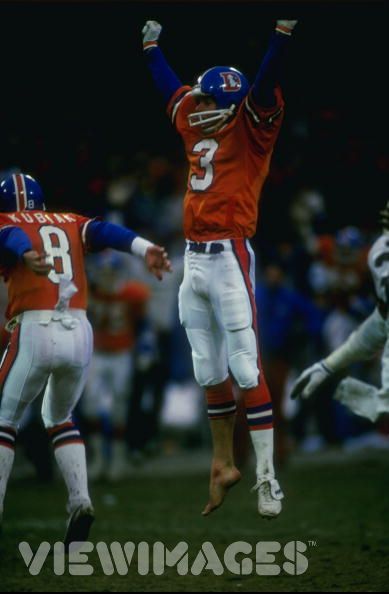 Was there ever any doubt?  Sure, the list of Broncos to wear #3 isn't that awe-inspiring, but could anyone but Rich karlis get the nod?  Just based on the fact that the guy was a barefoot kicker makes him a great in my book, then top it off with the OT field goal against the Browns, in Cleveland, kicking in sub-zero temperatures on green-colored dirt, and he is as close to a sure thing as anyone on this list.

While Karlis will always be remembered for that kick, that even to this day Browns fans will tell you was wide-right, the rest of his career wasn't all that bad either.  Playing for 3 teams over a nine-year career, Karlis made 172 field goals and 283 extra point attempts for 799 points and also holds Super Bowl records for most field goals attempts with six, and other records including most consecutive field goals made as a rookie with thirteen in 1982.

Perhaps the greatest story about Karlis comes from his short stay with the Minnesota Vikings.

Karlis's wife had apparently spoken badly about the Viking's O-lineman, who she felt were becoming a bad influence on her husband.  When word got back to the "slobs" they vowed to get even.  Get even they did, when one day before practice they captured Karlis, tied his hands and feet, stuck a gag in his mouth and blind-folded him.  After tossing a rope over the cross-bar, they strung Karlis up by his feet, placing a sign on his jersey that read, "Wife talked about offensive line."  Let that be a lesson to all you kickers out there.